At the foot of the Brooklyn Bridge, City Hall Park lies in a cold-stone land where law and order rule. The area is defined by French Renaissance-style courthouses and municipal buildings. The NYPD’s headquarters is across the street and the Manhattan Detention Complex, colloquially referred to as “the Tombs” by many, is a short walk away.

The location is ideal, all social services are free and property values show no sign of going up.

While the park provides one of the only green spaces in the concrete-scape of Lower Manhattan, it does not have a laid-back, community ambiance the way that many smaller New York parks do.

Historically, City Hall Park has been frequented by government workers taking lunch or smoke breaks and tourists milling around the historical buildings. But in the past three weeks, the park has undergone a change. The northeast corner, situated between City Hall, the Tweed Courthouse, the Surrogate’s Court and the Manhattan Municipal Building, is now home to a new neighborhood of the most unlikely sort. The location is ideal, all social services are free and property values show no sign of going up.

On June 23, a week before the city’s 2021 budget was to be decided by the City Council, Black Lives Matter activists, largely organized by racial and economic justice advocates with VOCAL-NY, began camping in the park, demanding the city defund the NYPD at least $1 billion. Throughout the first week of the occupation, hundreds and sometimes thousands of people filed in. They attended teach-ins, watched film screenings, took off on marches and participated in discussion groups and assemblies.

Police constantly lurked (and still do) around the perimeter of the encampment, but police-protester altercations only escalated a handful of times, the peak of which was marked by two early mornings when protesters barricaded off the intersection of Centre and Chambers Streets and police tried to break up the encampment. 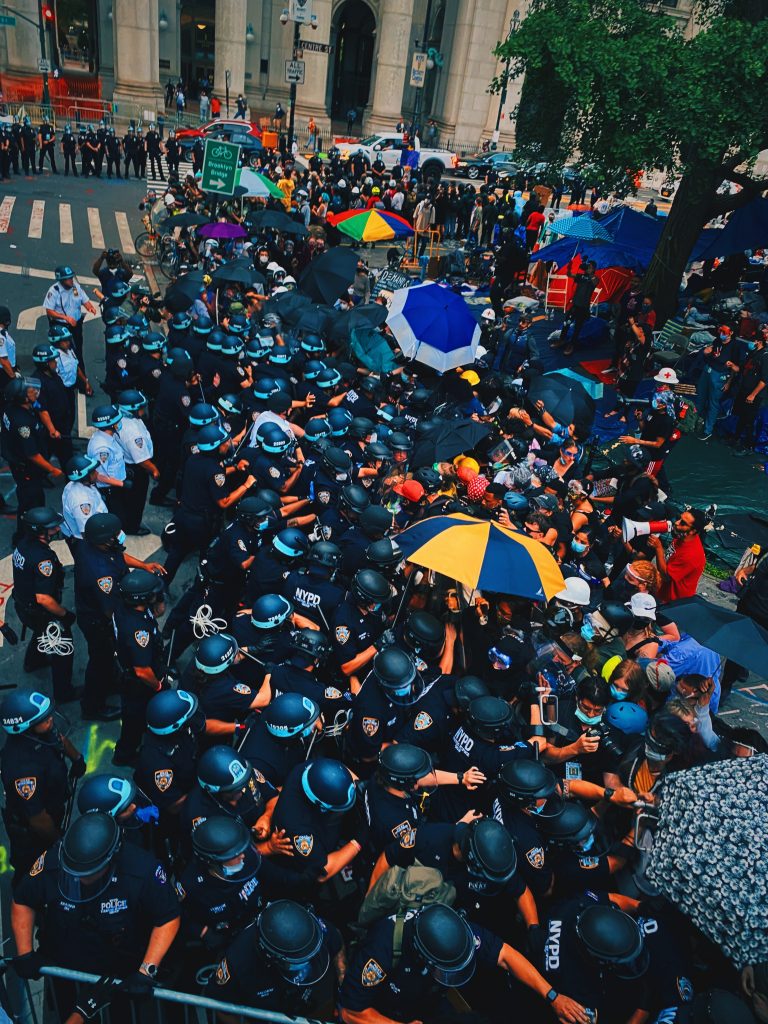 The NYPD attempted to evict the encampment but have since taken a more hands-off approach. Photo: Lukas Canan.

Between June 30 and July 1, three people were arrested, one of whom was pepper-sprayed. Since then the police have largely taken a hands-off approach, though the surrounding public buildings are now covered in Black Lives Matter graffiti and police barricades have been repurposed to wall off the cops from the park.

Although many occupiers left in the first couple days of July after the City Council failed to make the meaningful cuts activists had demanded, a core group of about a hundred overnighters have stayed with the goal of making the park a more permanent autonomous zone dedicated to the abolition of the police and the capitalist structure that profits from policing and the promotion Black liberation.

What was born as Occupy City Hall is now known as Abolition Park.

To the random passer-by, the encampment’s previous iteration, with its jovial atmosphere and tables offering food and literature might have seemed like a temporary carnival or market.

Now, the encampment is more established.

Tarps made into tent-like structures provide shelter from the heavy downpours and sweltering humidity that mark New York summers. The park is covered in abolitionist art. Painted on the slabs of the concrete grounds are murals of Breonna Taylor, George Floyd and others who have lost their lives at the hands of the police. In addition to “ACAB” (all cops are bastards), “FTP” (fuck the police) and “Death 2 America,” neighborhood graffiti declares that “[Franz] Fanon lives,” “Racism is not getting worse: it’s getting filmed,” and “Cancel rent: None are free until all are free.”

While some of the original supply stations have shrunk in size, food, water, PPE, clothing and personal hygiene necessities are still provided. There are tents dedicated to mental and physical health needs.

Regular democratic assemblies are what pass for community board meetings at Abolition Park.

“There’s an engineer here that’s getting supplies to make a reliable shower,” says Ryan, who, like all of the Abolition Park denizens interviewed for this article, declined to provide his last name for fear of reprisal from law enforcement. “Cleanliness and hygiene is safety at the end of the day and we’re here to keep people safe. Someone already tried to deliver port-a-potties but the cops told him they would arrest him and confiscate his truck and the pots, so he left.”

Locals are also in conversations with an architect to upzone their neighborhood by rendering the tent structures more fortified and permanent. Regular democratic assemblies are what pass for community board meetings at Abolition Park.

“The community meetings are open to everyone,” Victoria, a central organizer who facilitates the assemblies, tells The Indypendent. “They’re focused on building consensus around the community culture, community agreement and community accountability, and also getting people to take responsibility for the ongoing maintenance of this space. Over the course of the three or four meetings, we ended up with 14 community agreements that we all agree to be holding ourselves accountable to.”

“We are here for Black liberation,” reads Abolition Park’s statement of purpose. “We are building a world free of oppression, abolishing white supremacy, normalizing a system of mutual aid and solidarity, and giving all power to all people by centering, listening to, respecting, and learning from Black women and Black voices.”

The protests and educational activities that were initially organized in a daily play-by-by agenda are beginning to become a natural part of the rhythm of living in the park. Readings, screenings and political discussions about how to lay the ground for a better future continually occur.

The park represents a cross-section of New Yorkers. Artists and thinkers of all kinds, scholars, lawyers, architects, unemployed restaurant workers and the like convene to ponder and plan, to unlearn and rebuild. “A lot of people see this as an educational space, a place for making connections and a place for building relationships with other organizers, other people in the movement, sharing ideas and resources,” says Victoria. “We are collectively engaging in live-action abolitionist practices.”

The camp is home to a number of homeless people, quite a few of whom have helped with its organization, as they are more familiar with how to live on the streets. There are many shelters in New York City that might provide more protection from the elements than City Hall Park, but the homeless at the camp have chosen to be a part of the encampment’s conscious community.

Housing is at the forefront of most residents’ minds when they consider the systematized racism prevalent in New York and the wider United States, especially during a summer when the threat of eviction looms for so many. Many occupiers see providing resources at Abolition Park as a step in the direction of a world free of housing crises.

“What do we mean by abolition?” says Cassie, who helps run the neighborhood’s library. “We don’t just mean taking police off the streets and breaking people out of cages, although we do mean that. We mean a world in which everybody has what they need. We mean care, not cops. We are trying to amplify that tendency within the camp.”

At Abolition Park’s library there are discussions focused on “Black liberation, police and prison abolition, the history of Black radicalism, indigenous struggles and relating these to other struggles of the present,” she says.

The occupiers have agreed upon an all-encompassing framework that centers Black lives in its goal of abolishing the police and de-colonizing housing, education and healthcare systems. What felt like an immediate need to “burn it down” during the first week of occupation is in the works of being replaced by a more substantive plan to build up and create a prototype for a world free of chains.

The current period of change has been marked by some difficult moments. There have been instances of physical fights and sexual harassment. Addressing these conflicts is an issue that has been brought up and voted upon at assemblies. Initially, de-escalation teams dealt with disagreements but occupiers decided this tactic mimicked policing. Now a strategy of communal accountability has been adopted, with campers independently stepping in to deescalate situations that might become dangerous.

“Once you have created a police-free zone and you are committed to maintaining it as a police-free zone, then you have to come up with lasting alternatives to all of the conflicts that the police were originally expected to address,” says Victoria.

Heated theoretical and organizational debates often occur at Abolition Park as well, which organizers see as necessary for forwarding community growth. Creating, in real-time, a blueprint for what a cop-free world will look like is a substantial feat, considering that many residents of Abolition Park are still reeling from recent traumatic violence visited upon them by the police during the protests that have roiled New York since May.

“I do hope that once we demonstrate that safety, health, community and compassion don’t have to exclude all of the people of our society that we’ve been so comfortable excluding from those things, that once we can include and incorporate and value everybody and still provide a place where the most vulnerable feel safe, then I hope it spreads,” said Victoria. “I hope it becomes a model for other people and other places. I hope it becomes a model for New York City. I’m not an anarchist. I believe in structure. I believe in the capacity of humans to collectively organize. What we just need are better models.”

Infrastructure to establish future occupations and autonomous zones have been born out of Abolition Park, while similar efforts have simultaneously blossomed in different parts of the city.

Since the outbreak of the pandemic, A New World in Our Hearts, an anarchist network, has supplied fifteen free refrigerators around the city. On First Avenue between Ninth and Tenth Streets, Radio Bonita has established the “Free Crib at the People’s Space,” where they offer workshops led by community members, water and food, to-go protest and living supply kits and a place of rest. At 1214 Dean Street, where Crown Heights Tenants Union and Equality for Flatbush led an eviction defense until last Saturday, a supply and resource table was quickly erected for protesters who stayed overnight to protect tenants from landlord harassment.

Pat Rough contributed to this article.