The global crisis of COVID-19 has lasted long enough for us to see books published on how we responded during its early days. If you take a break from doom-scrolling to read Pandemic Solidarity you’ll learn how we launched the largest mobilization of mutual aid projects in history, through firsthand accounts from 18 countries and regions that offer “templates and maps for the future,” as Rebecca Solnit writes in the forward.

A decade ago, Solnit wrote A Paradise Built in Hell, about similar projects that followed five disasters, including the earthquakes in San Francisco in 1906 and Mexico City in 1985, documenting how people collaborated at the local level without succumbing to fear or resorting to authoritarianism. She says she found “horizontal democratic means were what worked, over and over, in place after place.” 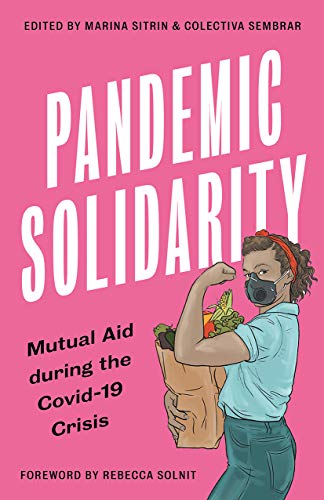 This new contribution to disaster sociology is an edited volume of essays and interviews from the Middle East, South and East Asia, Southern Africa, Europe, “Turtle Island” and South America. The collection was compiled “based in part on who knew someone who might want to do this, and could, in such a short amount of time,” writes editor Marina Sitrin. “Decisions were never based on where there were known solidarity groups and networks, as I assumed they were everywhere. And they are.”

Sitrin is perhaps the perfect person to edit this project, given her background as an international activist and academic who previously wrote about horizontal organizing in Argentina and Greece. She collaborates with Colectiva Sembrar, a collective “dedicated to facilitating voices of those less heard who are… creating a new society in their actions.”

In addition to contributions from people engaged in immediate responses like food distribution that rely on long-established networks, the essays include key insights from disability activists in South Korea who call for support that promises “more than mere survival. We also here from members of emerging civil society networks in Zimbabwe, Mozambique and South Africa, like the C19 People’s Coalition, started in March 2020 with about 300 organizations.

“[T]here is something about the time of the crisis and the possibility that the coalition has afforded to have people sit down and actually work together regardless of their differences,” says member Kelly G., in an interview. “The kinds of relationships that have emerged out of that have been very important.”

“Solidarity is a must. We don’t have a choice,” adds South African permaculturist Chuma Mgcoyi. “No one knows actually what will happen tomorrow and who will need whom.”

Many contributors note the foundations for mutual aid networks that already existed in their communities and cultures, like the Nguni Bantu concept of ubuntu in Southern Africa, often translated as “I am because we are.” Organizers in Lisboa, Portugal, describe a community-based solidarity initiative they launched called the DialogAR Network, which brings together four collectives to offer mental health services like “solidarity listening” and legal help, focusing on immigrants and low-wage workers during the pandemic.

“Even ordinary disasters never really end,” Solnit has observed. Members of Colectiva Sembrar note: “This is a story without end.”

The Common Ground Collective’s work in New Orleans after Hurricane Katrina in 2005 shows the long term impact a project started in response to a disaster can have. In his 2011 book, Black Flags and Windmills, Scott Crow describes how he joined with former Black Panther Malik Rahim to fill the void left by FEMA and bring volunteers together to gut houses, distribute food and keep racist vigilantes and police at bay. Afterward, they went on to provide resources like a free health clinic that continues to offer care today.

Crow recalls a moment at Rahim’s kitchen table back in 2005, “when I was joking with Malik about how we were already doing things [that] hadn’t been done in [a] long time. It was weird to know it at that time. Then over the months it started to grow, despite all the challenges.”

Only the state can mobilize the trillions of dollars in public spending needed to lift us out of an economic depression. But whether or not we will see that kind of enlightened governance starting in 2021 will be an epic battle that depends in part on the outcome of a presidential election that is as uncertain as the length of this pandemic.

Amid the vagaries of politics, we can keep shared human needs in the foreground by scaling up mutual aid projects like those described in Pandemic Solidarity.