About 100 Black Lives Matter activists from Bayside, Queens and other anti-racist, abolitionist demonstrators visited the home of Patrick Lynch, president of the Police Benevolent Association, to demand accountability and the dissolution of the PBA.

The activists marched Wednesday from the nearby Auburndale LIRR Station and were greeted at his home by a large array of unidentified men in civilian clothes and regular uniformed police officers from the 114th Precinct in Astoria.

Lynch did not make an appearance.

Local Black Lives Matter activists and victims of police violence called for defunding the police and decried the PBA’s role in defending officer misconduct and smearing victims of police brutality. From Lynch’s home, marchers moved on to the 111th precinct on Northern Boulevard, then dispersed without incident.

In the 16 years Lynch has led the PBA, he has consistently defended the right of police officers to use deadly force. He has defended police violence and weaponized the PBA against even moderate efforts to reform the NYPD.

On August 15, Lynch and several hundred NYPD officers endorsed Donald Trump for president, marking the first time the organization has made a presidential endorsement in 36 years.

“That’s how important this is,” Lynch said, adding of the president: “You’ve earned this.”

In response to the protest, Lynch said that “New York City police officers will protect your right to protest wherever it can be done safely and legally” —  an assertion greeted with derision by Black Lives Matter activists.

“New Yorkers have witnessed NYPD beat, mace, brutalize, choke, kidnap, run-over and mass-arrest protesters,” said MJ Watson, an activist from Queens’ Woodside neighborhood. “Many of these incidents of police violence are on video, and many more are not. Police do not protect people and they do not protect the right to protest. Police protect two things: property and each other.” 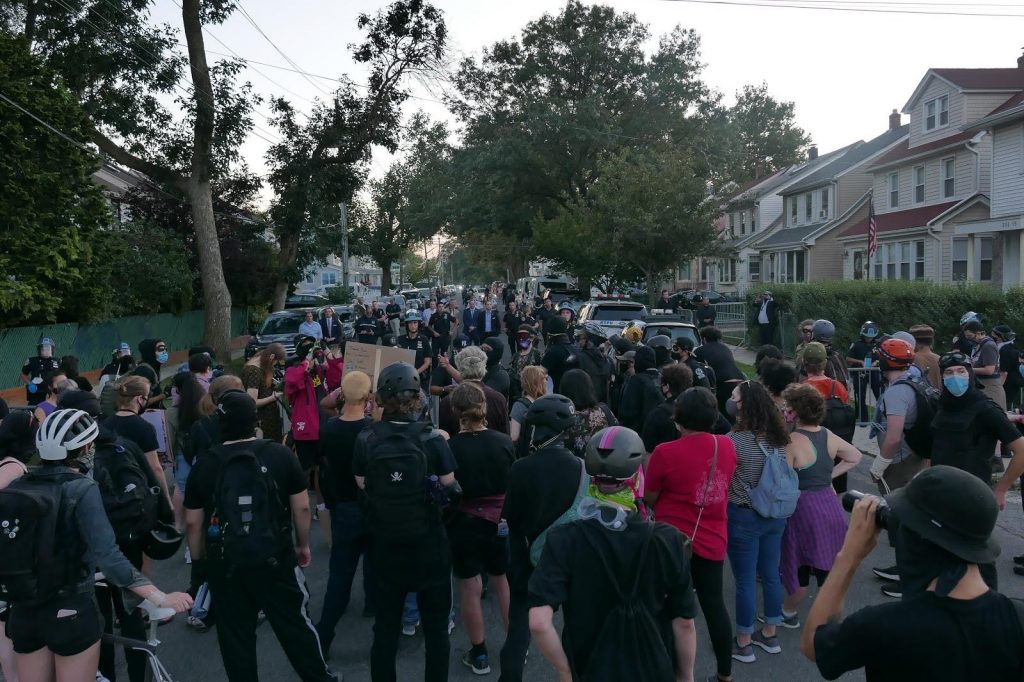 Demonstrators congregating outside of Lynch’s home on Wednesday.

As citizens and advocates press for criminal justice reforms, it becomes increasingly obvious that police unions are a primary obstacle to accountability and there are growing calls to disband police unions across the United States. The visitation to Lynch’s home marks a tactical escalation in Black Lives Matters’ struggle to end racist policing.