The Indypendent
Menu
A Free Paper for Free People
Illustration by Morning Brew. 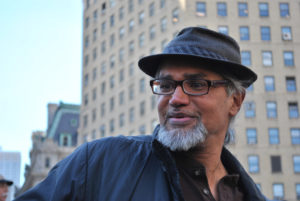 Protesters recently held a month-long encampment on the sidewalk outside City Hall. Their demands were to defund the NYPD if not abolish it altogether in favor of healthier ways of protecting community safety. It’s time to add Immigration and Customs Enforcement (ICE) to the list of lawless law enforcement agencies that need to be done away with.

I am lucky to still be here in the United States, fighting my case, but stories of NYPD supporting ICE continue.

ICE was created as part of the Department of Homeland Security after the 9/11 attacks.  It is a rogue agency with a $7 billion annual budget that is almost as large as the FBI. It is vested with sweeping immigration enforcement powers that they claim can’t be reviewed by state or federal courts.

Since Donald Trump rode a wave of nativist bigotry to the White House and escalated ICE’s assault on immigrant communities, New York City’s political leaders have sought to distance the NYPD from ICE, at least rhetorically. New York claims to be a “sanctuary city” whose police force will not collaborate with ICE. But, in practice, it is not.

In January 2018, the NYPD helped ICE arrest and remove me from New York City to face deportation. The cops blocked protests, arrested elected City Councilmembers Jumaane Williams and Ydanis Rodriguez, among others, and accompanied ICE when its agents took me away.

I am lucky to still be here in the United States, fighting my case, but stories of NYPD supporting ICE continue. In February, Eric Diaz was shot in the face when ICE tried to arrest his mother’s boyfriend, Gaspar Avendaño-Hernández, who was also injured in the encounter. The NYPD helped ICE with the removal of Mr. Hernandez from the hospital to face deportation from a county jail where he was held by ICE.

Beyond headline-grabbing events like these, the NYPD stands ready to assist in other more pervasive ways. There are 176  convictions that trigger the NYPD to alert ICE when they have a non-citizen in custody. Offenses on the list include falsely reporting an incident in the second degree, fleeing a police officer and patronizing a prostitute. Although some might argue that these arrests are reasonable, in reality, the consequences of deportation are devastating to families and lead to more fragile and less stable communities.

After New York deemed itself a “sanctuary city” in 2017, ICE ramped up deportation raids in the following year. The Intercept reported a “dramatic increase in coercive tactics.” They also reported that in one six-day period, ICE conducted 200 arrests in New York City. During another sweep of the city, Long Island and Hudson Valley in 2019, 118 undocumented people were arrested over five days.

When immigration officials arrive at homes to conduct arrests, they often misidentify themselves as police, and people are more likely to let them in, even when the officers don’t have warrants.

In February, ICE requested the deployment of border patrol agents, known as BORTAC, to sanctuary cities across the country to participate in a three-month-long boost of deportation raids and surveillance. BORTAC officers, usually stationed at the southern border, are special forces with sniper training. They are the same SWAT teams that were sent to quell protesters in Portland.

ICE’s unchecked power to disappear longtime residents of our communities at a moment’s notice is reminiscent of the Gestapo in Germany. That agency, like ICE, had carte blanche to operate without judicial review. As ICE increases surveillance of immigrants, protesters and activists who dare to speak out against it, we must worry that there are no consequences to its destructive actions.

The United States is in the throes of a very deep and important discussion about racism and the harm it causes. The 1964 Civil Rights Act should have been a  turning point in realizing the egalitarian dream of Martin Luther King. Instead we have seen a deeply rooted racism and white supremacy flourish as the Trump administration pursues its vision of white nationalist ethnic cleansing.

When I read Frederick Douglass’ “What to a Slave is July 4th?” speech my eyes brim with tears and my heart is torn by his words: “Cast one glance, if you please, upon that young mother, whose shoulders are bare to the scorching sun, her briny tears falling on the brow of the babe in her arms. See, too, that girl of thirteen, weeping, yes! weeping, as she thinks of the mother from whom she has been torn!”

Douglass gave his famous speech in 1852 soon after the passage of the Fugitive Slave Act, which forced  authorities in free states to return fugitive enslaved persons to their enslavers, penalized officials who did not arrest an alleged runaway slave, and made them liable to fines. It is impossible to not see the parallels to ICE officers who have the power to arrest and remove human beings from their communities.

ICE has destroyed millions of lives. It is not an agency that can or should be reformed. It should be defunded and abolished, along with the other structures within the Department of Homeland Security that brazenly violate human rights.

Ravi Ragbir is the executive director of the New Sanctuary Coalition.

Amba Guerguerian contributed to this article.