Walk through Brooklyn’s Sunset Park neighborhood and you’re apt to see activity. In the park itself, which takes up an entire hillside and provides a nearly unimpeded view of the Manhattan skyline, there are quinciñeras and BBQs. Elderly Chinese men and women plaza dance and kids play. Couples sit on blankets and on flattened cardboard boxes to admire the view and the air, to feel the presence of other people.

The park is both a symbol and the geographic and emotional epicenter of a neighborhood. It feels like a Jane Jacobs dream — an example of organic urban diversity and the precise kind of bustle that makes a community thrive.

With just a short jaunt to the neighborhood’s northwest, you will find Industry City. It consumes 35 acres of the Brooklyn waterfront and looks like a massive mall designed by Williamsburg hipsters. The sidewalks are eerily clean, the grass is the artificial green of an apple-flavored fruit snack. The refurbished industrial space has the feel of a giant tech meet-up or a workplace sponsored happy hour. And it represents the slow, agonizing strangulation of a New York.

Now, Industry City wants to expand beyond its well-kept walls and encroach even further into Sunset Park, bringing its colonizing aesthetic to a community that has been vocally against the project from the start. Despite overwhelming opposition to the proposed expansion, with residents citing job loss and displacement as their primary fears, the City Planning Commission approved Industry City’s rezoning application by 11 to 1 this month. Their approval went against City Councilman Carlos Menchaca, Sunset Park representative, who, under community pressure, recently said he would reject the expansion.

While Industry City is leaning on its promise to create thousands of jobs in a now wounded economy, they have failed to answer the most critical question — put forth in a statement from Menchaca on Aug. 19: “Jobs for who?”

The councilman isn’t opposed to all development, however, favoring a Green New Deal plan put forward by Sunset Park environmental justice organization UPROSE. The group is calling for the waterfront space to be repurposed as a regional production hub for renewable energy, which would mean light industrial jobs that local residents could obtain.

Currently, many Sunset Park residents rely on the neighborhood’s manufacturing sector for good-paying jobs. As part of the proposed expansion, sections of the neighborhood would be rezoned to allow for commercial use, meaning manufacturing jobs would most likely be replaced by big-box stores, hotels, and tech-driven workplaces. Uprose’s vision, by contrast, emphasizes neighborhood sustainability through solar and wind installations, creating jobs for current Sunset Park residents while also making the community more resilient to climate change-related events.

“People aren’t sitting around thinking, ‘I want to have a factory job just like my grandparents did in the 1940s or ’50s,” Kimball said in an interview with Patch News. “They want to be in innovation industries that have a really bright future and those are the kind of sectors we’re bringing here.”

But even if the expansion were to provide jobs to Sunset Park residents, Kimball misses a broader point: He can’t pretend to know what’s best for a community that has been vocally opposed to his “neighborhood betterment” campaign from the start.

As a privately-owned mini-neighborhood, the streets people walk on at Industry City offer only the potential for profit, not for any sense of collective community cohesion. It’s marketed as a “retail destination” selling high-end housewares and $18 cups of coffee. It’s home to a famous “food hall,” which is only one step above the grimy mall food courts suburban kids grew up in, only it offers craft beer and bento bowls instead of hot dogs and slushies. Just because the restaurants in the food hall aren’t fast-food chains doesn’t mean they don’t serve the same purpose: homogenization of our habits and our cityscapes.

The City Council has until November 4th to vote on the proposed rezoning. While it is tradition for the City Council to defer to the local representative when it comes to issues of rezoning and land use, Industry City may prove to be an exception. Other Councilmembers have been vocal in their support of Industry City. 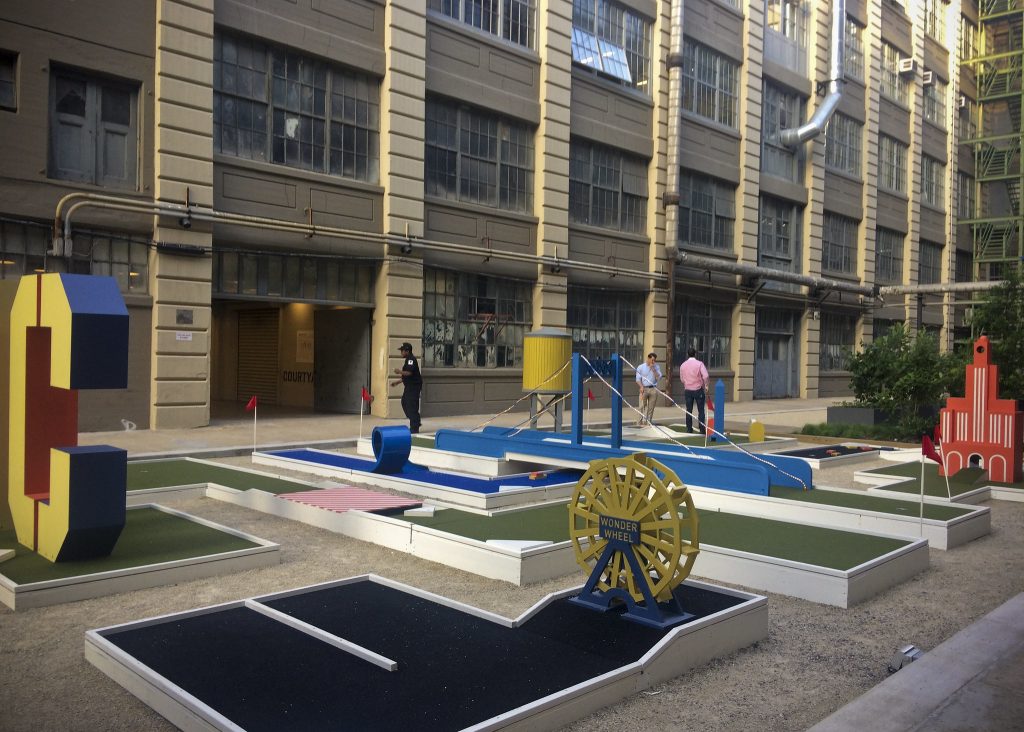 To ram the expansion through over Menchaca’s opposition would not only be a victory for Industry City’s developers but would set a precedent for the real estate industry being able to run roughshod over communities that object to its mega-development projects. Several prominent City Councilmembers, including Robert Cornegy and soon-to-be Congressman Ritchie Torres, are calling for exactly this.

The ramifications for Sunset Park residents are obvious. Sunset Park will be another gentrified neighborhood in a rapidly gentrifying city.

The fight against Industry City has implications beyond the neighborhood. It has implications for any of us who see the city as a site of civic engagement, as a place where community thrives. It’s community, the very idea of it, that’s destroyed, as the privatization of neighborhoods grows bolder and less restrained.

When neighborhoods become nothing more than potential sites of profit, our identities are stripped down, drifting further and further away from the notion of what it means to be part of a collective. In Industry City, and in all “cities” like it, we cease to be community members and instead become consumers. And that’s a future we should all fear.