The Indypendent
Menu
A Free Paper for Free People
Jabari Brisport and Marcela Mitaynes together at a recent protest. Photo: Twitter/@JabariBrisport

Tremaine Wright served on her neighborhood’s community board for more than a decade before being elected to the State Assembly in 2016. When State Senator Velmanette Montgomery, a 35-year incumbent, announced she would not seek re-election, she endorsed Wright to be her successor in Senate District 25 which stretches from Bedford-Stuyvesant to Red Hook.

Wright also gained the backing of her fellow Brooklyn elected officials, labor unions and Democratic Party clubs. Normally, Wright’s ascent to a potentially decades-long stint in the state Senate would have been more a coronation than a contest. But these aren’t normal times for New York City’s once-invincible Democratic Party machines.

On election night, Wright found herself trailing Jabari Brisport, a public school teacher and a democratic socialist who has never held public office, by 12 points. When mail-in votes were counted in mid-July, Brisport’s lead grew to 18 points and he declared victory as New York’s first out-LGBTQ Black state senator.

Brisport’s demolition of a machine-backed candidate was duplicated across the city. Incumbents Félix Ortiz (Sunset Park), Walter Mosley (Fort Greene) and Aravella Simotas (Astoria) were all ousted from the state Assembly by first-time candidates backed by the Democratic Socialist of America.

“Let today’s results be a lesson to incumbents all across the city,” tweeted Aaron Taube of the Queens DSA Electoral Working Group. “Live every day like you’re being primaried by a charismatic socialist with a national grassroots fundraising base and a volunteer operation the likes of which you can’t even imagine.”

Other progressive groups got in on the fun too. 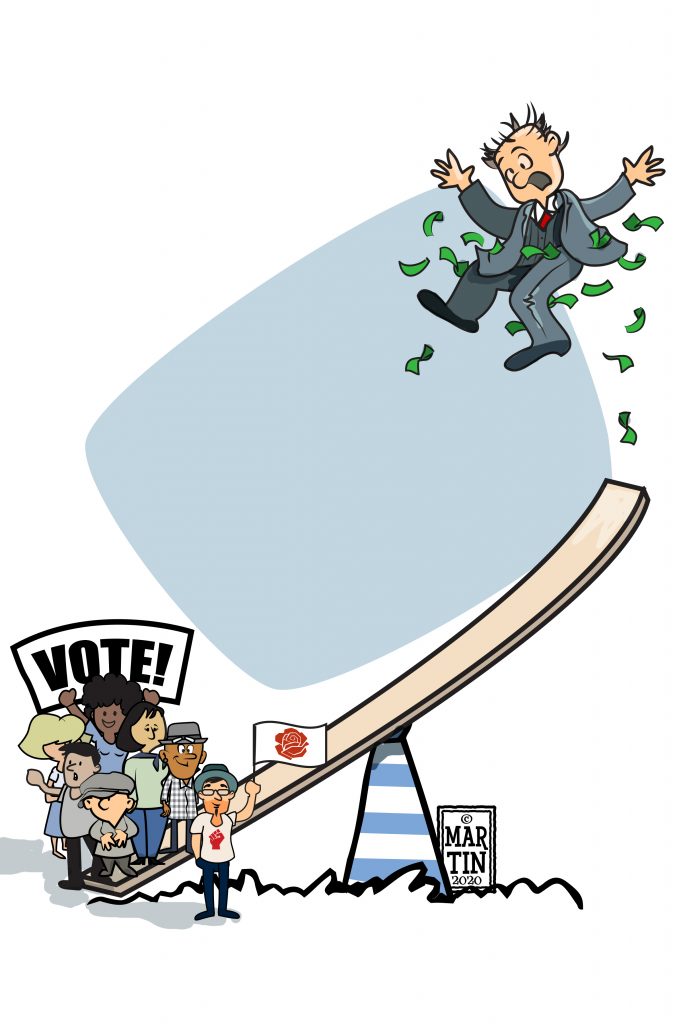 *The Working Families Party played a major role in the Bowman race. WFP also backed Jessica González-Rojas in her victory over a pale male incumbent whose sell-by date for repping an increasingly diverse district in Western Queens had passed. It also got behind Khaleel Anderson, a 24-year-old community activist who won an open assembly seat in Southeastern Queens over the machine’s preferred candidate.

*Emily Gallagher edged out 24-term incumbent Joseph Lentol to win a North Brooklyn assembly seat. Gallagher was backed by NY Communities for Change and the New Kings Democrats, an Obama-era reform group that has wrangled with the Brooklyn Democratic machine over the past decade.

Why is this happening now?

It begins with the ideological divide between older and younger Democrats that emerged in Bernie Sanders’ 2016 presidential run. Two years later, Alexandria Ocasio-Cortez shattered the myth that challenging an incumbent was a fool’s errand in her historic congressional primary victory against Joe Crowley.

Turns out the machine is a hollow shell, a monopoly whose product appeals to relatively few people but thrived because it could smother any competition with big donor money, endorsements and arcane ballot access rules. Since a real opposition finally got organized, the machine has been overwhelmed. Brisport told The Indypendent he had 1,000 volunteers participate in his campaign. According to Brisport, his campaign made 350,000 phone calls. He also set a record for most donors in a state legislative race with 7,500 who donated a total of $280,000. The other DSA candidates mobilized similar grassroots efforts on their behalf.

On the larger scale of statewide races, the standard way of doing politics remains effective, for now. An incumbent who leverages their office to raise millions of dollars from favor seekers can use that money to carpet bomb the airwaves with campaign commercials. A volunteer-based grassroots campaign is hard-pressed to keep up in a place as big as New York. This is how Gov. Andrew Cuomo could win his 2018 primary against Cynthia Nixon by more than 30 points while progressive insurgents were able to flip seven State Senate seats and move the legislature to the left.

Here in the City, the floodgates will pour open in next year’s municipal elections with all citywide offices plus 35 out of 51 Council seats open. Ditto for state and congressional primaries in 2022.

Like the moa, the giant flightless bird who dwelled undisturbed in New Zealand for millennia before humans landed on the island, a whole generation of mediocre machine politicians could disappear in a relative blink of the eye. They won’t be missed. Climbing the ladder for its own sake left them too compromised to fight effectively for their working-class constituents or even their own political survival.

Their replacements have vowed to be fierce grassroots organizers inside and outside the halls of power fighting for the many not the few. It can’t happen a moment too soon.