The Indypendent
Menu
A Free Paper for Free People
The August 4th blast was heard as far away as Cyprus, about 200km across the Mediterranean Sea.Photo: Assafir Online/Flickr.

The picture on the TV screen fizzles out with the last gasp of electricity, as you hear it cut on the entire street. A welcome quiet, albeit an imposed one — another minute and you probably would’ve thrown something at the TV. You opt for a walk through the city, past the eternal construction sites, the empty vegetable stands and the crackling glass shards of a bank’s broken windows. The last round of protests achieved little, and the armed guards still stand outside the capitol building, staring vacantly at the senile politicians stepping out of limousines into another session of closed-door crisis planning.

Then, past the detritus of late capitalism’s wasteland, you see the rows of tents. The hands of a caring busybody packing used cardboard boxes with food and bandages. The open-air meetings crowded around tables in front of laptops and maps, while volunteers are greeted and assigned tasks, joining a well organized and collectively run machine.

This is Beirut — where just over a month ago a hangar containing fireworks and more than 2,700 tons of ammonium nitrate exploded in a fireball, taking more than 200 lives and shattering everything within a two-mile radius. The shock wave ripped through windows and tore down walls with a violent crash and total disregard, from the working-class factory workers’ district of Qarantina to the up-scale hipster neighborhood of Mar Mikhael.

No one was surprised at the revelation that it was the blithe ineptitude of the system that had allowed a literal powder keg to lie for years in a limbo. No one was surprised when poor refugee workers at the Port of Beirut were blamed for starting the fire, haphazardly sparked by a metal welder sent to do a job without the slightest regard for workplace safety. What did surprise many, however, was how people came together to respond in the absence of any kind of official response.

A day after the explosion, residents streamed in from all across Beirut — those who weren’t injured brought what they could to those who needed it. They set up a triage center, with tarps for shade, tables to start organizing the supplies that needed to go out and the growing pile of canvassing forms to track where they needed to go. They didn’t ask for permission.

Weeks later, Beirut’s Base Camp is still installed as an open air headquarters of several groups of volunteers working to get people free services that the Lebanese government is failing to provide.

“We all met each other during the revolution that started October 17 of last year,” says Samer al-Khoury, one of the founders of the Base Camp, and a member of the activist collective Minteshreen (Arabic for the spread). “We try to help people in terms of whatever they may need that we can give them, whether it be physical, medical, or humanity.”

Base Camp’s presence echoes Zuccotti Park, Tahrir Square, and the ethos of the encampments that dotted public squares around the world in 2011, or the community-led disaster relief that New York saw in the wake of Hurricane Sandy in 2012.

Some of the volunteers are activists and community members; others have (or had) full-time jobs. Dividing into teams, some head out to survey needs in the neighborhood or sort glass and debris for what can be recycled, while their counterparts at Base Camp crunch the data into spreadsheets and work the phones for emotional support.

It all gets done remarkably fast, especially considering that most government offices in Lebanon still conduct business with paper records. Not that they couldn’t find a more efficient way; dysfunction and corruption is a hallmark of the Lebanese government. Base Camp is open about its critique of the system in choosing to operate outside of it, modeling the type of transparency that they want to see their community run with.

In Lebanon, “community” is a loaded concept. With the country’s politics of identity fully institutionalized, Lebanese often complain that the system sees them not as citizens, but rather as members of a sect — each controlled by a deeply-entrenched establishment of religious oligarchs and monied elites. As much as they have taken to the streets to push for reform and even revolution, the corrupt establishment parties have found a way to remain in power.

Nowhere is the gap between a people’s potential and their reality more clear than in Lebanon’s capital. A city of opulence and rot, Beirut was already reeling from economic cataclysm long before the explosion hit. Lavish and vacant condominiums crowd a downtown that has been gutted by vulture developers who prefer to leave them empty, waiting for new investors that don’t appear to be coming. In late 2019, recession took a turn to something worse. Families saw their entire savings evaporate under searing inflation. The nightly news re-played stories of public suicides of those who’d lost hope, parents who turned to stealing to feed their families, and armed robbers who sobbed as they begged for their victims’ forgiveness. 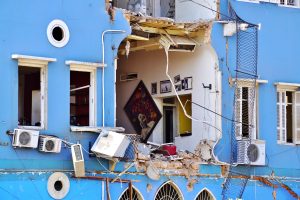 The political class remained apathetic and unrepentant. While the poor lined up at banks to withdraw an allowance that is barely enough to cover basics, the rich whisked their money and assets out of the country before they became worthless. Protests sounded the alarm about what everyone knew was happening, but when the leadership shuffled a few faces, little changed.

It’s commonly accepted that the system is rotten to the core, but nobody knows what to do about it, or what kind of replacement could win popular support from all of Lebanon’s sects. Since the explosion in early August, little has changed, and hope is fading that even a catastrophe of its size will have the power to change the establishment. But things are now back to the same unbearable “normal” — there have been two more fires at the port, and another major construction project downtown burned down, as no one who employs workers seems to have learned the necessity of safety standards.

Predictably, animosities have once again begun to fester between neighbors, as the political establishment played to familiar and base tendencies to sow divisions between people.

The kind of polarization that this Middle Eastern nation of nearly 7 million people has become accustomed to shouldn’t sound foreign to Americans today. Nor should they think that their government institutions are impervious to a self-interested cadre — hostile to democracy and openly sowing division — that might usurp power to serve its own corrupt interests.

It’s precisely this political future that Base Camp is rebelling against. By rejecting the hand they’ve been dealt, Beirut’s youth seek to carve out new possibilities beyond the traditional lines that politics have been drawn along since French colonizers first established the sectarian political system in the 1920s to make Lebanon easier to divide and rule.

For now, their grassroots efforts have earned a measure of legitimacy that the state’s “officials” have lost — tipping the balance to become the preferred point of distribution for aid that is coming into Beirut from international NGOs and foreign dignitaries who visit Lebanon on their way to meetings with government officials.

Coordinators say that state officials have stopped by — not to offer any concrete support, but usually to ask for data on who they’ve been helping — a request that has been flatly denied. They don’t have any misconceptions that politics is a game of vultures, looking to steal their shine if they can — but they consider it a success that they’re showing up the competition by demonstrating what can be done with people power. Base Camp welcomes aid from anywhere it may come from, and works to make sure it goes to where it’s needed in a transparent way.

The blast brought residents of Beirut a brief moment of togetherness, and while ever small, there is hope that community will be the remedy to help make it though. After all the city has endured, if they can do it, it’s an example to all of us.