“If we’re going to make a difference in this election, we have to get involved in other states,” says Suzanne Bohnker of Brooklyn.

Since early 2019, Bohnker has been volunteering with Water for Grassroots (W4G), a group formed in 2017 to connect activists in New York, where there is little they could do to affect the results of a presidential election, with grassroots organizations in swing states. Its strategy, explains cofounder Peter Hogness, is to create a way to help defeat Donald Trump “without giving the Biden campaign a blank check,” and to do that by collaborating with “people doing long-term issue work locally,” in order to avoid the political energy that goes into a campaign dissipating after the votes are cast.

This year, W4G is supplying volunteers for phone-banking and other ways of contacting voters to organizations in four states: Pennsylvania Stands Up and Make the Road Action in Pennsylvania; New Florida Majority; LUCHA in Arizona; and Durham for All in Durham, N.C. It’s also working with Reclaim Our Vote, a nonpartisan group that is helping people ensure they’re registered to vote in “key voter suppression states” such as Florida, Georgia, North Carolina and Texas.

Hogness expects that the number of people doing “substantial volunteering” will surpass the 150 the group had in 2018. The organizations it works with generally do a mix of endorsing progressive candidates and helping people vote.

Pennsylvania Stands Up emerged after Trump’s election in 2016, when people held emergency town-hall meetings in every county of the state, says deputy organizing director Julia Berkman-Hill of Lancaster. It now has eight chapters working in 11 counties, including Philadelphia, the Lehigh Valley, Reading, and Harrisburg as well as Lancaster. This year, its Reclaim Philadelphia affiliate backed two democratic socialists who upset incumbent Democratic state legislators in the June primary: Nikil Saval for the Senate and Rick Krajewski for the House.

“In order to have power, we need to get officials elected; in order to build our movement, we need to run campaigns,” says Berkman-Hill.

The more than 30 legislative candidates the group has endorsed also includes more centrist Democrats. Flipping the nine House and four Senate seats needed to break the Republicans’ legislative majority, she says, would clear the way to expand Medicaid, increase housing funding, and raise Pennsylvania’s minimum wage from $7.25 an hour, the lowest in the urban Northeast. 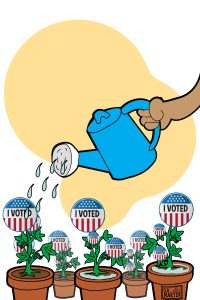 urham for All, founded in 2016, has a similar outlook. “After years of doing issue-based work, we need a strategy to get people in power,” says lead organizer Bennett Carpenter. “We can’t win better conditions without changing who’s in power.”

The group helped elect a “pretty solid progressive majority” to the City Council, he adds, but has been frustrated by the hardline rightwing majority of the state legislature, which has prevented the city of 280,000 from enacting rent controls or setting a minimum wage above $7.25.

The COVID-19 epidemic has drastically changed campaigning, says Water for Grassroots volunteer Rory Bernstein of Brooklyn, because you can’t go door-to-door, but “every-body’s extremely motivated because of the dire situation.”

Volunteers have also helped with “deep canvassing,” which is more about talking to people about what issues are important to them and what might motivate them to vote. “It’s a different way to reach voters from the traditional ‘Hi, I’m representing Candidate X,’” says Bohnker, who did deep-canvassing calls to people in North Carolina who didn’t vote in 2016. “Deep canvassing creates longer, more personal conversations to really connect with voters, making sure to listen as much or more than we talk,” says Hogness. “Longer calls, asking about their experiences and sharing some of our own, can often have a deeper effect, especially in talking with voters who’ve been abandoned by the political system.”

Maisie McAdoo of Brooklyn, a retired communications specialist for the United Federation of Teachers, is one of 150 Water for Grassroots volunteers working with Reclaim Our Vote to send postcards to voters asking them if they’re sure they’re registered or need help getting absentee ballots or voting early. In Georgia, Gov. Brian Kemp purged more than 300,000 voters from the rolls last year.

As the election nears, however, the group will switch to phone-banking. Rory Bernstein has been calling volunteers to get them to sign up for shifts, usually 90 minutes to two hours. Make the Road Action, the electoral arm of the Brooklyn-based Make the Road organization, plans to make more than 1.4 million calls to encourage voters, followed by 500,000 texts and 500,000 get-out-the-vote calls, says political director Ivan Garcia.

“You get a lot of hangups and a lot of screw-yous when you cold-call, but it was surprising how many people want to talk,” says McAdoo. She advises showing you’re willing to listen— “a little humility helps, and bluster doesn’t.”

Calling from out of state doesn’t appear to be a problem. “I had to wrestle a bit with the carpetbagger problem,” says McAdoo, but no one she’s called has ever said anything about it.

“The issues are the same,” says Bernstein.

Durham for All was a bit wary about working with out-of-staters at first, says Carpenter, but it takes training really seriously, he adds, and issues such as gentrification are common concerns across lines of race, class, and geography. Durham, once a working-class city of tobacco and textile mills with a substantial Black middle class, is now gentrifying rapidly as the Raleigh-Durham-Chapel Hill Research Triangle region be-comes a hub for the tech industry.

This involvement in electoral politics represents a significant change for the U.S. left, which for decades before Sen. Bernie Sanders’ 2016 presidential race largely rejected it in favor of direct action, with the biggest exception Rev. Jesse Jackson’s campaigns for the Democratic nomination of 1984 and 1988. The lesson they are drawing is that while the Civil Rights Act of 1964 never would have happened without the movement’s direct-action protests, it also never would have passed without support in Congress and the political skills of President Lyndon Johnson.

“I have not in the past been a big elections person, but this seemed like the essential thing to do,” says McAdoo. She was active in the 1960s antiwar movement, but believes her generation failed to produce lasting organizations. Jose LaLuz, a longtime labor-union activist who was a surrogate for Sanders’ presidential campaign earlier this year, argues that the energy of the massive and multiracial movement against police violence “has to be translated into political engagement.”

Elections are a tactic that can “build power from the ground up,” he says. It’s not only a matter of electing activists to office, but also “to raise these issues at a time when people’s interest is much higher.”

He praises Water for Grassroots for doing an “excellent job” of reaching infrequent voters, often Latino and working class, that campaigns “have left on the table.”

Unlike the Democrats’ centrist wing, which is concentrating on trying to persuade “swing voters” to choose Joseph Biden over Trump, these groups are focusing more on persuading in-frequent voters to choose voting against Trump over staying home. Durham for All’s “Swing the State” campaign is making calls to 17,000 city residents, mostly poor and Black, who did not vote in 2016, says Carpenter.

“The only good thing that came out of Trump winning is that people are more aware of who they’re voting for,” says Garcia. “If you come out here and put in the work and put out a message that resonates with people, you’re going to win.”