At the beginning of May, Gov. Andrew Cuomo announced a plan to “revolutionize” education. The Bill and Melinda Gates Foundation, he said, would mastermind it, assembling a task force of experts to create a blueprint for a new kind of learning, one that would last beyond the pandemic and the chaotic first weeks of online education.

“It’s about time,” Cuomo said at a press conference.

“Why,” he asked, “with all the technology you have?”

The backlash was swift.

The city’s schools had their online reopening on Sept. 21, and some in-person classes began Sept. 21, with more slated to reopen for partial in-person learning on Sept. 29 and Oct. 1, barring strikes or more delays. Since May, little has been made public about the progress of the Gates initiative in New York.

But the whole affair, for many, was emblematic of an education system ever more beholden to Silicon Valley and the education technology industry. Advocates have long argued that high-tech reformist initiatives like Gates’ brainchild, the Common Core, served corporate interests more than those of students. They have warned, too, that the growth of the for-profit education and testing sector has made way for exploitative student data practices, despite relatively strong federal privacy legislation for youth. Now that learning is necessarily online, the trend has only accelerated. 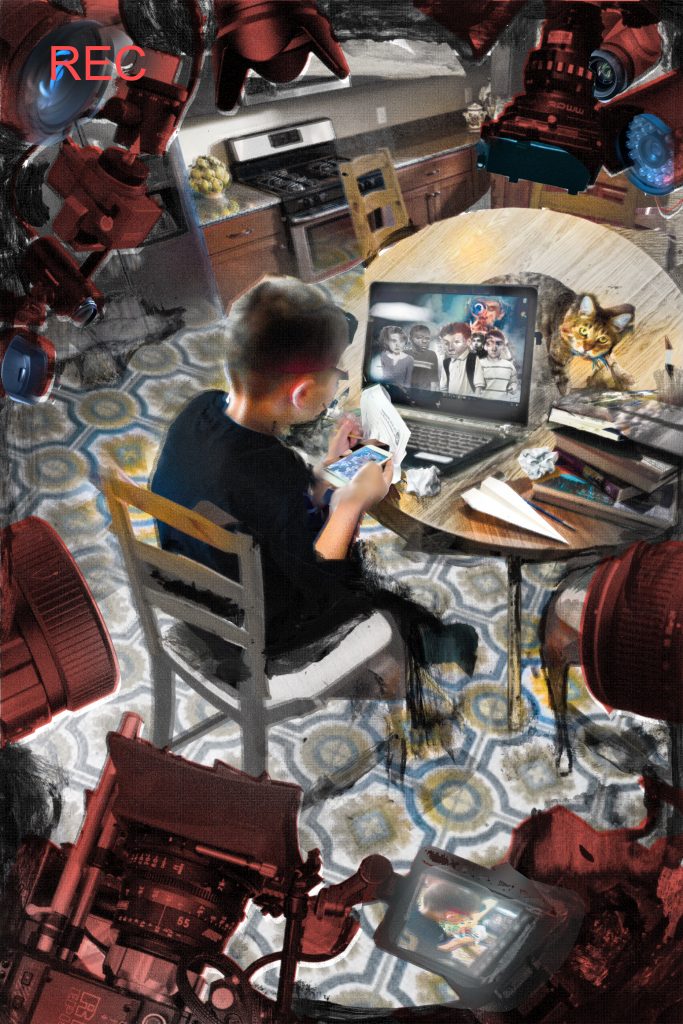 As students return to school, some New York parents and advocates are calling for additional oversight of these technology-saturated classrooms. “Distance learning was kind of a disaster for us,” Carrie McLaren, a Brooklyn mother of a 12-year-old son, tells The Indypendent. Suddenly, she said, his education was filtered through the internet and You-Tube — and “YouTube would love for your child to stay on YouTube all day long.” Educational videos as-signed by teachers quickly led her son down “rabbit holes,” the inevitable result of a platform primed for engagement rather than education. It makes sense, she says: These resources are easily accessible and schools “were just totally overwhelmed by distance learning.”

WiFi networks in schools often block sites that are overly distracting, house explicit content, or oth-erwise pose a risk to students. Now, limiting what children look at as they learn online falls on parents. Federal law prohibits the personal data collection of users under 13, but privacy is still a concern — as is predatory advertising.

“My son’s education and well-being are irrelevant to Google,” Mclaren says. “Google’s business model is to grab and hold the attention of users, and to creatively profi t from their data.” The online behemoth has repeatedly faced charges of student data misuse, though it claims its products are privacy protective. The details of its contracts with New York City schools, though, are mostly not public.

Like districts around the country, New York City struggled to balance the messy transition to distance learning with the potential ramifications of using tech platforms for education. In April, the DOE banned Zoom, citing security concerns with the platform, like so-called “Zoom-bombing,” but has since reversed that ban. City officials say they have worked with Zoom on a new, “tailored” platform, but the details of the city’s contract with the company, like its relationship with Google, remain murky.

In 2014, New York State adopted several strong, and hard-won, privacy requirements for vendors that handle student data. Among other things, the law requires that contractors not sell students’ personal data, and that a “parents’ bill of rights” be included in all contracts, which outlines strict guidelines for third-party use of student data. New state regulations, passed in January, mandated that some contract in-formation for these vendors be made public. New York City is still catching up.

“A lot of school districts are not prepared to comply with the privacy requirements of the law, which require trans parency and no use of data for commercial purposes or marketing,” says Leonie Haimson, executive director of the local nonprofit Class Size Matters and longtime student privacy advocate. “I don’t think anybody’s really making sure that is happening.”

Of several contracts that Haimson provided to The Indy, obtained via public records requests and dating from 2014 to 2016, none included the full list of requisite privacy stipulations from the 2014 state law. The Department of Education has also not made public a complete accounting of contracts that implicate student data, as is required by the January law — though the city has until Oct. 1 to do so.

The city says its more recent contracts are compliant with state law. “And our contract renewals also have appropriate, compliant terms,” a spokesperson wrote to The Indy. “Many of our ongoing agreements include these terms, and we are phasing out or swiftly updating contracts that do not have the proper protections.”Noncompliance is a trend Amelia Vance of the Future of Privacy Forum has observed nationwide. “Very few educators have actually been trained in any-thing regarding student privacy,” she explains to The Indy. “So [in the spring] you ended up with a lot of educators and administrators who were adopting programs that didn’t meet privacy standards.”At the same time, the New York City and school districts across the country have spent hundreds of millions of dollars on tech for students.

Fundamentally, this spending is critical to ensure equity: Online learning heightens underlying racial and class disparities, in part because of serious gaps in access to broadband and technology. Without universal access to learning soft-ware and the internet, students cannot have universal access to education.

Yet city lawmakers have questioned the particulars of the expenses. In March, the city’s Department of Education opted to purchase iPads for students, a towering $270 million investment. That figure includes another $40.5 million to IBM, to install software in the iPads.

“This is such a waste of money,” City Councilman Ben Kallos told the in April. “For what they spent on an iPad, they could have bought a full functioning laptop for every kid in the system. Instead, we got a bunch of iPads which don’t really create equity when families have laptops and broadband.”

Aixa Rodriguez, a high school teacher and the founder of the advocacy group Bronx Educators United for Justice, echoes Kallos’s concerns. “The iPads were the biggest fail,” she says. “I had so many kids struggle. Writing a research paper — iPads were not conducive to that. And they weren’t giving extra tech to these kids. They wouldn’t give an external keyboard. I need proper tech and that was not the proper tech at all.”

The iPads were a reminder that education technology is no panacea. It can also widen or reinforce inequities.

Vance worries that the growing popularity of online be-havior management platforms or other high-tech metrics to evaluate students’ participation or performance could lead to discrimination. Schools across the city, for example, use a plat-form called “ClassDojo” to evaluate and track students’ behavior — long controversial among privacy advocates. These systems have also been criticized for automating discriminatory classroom discipline, which, even without algorithms, al-ready targets Black children at higher rates.

“I worry that parents and students might be surprised on their fi rst report card, because some of the analytics don’t capture the information that administrators might think they do,” Vance says.

Haimson concurs. “One of the most dangerous forms of privatization is outsourcing instruction, assessment and behavior management to these private, for-profit companies.

“That was happening at a very fast pace even before the pandemic,” she says. Now, the trend has accelerated.

Click here to hear an interview with Katya Schwenk on WBAI Evening News hosted by The Indypendent.