Possibly the last thing David Graeber wrote for publication was an introduction he co-authored, with his longtime friend and intellectual comrade Andrej Grubacic, for Mutual Aid, the classic work on the history of human (and animal) cooperation by the 19th-century Russian anarchist Peter Kropotkin. Discussing the impact of Kropotkin’s book, which challenged the dog-eat-dog morality that capitalism had embraced through a misreading of Darwin’s theory of evolution, David and Andrej said the following: “Such interventions … reveal aspects of reality that had been largely invisible but, once revealed, seem so entirely obvious that they can never be unseen.”

Anyone who knew him will immediately recognize this as pure David, laying out his lifelong quest to uncover patterns and tendencies in human behavior that our rulers — the authorities, the state, organized religion, capitalists and the rest — work so hard to obscure. Uncovering these patterns, as Kropotkin did in his book, is not just fun and en-lightening — which appealed to David’s impish side — but a lifeline, offering us alternative paths in a world marked by fear, exploitation, poverty, war and mass murder and the destruction of any culture outside the marketplace. 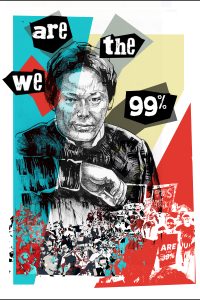 In our two decades of friendship and occasional collaboration, I never knew David happier than when he could begin a sentence, “Well, the funny thing is…,” always followed by a paradoxical observation about some institution, famous person or aspect of human history and development. He made learning and enlightenment genuinely stimulating, but he was also intensely serious about it, because for him, as for all the best thinkers, everything — the world, human life — depended on it.

David and I became friends in early 2000 as members of the New York City Direct Action Network, which brought together anarchists and anarcho-tolerant activists, initially around the mass protests that followed the 1999 shutdown of the World Trade Organization meeting in Seattle: the same setting that gave birth to The Indypendent. Like me, he had been politically active and an anarchist for years, but his literary debut as such came in 2004 with the publication of a “tiny little book” (as he called it), Fragments of an Anarchist Anthropology. Still my favorite of his writings, it identified an anarchist strain in anthropology going back to some of its earliest practitioners and laid out a series of projects for the anarchist movement that are just as exciting to consider today, including:

The book was a kind of manifesto, and the common denominator in all the above was the same as it would be throughout David’s life as scholar and activist: to make us see our world and ourselves differently, as hopeful, as unbounded. Some of these projects he tackled himself before his death, others are a challenge and an inspiration to the rest of us in the movement.

Arguably, David’s finest hour as an activist and author was the serendipitous publication of Debt: The First 5,000 Years just as public anger over the economic debacle of 2008 was coalescing into Occupy Wall Street and the wave of autonomous, directly democratic organizing around it. An early OWS organizer, David will always be associated with the slogan, “We are the 99%!” (although he did not claim sole credit for it). His real achievement was to make us see debt for what it really is: a system of domination that privileges those who are assumed to have “good credit” and disadvantage those who are assumed not to. Many people had some understanding of this after the 2008 crash, but David — in his book and through his work with OWS — helped crystallize it and make it a focal point for organizing.

David was always bombarding us with fresh ideas and perspectives, from the Rolling Jubilee Fund that buys and erases debt to the plague of “bullshit jobs” to the “secret joys of bureaucracy” to his delightful essay on “The People as Nurse-maids to the King” (read it and find out). Many of us remember the time Washington, D.C., police kettled hundreds of activists, including David, and he turned the tables by ordering dozens of pizzas to be delivered to the captive masses. (Like Emma Goldman, David came to the revolution to dance.) There was never a problem or a situation, as far as David was concerned, that couldn’t be tweaked to signify something other than what we’re told it sig-nifies, and probably something liberating. It could be in the form of written word or direct action, but either way, it bore the mark of his unique mind.

With David gone from us at 59, the tragedy is that there would have been so much more. We can still look forward to his last book, The Dawn of Everything: A New History of Humanity, which was written with David Wengrow and attacks the many false assumptions that reinforce inequality as an inevitable part of human development, which comes out next year. But he won’t be around to provide the playful turn of thought that he always brought to our theory and practice as activists. Personally, I’ll remember the many times we swapped ideas, frustrations and plans when we both lived in New York — often in front of a laptop on the floor of his apartment in the union-sponsored Penn South complex (David was a proud New Yorker, proud of his working-class roots) or in a small restaurant on West 32nd Street where David could satisfy his relentless craving for Korean food. I regret that we’ll never do it again.

What we still have is the books — his “children,” he called them — and the opportunity they give us to study his method, absorb his faith in self-organizing and mutual aid, and try to apply it ourselves. Here’s how I distill it: