Reports of President Trump’s offensive comments regarding American soldiers killed or captured during this country’s numerous military entanglements since the beginning of last century have predictably unleashed a firestorm. Both the reports and the ensuing criticism illustrate President Trump’s transformation into a liability and a source of embarrassment for the corporate elites and the military-industrial complex, whose interests the Trump administration’s policies otherwise serve.

Nothing deconstructs the ruling ideology more effectively than a billionaire ‘commander-in-chief’ who describes fallen American soldiers as ‘suckers’ and ‘losers.’

The state of almost perpetual war this country has been in for over a hundred years now has been integral to its rise into the dominant economic, political, and military power of the capitalist world.  Although the end of the Cold War generated hope in some quarters for a peace dividend once the ostensible rationale for exorbitant military spending had elapsed, this hope proved extremely short-lived.

Instead, military power has become one of the ways that the United States has sought to defend its preeminence against the economic and geopolitical challenges represented by the European Union and China. At the same time, both the growing urgency of ecological limits to economic expansion and the resource wars these limits will continue to trigger make the growth of military spending seem rational to the corporate elites and the military-industrial complex who usually frame and call the shots on the geopolitical questions that U.S. governments are called upon to confront.

This arrangement depends, however, on the availability of young men and women willing to risk their lives in wars that divert resources from the healthcare, education, and infrastructure spending that would do much more to serve the interests of ordinary Americans than military interventions in distant countries.  In this respect, a long-standing element in U.S military projection abroad has been the ideological justification of wars as necessary to defend ‘democracy’ and our freedoms. The hollowness of this ideology becomes evident, of course, in wars we launch against military dictators and oppressive political forces (such as in Iraq and Afghanistan) that we had previously supported in the name, as always, of democracy, freedom, and human rights.

In any case, essential to this ideology is the treatment of the young American men and women who pay a heavy price in the process, as heroes. And nothing deconstructs this ideology more effectively than a billionaire ‘commander-in-chief’ who callously describes fallen American soldiers as ‘suckers’ and ‘losers.’

That such a turn of events would be unwelcome for America’s corporate elites and the military-industrial complex is not surprising. After all, the weakening hold of this ideology had already become manifest during the Vietnam War, when rising anti-war resistance both within the army and among the civilian population first divided the economic and political elites in this country and then led them to accept the inevitable.

One lesson that these elites drew from this experience was the need to substitute today’s capital-intensive warfare for the soldier-intensive warfare of the Vietnam era, which at the time exacted a politically unacceptable toll on the lives of young Americans drafted to the military.

This shift also made it possible to rely on a voluntary army that required much fewer soldiers to enforce U.S. geopolitical objectives around the world.

Even this development, however, did not eliminate the difficulties that the U.S. military had recruiting enough young Americans willing to risk their lives in the name of defending our country in distant territories thousands of miles away from our shores.

Instead, a clear pattern developed of recruitment levels increasingly dependent not on surges of patriotic enthusiasm but on rising levels of unemployment. And although the current deep economic crisis may in the short term alleviate the pressures the military faces on this front, any further weakening of the ideology on which it depends does not bode well for its future.

President Trump has denied the latest reports on his antics but the fact that, as his political adversaries rightly point out, he is a pathological liar (as well as the fact that he has made similar public statements in the past) undermines the credibility of his vehement denials. The very plausibility of these reports illustrates Trump’s uncanny ability to reveal the growing cynicism of capitalist elites with a disarming honesty that more disciplined and less vulgar politicians (for instance, Biden) can do much to disguise.

Trump’s disarming honesty, in this respect, is not new. As the reader may recall, confronted during a presidential debate in 2016 with his record of evading taxes, Trump cavalierly attributed it to the fact that he was “smart.” Openly boasting about another widespread practice that illustrates the growing cynicism of contemporary capitalist elites was apparently not sufficient to sink a candidacy at a time when the country was neither reeling from a massive public health and economic crisis nor being wracked by a country-wide uprising against racial and economic injustice. 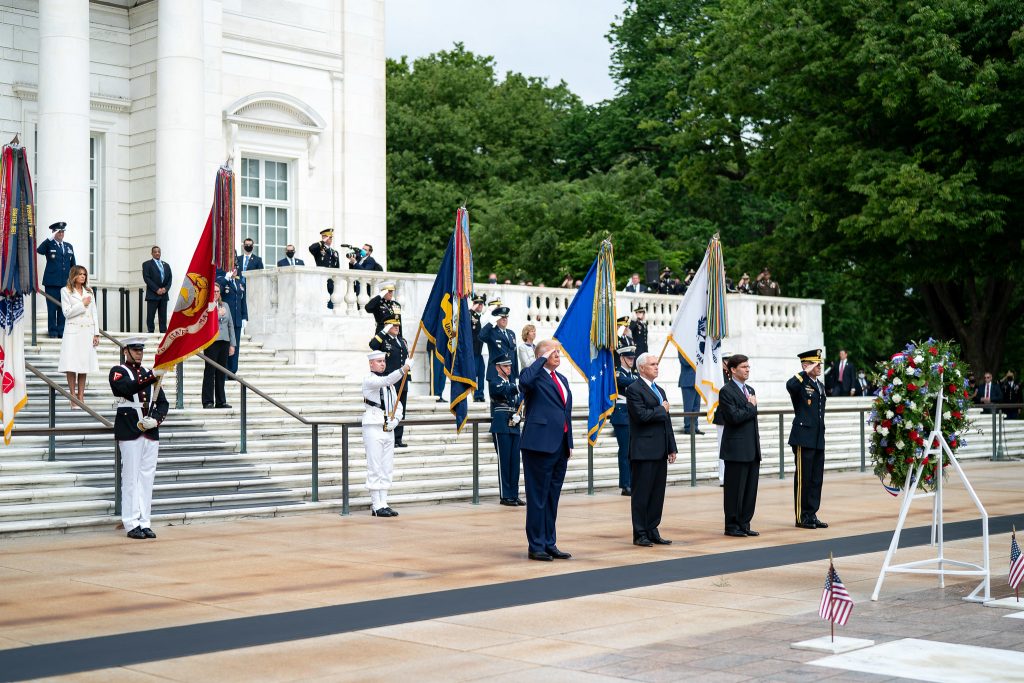 Trump and members of his cabinet salute the “suckers” who died in America’s military adventures abroad. Photo: Andrea Hanks/White House.

In the current conjuncture, by contrast, corporate elites may be better served by a more polished representative of their interests, especially one who can plausibly be portrayed as a paragon of ‘common decency’ and who has a compelling personal story that includes a now-deceased son who, unlike Trump and his children, actually did serve in the military.

By bolstering the ‘lesser evil’ philosophy that has kept many progressive Americans in the grip of centrist Democratic elites averse to challenging the long-standing structural injustices plaguing American society, Trump’s presidency may have inadvertently paved the road for an unprecedented political development, a Biden presidential campaign that actually ends in victory.

It is sometimes thought that a Biden presidency would signal a return to the Obama era. The problem with such a return, of course, is that it was precisely the failure of the Obama administration to break with the neoliberal paradigm that allowed Trump’s faux populism to prevail in the 2016 election.  It is, therefore, tempting to conjecture, instead, that part of the appeal of Biden is not so much popular support for Obama’s policies but rather a nostalgia for a bygone era when it was still possible for many to pretend that capitalism is not the ugly monster that President Trump’s words and deeds are daily revealing it to be.

It is here that, from the point of view of capitalist elites, Trump’s ultimate sin may lie, and it is this sin that may help bring him down come November.

Costas Panayotakis is Professor of Sociology at New York City College of Technology (CUNY). He is the author of Remaking Scarcity: From Capitalist Inefficiency to Economic Democracy (Pluto Press) and of the forthcoming The Capitalist Mode of Destruction (Manchester University Press).