The Indypendent
Menu
A Free Paper for Free People
Illustration by M Gage.

People lie. People cheat. People steal. Some get punished. Some wind up taking the punishment for someone else. That’s the way of this wicked world.

But a wise man once said that the prevailing ideology of a society reflects the ideology of its ruling class. So when the president blatantly lies, cheats, steals and twiddles his lips as others suffer, it follows that people will lose confidence in truth, honesty, property and the rule of law.

It’s a bitter lesson, and the capitalist class is only starting to get it. We face the distinct possibility of a presidential election where the popular vote will be irrelevant, as it was in 2016. We can’t even be sure that the Electoral College will be relevant, if Trump makes a hash of the voting process and the other powers-that-be play possum, as they have on other occasions.

This is the agony of the pre-election months of 2020. The whole world is living through it, because if the Republicans continue to see the pandemic as a casino chip, the cost in lives worldwide will be incalculable. And yet it looks like they will continue this way. The Democratic Party is running against the lurking threat to social peace that would hurt the functioning of a society based on private commerce. Trump is promoting race war and even running on it. 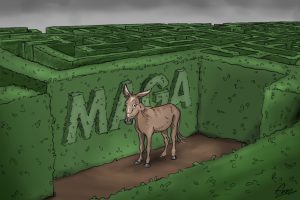 We can almost taste the confusion at the top of the Democratic Party. This is not how the game is played. Elections come from democracy, and if democracy is dismantled, there will be no more parties in the usual sense. Yet if Trump is beaten, the Democrats will still be faced with a situation they aren’t prepared for. More crises at once than even Franklin D. Roosevelt had to handle. Not a strong incentive to take over. But them losing would unleash hell.

Are we doomed to just stand back and watch this wretched clusterfuck? The alternative to inferno is not centrist Democratic confusion and anxiety. It’s the possibility of making the left into an organized national opposition with direct ties to millions of people after Election Day. This is what we have to aim for, as hard as it is to say with a straight face. We know the centrists are afraid of that happening at least as much as they are of four (or more) years of Trump.

There is only one option for the left before the big showdown: Close ranks with the centrists and work harder than them to oust Trump, and hopefully flip the Senate. Anything else is praying for rain. This can open the possibility to avert greater disaster and change the left from a sideshow to a political force. The left’s victories in Democratic primaries for Congress and state and local offices across the country shows this can be done, and electoral work and mass protest show how it’s done. If we continue to push the Green New Deal and Medicare for All, both will be achievable despite the threat of fascism — but only if the GOP is defeated.

We have the capacity to make the move. Remote phone-banking means that wherever we are, we can work for any campaign in the U.S. We should piggyback outreach for anti-Trump votes with the campaigns of left Congressional candidates like the Squad (all up for re-election), Cori Bush in Missouri, Jamaal Bowman in New York, and Marie Newman in Illinois. Working through individual campaigns’ phone banking efforts, they get voter information directly, independent of the party leaders.

Hopefully, protest will not be driven off the streets by the already proven threat of violence. There is so much to scream about, and so many ears to reach. The whole left can agree on that old Wobbly slogan, “Agitate, Educate, Organize!” Better we should have the way free to do it in public. But we can’t count on that if the Republicans win, so it’s time to start thinking of ways to do it when protest is prevented by law or by social repression.

Another old left idea is the united front. The concept is easier to grasp than to realize in a movement as fragmented and politically incoherent as the U.S. left. There are simplistic alternatives: Any two people can form a “vanguard party,” and any smashed soul can retreat from the struggle and light a match, wave a gun, or punch a cop. But unity is imperative, whether people want to push a progressive alternative or see that the threat to democracy requires a unified defense.

United fronts were what laid the basis for the defeat of fascism in World War II, a number of successful revolutions after the war, and the rise of industrial unionism here in the U.S. The unity in action of progressive forces is what makes the possibility of social transformation realistic for the burned-out and the damned. We should keep this in mind, even when forced to retreat, even when factional fights leave us raw, or we forget where we are and where we can be in the din of collapse.

We can make laws and elections work for us, sometimes. We can get the upper hand in street confrontations, sometimes. But in every case it depends on numbers and unity, not money or arms. That needs to be the focus of our strategy, short-term and long-term.