The Indypendent
Menu
A Free Paper for Free People
Amid a public health crisis, tenant activists call for rent cancellation. Photo: Housing Justice For All / @housing4allNY

While most New Yorkers have been locked in their neighborhoods during the pandemic, the privileged ones left for the Hamptons and exotic estates around the world. Manhattan office and retail spaces shuttered, the restaurant and hospitality industries crumbled, and recently settled gentrifiers went back to where they came from. The city’s powerful real estate industry is coping with declining property values and rents and everyone is wondering who and what will survive the pandemic.

This new reality is leading many to question whether we are facing a new period of capital flight and fiscal austerity that will make demands for deep change more difficult to achieve, as in the fiscal crisis of the 1970s. Or whether we are facing new opportunities for liberation from the clutches of finance and real estate. I think both obstacles and opportunities are real and worth understanding

Even if capital flight and austerity continue, New York City will likely remain a major node for global capitalism. Big real estate, investment capital and wealthy New Yorkers survived the fiscal crisis of the 1970s and are likely to survive this one. They are coveting their half-vacant towers, dazzling finger buildings and historic brownstones. They will hold on until the market turns up again.

Already we are hearing many economists repeat their eternal credo that only new market-rate development can bring people back and save the city. They may accept billionaire Michael Bloomberg’s declaration that the mega-luxury Hudson Yards is the “last great neighborhood in Manhattan,” but they still look greedily at the privatization of Manhattan’s public housing and conversion of the remaining small manufacturers and retailers into upscale boutiques.

In the main, however, big real estate shifted its strategic focus decades ago toward investments in the inner suburbs and outer boroughs, particularly the Brooklyn and Queens waterfronts, the South Bronx, Central Brooklyn and Northwest Queens, in areas that 40 years ago were victims of the city’s budget cutting and “planned shrinkage.” 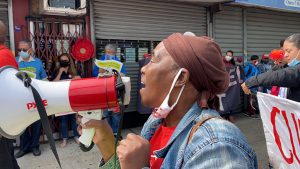 Urban real estate still serves as an outlet for excess capital in both good and bad times (Rockefeller Center was built during the Great Depression). Today’s pile of excess capital may shrink a bit but the biggest hit will be felt by labor, pension funds and household savings. When capital faces its next great cyclical downturn, the city’s upscale enclaves will be expanded, while our neighborhoods will again face austerity.

In the last fiscal crisis, labor and community advocates and veterans of the civil rights movement fought back against service cuts. Today we face the impending crises with new and old social movements. Over the last several years community and housing activists scored big victories over the ravenous real estate industry. Tenant groups moved forward on rent regulation and communities of color beat back Mayor Bill De Blasio’s rezoning plans that would have promoted new development and displaced renters and homeowners. These fights have led some candidates and elected officials to pledge they will take no money from real estate. Plans for new megaprojects, like Sunnyside Yards in Queens, are facing early opposition, building on the defeat of Amazon’s plan for new development in Long Island City. As we struggle to get back to work and school and fight evictions, promises of more luxury condos plus a few “affordable” housing units will ring hollow.

While it will be a relief to get the growth machine off our backs, our community-based and labor movements face the challenge of building a serious set of alternatives. The seeds for these strategies are already planted in our neighborhoods and the question facing us is how they can grow.

During De Blasio’s two terms, a new generation of progressives won seats on the City Council. More people of color occupy important positions in government. However, attempts at deep reforms have been monumentally frustrated. Some of this can be attributed to the power of the Democratic Party machinery, lobbyists and the sheer weight and complexity of the city’s bureaucracy.

Going forward, we must be careful that we don’t just back a progressive-sounding mayor (we’ve been there before) but support more independent candidates who are not tainted by wealthy donors and the machine. They should have roots in our diverse social movements and neighborhoods and bring new energy and ideas to government. However, good people and good government are not enough. We need big, transformative proposals that are rooted in our historic social, community and antiracist struggles. As an urbanist from Brooklyn who has worked most of my career inside and outside government, I offer a few big ideas in this small space:

• Governance— Activists and experts with roots in our communities need to fully understand and transform all of city government’s agency silos, one by one, so they respond to the needs of neighborhoods and not lobbyists.

• Planning— Provide real alternatives to the rule of real estate. New York City has never had a comprehensive plan that charts long-term strategies for infrastructure and services. Support real community, citywide and regional planning and put zoning in its place.

• Policing— Follow the calls of the decarceration and Black Lives Matter movements to reorganize the approach to public safety.

• Housing— Preserve NYCHA (public housing), subsidize permanent housing for the unhoused and don’t subsidize “affordable housing” that is not affordable to most working people. Expand the use of community land trusts to preserve public investments in housing and public space

• Public Health — Fully fund the fight against the epidemics of obesity and asthma that disproportionately affect communities of color.

• Education— End the inequalities in school spending and access.

• Community Boards—Members of the city’s 59 community boards are appointed by Borough Presidents and City Council members. The boards should be elected, have adequate professional staff, and be empowered to develop long-range plans.

The typical “expert” on government will dismiss all of this saying it costs too much and we’re facing fiscal austerity. When it comes to transformative changes both large and small, however, the key elements are political leadership, government restructuring and reforming agency policies.

The other day on my walk in a city park I saw the usual overfl owing garbage cans guarded by useless cops sitting in their air-conditioned car busily texting. Imagine if city employees were reorganized as stewards of the land and public welfare!

Tom Angotti is author of New York For Sale: Community Planning Confronts Global Real Estate and co-editor of Zoned Out: Race, Displacement and City Planning in New York City. He is Professor Emeritus of Urban Policy & Planning at Hunter College and the Graduate Center, CUNY.