The Indypendent
Menu
A Free Paper for Free People
A health care worker rally in front of Kingsbrook Jewish Medical Cetner, covered by Rosie for her story on the hospital's planned closure.Photo: Sue Brisk

At the end of the workday, Aneela Nasim peeled off her jumpsuit, changed her shoes and got in her car. Sometimes she sat and cried. Sometimes she had to just sit for a while and process the day in her head, moment by moment, before she was able to move.

When she got home, Nasim came in by the back door and went straight down to the basement. She slept apart from her 10-year-old child for months during the surge of COVID-19 cases last spring.

Nasim has been a nurse at Kingsbrook Jewish Medical Center in Brooklyn’s East Flatbush neighborhood for almost five years. It was her first job. During the height of the epidemic, she would walk past the cold storage trucks outside, where dead bodies were kept. Hospital storerooms and offices were converted to patient rooms, and nurses had to move from one patient to another, responding to the constant sound of codes — signifying a medical emergency, like cardiac or respiratory arrest — going off down the hall.

“We had code after code, like flies,” Nasim recalls. “You would come out of the room, and the next minute you go back in and the patient is gasping for air.”

Patients who passed away during the time when no outside visitors were allowed were comforted by health-care workers in their final moments.

Nasim recalls staying with one patient until he died. He had been in the hospital for about three weeks. On his last day, he asked for a cup of tea with garlic — his wife had told him this would help. Though he was alert, he declined quickly, Nasim remembers, and he died soon after being intubated.

“I’m so glad I was wearing a shield on my face,” she says. “I just had tears rolling down my eyes. I could never forget his face.”

In April, after five Kingsbrook staff members died of the coronavirus, hospital workers rallied outside the hospital for personal protective equipment, saying that insufficient protective gear had contributed to the deaths. Concerns over PPE are no longer front and center. Kingsbrook faces a new challenge.

It could soon cease to exist as a functioning hospital.

Kingsbrook is slated to slowly expire over the final two months of the year.

Already, five coma recovery beds, 20 traumatic-brain-injury beds and 41 medical/surgical beds have closed. By Dec. 31, the rest of the 163 medical/surgical, 10 intensive-care-unit and 10 coronary-care-unit beds will be gone for good — even as the city faces a possible second wave of COVID-19 infections this winter. The Kingsbrook facility will continue as a collection of ambulatory and outpatient-care clinics.

The New York State Nurses Association and 1199SEIU, which represent the health-care workers at Kingsbrook, have received guarantees that their members will be reassigned to jobs at other hospitals if they are unable to remain at Kingsbrook. Still, many of the workers are concerned that closing the hospital will deprive the community of care, especially with a resurgence of the pandemic threatening.

“By closing this hospital before the second wave of the pandemic, which has the possibility of being worse than the first, [Gov. Andrew] Cuomo is working to ensure that even more Black Brooklynites will die,” says a petition signed by 300 Kingsbrook health-care workers and 80 from other institutions.

Jo Ann Brown, a dietician at Kingsbrook who is organizing against the closure, says removing hospital beds will compound the racial and economic inequities that the hospital and community face.

Brooklyn already has 2.2 hospital beds for every 1,000 people, while Manhattan has six. “We have some of the highest rates of long-term chronic disease,” Brown explains. “When you compare that to Manhattan, where incomes are higher and people have better access to health care, how could you take away beds, especially from people who, for most of their lives, have not had adequate access to health care? I mean, this is a public health emergency. This is a racial issue.”

Kingsbrook serves a largely Caribbean, Black and immigrant population. It’s a “safety net” hospital — one that provides care regardless of a patient’s ability to pay — and almost 90 percent of its patients are either Medicare and Medicaid recipients or have no health insurance. Medicare and Medicaid reimburse at a rate below the actual cost of its services, and because Kingsbrook has so few patients with private insurance, it cannot offset its costs. Like many safety-net hospitals, it operates on a very tight budget, making cuts to inpatient services a financially attractive option. 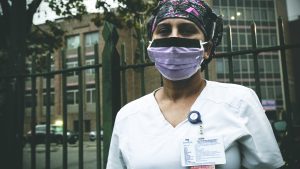 The loss of hospital beds and inpatient services has been a pattern across the city over the past two decades. Since 2003, 18 hospitals in New York City have closed, most in low-income neighborhoods that are home to people of color, according to the Association for Neighborhood and Housing Development.

Some of those closures, including those of St. Vincent’s in the West Village and Long Island College Hospital in Cobble Hill, two of the city’s affluent neighborhoods, have become notorious as giveaways to politically connected luxury real-estate developers.

Alexander Rovt, a billionaire real-estate developer, sits at the head of the board of directors of One Brooklyn Health, a not-for-profit corporation established in 2017 that owns Kingsbrook; two other Brooklyn safety net hospitals, Interfaith Medical Center and Brookdale University Hospital Center; a nursing home; and a dozen ambulatory clinics.

Rovt made his fortune as a Ukrainian fertilizer magnate before investing heavily in New York real estate — as well as in Gov. Andrew Cuomo, who has received more than $350,000 in campaign donations from Rovt and his wife, Olga, since 2010.

“It raises questions about whether the nature of this project is about making money for some people or whether it’s about truly meeting public health and community needs,” says Kingsbrook nurse Julie Keefe.

Gov. Cuomo’s plan is framed as a transformation of Central Brooklyn’s health-care services that will provide much-needed improvements to the community through outpatient health services and affordable housing. It will consolidate Kingsbrook, Interfaith and Brookdale into a unified health care system that aims to be more cost-efficient. The plan proposes remaking Kingsbrook’s five-acre campus into a “medical village” that would include affordable housing units with on-site urgent care, primary and specialty-care services. While the rehab and psychiatric units would remain open for inpatient care, all other services would be outpatient.

The unified health system, says Enid Dillard, Kingsbrook’s director of marketing and public affairs, will provide transportation between facilities, so emergency department patients can be transferred to an inpatient care facility nearby if needed. Suite 100, Kingsbrook’s outpatient specialty-care center, will continue its services. If patients need to be admitted, Dillard explains, doctors will recommend that they be transferred to Brookdale or Interfaith. Many patients may be assigned a new doctor in a new location.

Dillard is enthusiastic about the changes, saying that they will provide services that the neighborhood’s residents often lack — primary care, preventative care and access to specialists. The medical village will have care targeted toward strokes, diabetes and heart disease, all ailments prevalent in the community.

“Everything that we know is plaguing our community in terms of chronic disease, is what we will be focusing on in that medical village, in an outpatient capacity,” she says.

While Kingsbrook health-care workers see the closure of inpatient beds as a threat to the community’s health, Northwell Health’s 2016 Brooklyn Study, the study that has guided the transformation plan, concluded that Kingsbrook’s inpatient beds were never full and that the area in fact had too many hospital beds.

The study used numbers from 2015. During the coronavirus surge last spring, according to Dillard, Brookdale, Interfaith and Kingsbrook combined had fewer than 500 COVID-19 patients occupying hospital beds, with about 120 of them inpatients at Kingsbrook.

Julie Keefe, who was fighting to save her patients’ lives, disputes that. At the height of the pandemic’s first wave, she says there were over 200 beds at Kingsbrook constantly full with desperately ill coronavirus patients.

“The idea that a hospital is going to be closed and beds lost before we even reach the height of the next wave is almost unbelievable,” she told The Indypendent. “It’s scary. It’s not cautious or careful.”

Closing the hospital, Nasim says, would be “just putting a shot into somebody’s head and just killing them. This is crazy.”

Community Concerns What does it mean for a community when their hospital closes? The Indypendent recently spoke with East Flatbush residents outside the Kingsbrook Jewish Medical Center, which is slated to be closed at the end of 2020. 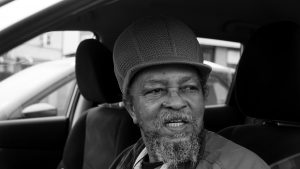 Keith Downer/Neighborhood resident for 10 years: Well, it’s tragic, but it’s no surprise. That seems to be kind of the trend, closing hospitals, closing certain important places that used to benefit the community. I remember there was a nice hospital up here called St. Mar that just closed out of the blue. Long Island College Hospital too. A lot of minorities used to benefit and then just big business took over, tearing things down for apartment buildings. They tell you it’s gonna be inclusive with low-income people, but you never see that much, you know, you might see a small percentage. I’m not surprised, cause that’s money. I’ve seen a trend where they’re closing down the major hospitals, and they’re putting up these little medical places, you know what I mean? Soon there probably won’t be any hospitals. Maybe some would say it’s institutional racism. 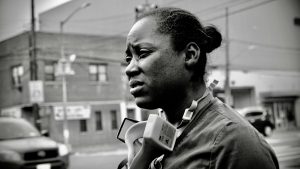 Layne/Kingsbrook Hospital nurse: I don’t think that a lot of the community kind of caught wind of it yet. I think it will have a large effect on the community because this place has been here for a long time. Closing beds puts pressure on the other hospitals. There are still COVID patients. And these people need us. 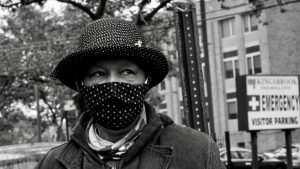 Beverly Edwards/Neighborhood resident: My mother, she was sick, I was there taking care of her, when all of a sudden she came down with this coughing. She was almost 100 years old. And I brought her here, at the end of April. Then she didn’t come home, I never seen her again. We buried her, just two persons, me and my son, nobody else at the funeral. It was terrible. They said no visitor, no visitor, until she died. What’s gonna happen if they close? It’s rough already, can’t be any more rougher. So what will happen next? More dying? 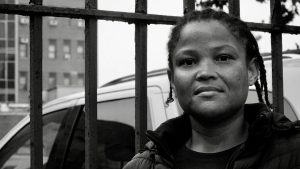 Fabiola/Neighborhood resident & former health care worker: It’s not a perfect time to close beds. They should wait, but maybe they need funds or something? A lot of the underserved population will have a problem. I know it’s not good, but at the same time it’s not far from other hospitals. So if people cannot come here they will go to other hospitals. But also that means it might become overcrowded. 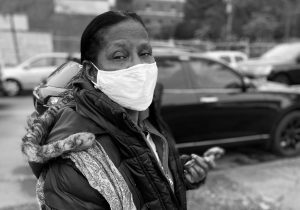 Cecelia Barran/Neighborhood resident/Kingsbrook patient for 20 years: Why didn’t they already send letters to patients? I am a diabetic and a hypertensive case, and now I have a problem with my foot. Kingsbrook is convenient for me because I just live a few blocks up the road. This is my hospital. They have all of my records there. So when I fall sick I have to look for another hospital?