The Indypendent
Menu
A Free Paper for Free People
Jennifer Bennetch of Occupy Philadelphia Housing Authority speaks at a rally at the group's encampment. Occupy PHA won a commitment from the city to turn over 59 vacant buildings to a community land trust. Photo: Maddie Rose.

The Philadelphia Housing Authority has agreed to turn 59 vacant buildings it owns over to a community land trust created by a group of homeless people, in exchange for them ending their months-long occupations of two vacant lots and 15 houses.

“As soon as our organization is ready, they’ll transfer the first 10,” says Jennifer Bennetch of OccupyPHA, one of the main organizers of the occupations. Philadelphia Housing Action, the umbrella coalition, has filed papers to incorporate the land trust, but details are still being worked out. Community land trusts own the land under the buildings, preventing it from being sold for a profit. 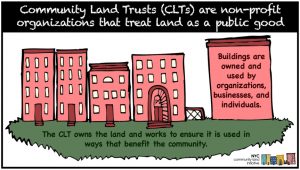 The occupations began in March, when groups of people, mostly mothers with children, began moving into vacant houses owned by the city’s public housing authority, eventually occupying 15. In June, scores of homeless people set up two encampments demanding permanent housing — one on Ben Franklin Parkway, the boulevard leading to the city’s art museums, and a smaller one in the Sharswood neighborhood, across the street from the Philadelphia Housing Authority’s headquarters.

In a deal announced Sept. 25, the housing authority agreed to turn over 50 buildings to the land trust. On Oct. 5, it agreed to turn over nine more on a block near the Sharswood encampment, “Camp Teddy,” in exchange for the occupiers immediately leaving. Construction of a shopping center and a 98-apartment complex on that site was scheduled to start the next week.

The 59 buildings in the deal are generally two to four stories tall, with two to six bedrooms, Philadelphia Housing Authority CEO Kelvin Jeremiah told The Indypendent. Most were acquired by the authority after being abandoned, have been vacant for 40 to 60 years and “are not livable in their current form,” he adds. They were slated to be turned over to private developers under the Rental Assistance Demonstration program, an Obama-era initiative that allows public-housing authorities to cut deals with private entities in order to finance renovating or replacing buildings.

The 15 houses occupied by families will not be included in the deal, because the authority had already planned to rent them to new tenants, says Jeremiah. The occupiers, who picked those houses because they didn’t need much work to make them habitable, will get a choice of staying in them as public-housing tenants or moving to other public housing units.

The Camp Teddy occupiers liked the block the nine houses are on, but “they needed more work than we were able to do,” says Bennetch. But as part of the deal, the housing authority and the Philadelphia Building and Construction Trades Council will create a program in which homeless people will get jobs and training working on the renovations.

The building-trades unions had about 200 jobs riding on the Sharswood complex. “We had a $52 million community-revitalization project that was on the brink of collapsing,” says Jeremiah. “I could not deliver the site unencumbered. That enabled us to have an amicable discussion.”

Many crucial details remain unresolved, particularly how to pay for the renovation work, who will get to live in the houses and how to administer and maintain them. Philadelphia Housing Action had demanded that the houses be designated for “extreme-y low-income” people — about $20,300 for a single person and $26,000 for a family of three under federal standards for the area. The occupiers will need to get insurance and licenses for the property before it will be transferred, says Jeremiah.

Most of the houses will go to people involved in the occupation, says Bennetch, with some people wanting to live together in groups and some sentiment to give women, the elderly and disabled first priority. She doesn’t want it to be “like we’re just throwing people in houses.”

“We built community all summer,” she says. “We want to keep that together.”

The Philadelphia occupiers “need to be given credit,” says Valerio Orselli of This Land Is Ours, a Lower East Side-based land trust. But, he adds, they will also need public financial support and advice on management from experienced experts.

Taking over buildings in bad shape “requires major costs” to repair plumbing, wiring and roofs, he explains — a lesson he learned in the 1980s and 1990s, when he was head of the Cooper Square Committee, which was then putting together a 22-building community land trust on the Lower East Side.

Community land trusts ensure long-term affordability, especially when combined with a mutual housing association to manage the buildings, Orselli says. They also can operate more sustainably than individual buildings, by buying things like fuel collectively, having a common reserve fund for major repairs and sharing rents from commercial space.

There are about 15 in the five boroughs now, according to the NYC Community Land Initiative, a coalition of land-trust groups and supportive organizations. Most are in Manhattan and the Bronx.

“I’m actually very excited by the Philadelphia model,” says Sandra Lobo, executive director of the Northwest Bronx Community and Clergy Coalition (NWBCCC), which is trying to assemble 28 sites for a pilot community land trust in the Fordham Road area, from University Heights to Belmont.

Transferring land to community ownership, she says, is “a must, given that neighborhoods like ours are experiencing serious displacement pressures, heading into a homelessness crisis and are reaching record unemployment rates.”

For-profit development, she adds, simply can’t deliver the low rents people need. Mayor Bill de Blasio’s affordable-housing program, which relies on leveraging trickle-down from luxury development, can’t provide apartments for people making much less than $50,000 a year without public rent subsidies. That is more than twice the median income in some Bronx neighborhoods.

Nonprofit development can provide somewhat lower rents, Lobo says, but collective ownership will give ten-ants a voice in planning their communities, such as on re-zoning.

The biggest obstacles to expanding land trusts in the city are money and that there is not much available land.
“I think community land trusts can be a really valuable model, but I don’t see it scaling up to thousands of units,” says Steve Herrick, the Cooper Square Committee’s current executive director. “The horse is out of the barn, because the city gave away so many buildings.”

The city now owns less than 1,000 buildings, and maybe three are on the Lower East Side, he says. In the 1980s and 1990s, it had taken over thousands of abandoned buildings, but sold many to developers or moved them into programs where affordability requirements expired after 20 or 30 years.

Philadelphia, whose population has declined by 20 percent since 1960, is widely perceived as having more vacant properties available. But the housing authority owns only about 300 to 400 abandoned houses, says Jeremiah. (The Philadelphia mayor’s press office did not respond to a question about how many vacant properties the city itself owns.)

The 28 city-owned sites NWBCCC is seeking are a mix of in-use residential buildings, empty lots and mixed-use vacant buildings, says Lobo. The city often sells buildings it seizes for tax debts or unsafe conditions to the highest bidder, she adds, and “we believe they should be turned over to the communities facing displacement.”

This Land Is Ours, which is putting together a four-building community land trust in East Harlem, is also looking at decommissioned church properties. It offered $18.5 million for a former Catholic church at 44 Second Ave., but the Archdiocese of New York sold it to a real-estate investment firm in March for $40 million.

Another source is HDFCs, which are former city-owned buildings converted to co-ops that can’t be sold for a profit. Many are “becoming financially unviable,” Orselli says, for reasons such as not being able to afford major repairs. NWBCCC has committed to bringing two HDFC buildings into its community land trust. Cooper Square added two last year.

Financing, however, “is even scarcer” than it was in the ’90s, Orselli says. Cooper Square was able to fix up its collection of aging tenements because it got forgivable loans, which aren’t available any more.

“The only way to supply permanent housing for the lowest incomes is not to rely on loans that have to be repaid,” he says. But in the long run, he adds, it would be cheaper for the city to spend money building that housing than to pay $4,000-5,000 a month to keep homeless people in hotels.

“Our vision is that everybody in the Bronx is living in a building that has some kind of collective ownership and collective decision-making,” says Sandra Lobo.