The Indypendent
Menu
A Free Paper for Free People
DELAYS: A mother and her sick child wait for hours to cross the international bridge into Brownsville, Texas to receive medical care.Photo: Erin Sheridan.

BROWNSVILLE, Texas — The lower Rio Grande Valley, the border between Texas and Mexico, marks the end of the shortest path between Central America and the United States. And Brownsville, a city of 183,000 people at its easternmost edge, has become a crisis zone, as thousands of Central Americans fleeing for their lives have been stalled at the border by the Trump administration’s racist and inhumane immigration policies.

A Brownsville resident who has a good-paying, full-time job, legal status and fluency in both Spanish and English might tell you there isn’t a crisis, but the metropolitan area’s poverty rate is nearly 30% — the highest in the country outside of Puerto Rico. Unincorporated colonias dot the city’s edges. Many of the wooden houses are built by hand. I often see men and women carrying groceries across U.S. Highway 77 in oppressive afternoon heat.

On March 20, Trump administration officials used a Centers for Disease Control and Prevention order to shut down the entire U.S.-Mexico border, and with it the asylum system. Customs and Border Patrol statistics indicate approximately 150,000 people, including an estimated 9,000 children, have been expelled under that order.

When I arrived in October 2019, approximately 1,500 refugees were living in tents on a dirt levee in Matamoros, Tamaulipas, just over the Gateway International Bridge. That number quickly swelled to nearly 3,000, although it shrank after the COVID-19 epidemic hit. Mexican immigration officials and shelter workers began telling families they would not win asylum, and suggested that they board buses south to Tapachula, Chiapas, on the border with Guatemala.

Locals, many of whom are Hispanic and of Mexican heritage, work for CBP and ICE. In February I watched one local man, a CBP press officer, stand with his colleagues laughing as a woman in her fifties seeking asylum lay on the ground a few feet south of the international line, gasping for air. She was having an asthma attack. The CBP officers did not cross the invisible line and instead continued to converse among themselves. The woman’s attorney called for help. Volunteer doctors ran up to the bridge from the refugee camp and brought the woman on the concrete to safety.

The Remain in Mexico program grants exceptions to anyone with a serious health issue. But CBP officials without medical qualifications routinely deny them orally, with no written decision attorneys can question. Immigration lawyers stand on the bridge with sick children for hours, waiting for CBP to bring its physician to evaluate them. Sometimes in dangerous heat, sometimes in freezing winter rain. One told me that a boy who was finally allowed in after a two-hour wait last winter suffered a burst appendix in the ambulance on the way to the hospital in Brownsville.

Prior to the pandemic, new arrivals to the camp would pitch their tents and ask Mexican officials to put their names on “the list.” Some of the officials won’t without an adequate bribe. Now, the camp is fenced off by Mexican authorities. Before hearings were postponed, families lined u p four hours in advance of hearings in the tent court system in Brownsville to be checked for cleanliness. If families miss the call to cross, their cases can be dismissed in absentia. If there is a mistake in any paperwork, an asylum seeker will wait months for a new hearing to file it again. Some families are placed in separate proceedings. Some are given court dates two to four hours away, with no means of transportation. Eventually, CBP begins handing out strips of paper with a number to call instead of giving court dates on formal notices to appear.

In Brownsville, most public events are held in both English and Spanish. The CBP press officer who laughed at the woman with asthma later in the spring plays “Taps” on his bugle at a gathering honoring local law enforcement in front of the Cameron County courthouse. Everyone is cordial. But within the surrounding community there are class divisions based on when and why people emigrated, where they’re from, how much money they have and to what extent they’ve assimilated. The Border Patrol vehicles swarming the streets of low-income immigrant neighborhoods and the border wall running through backyards are too commonplace to draw much outrage. 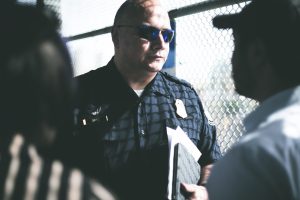 LOOKING FOR ANSWERS: A U.S. border official is confronted in January on the Gateway International Bridge by members of the Congressional Hispanic Caucus. Photo: Erin Sheridan.

The government can’t build the wall along the river because it would sink into the soft ground. Instead residents’ properties are seized through eminent domain. On the south end of Brownsville, the wall runs through cotton fields. Border Patrol has to leave it open so farmers can get to and from their fields on the U.S. side.

The border region is militarized as far as 100 miles into the United States. At the Sarita checkpoint, an hour north on Interstate 69E, stacked surveillance cameras dot the road, and CBP clears each car that leaves the Rio Grande Valley. Anyone without documents who is caught having previously entered the United States without documents will likely serve time in prison.

The wall does not prevent the flow of narcotics, nor has the militarization of the Valley made life any safer. In Brownsville, stray bullets have hit joggers by sections of the border wall that run near the local community college.

It also hasn’t stopped desperate people from trying to cross the river. A pregnant woman and her husband leaving the refugee camp on Mexico’s side of the river made it across in late summer. Their baby was born at the hospital in Brownsville. But in August and September there were at least seven bodies discovered on the Matamoros side of the Rio Grande. One was a young man seeking asylum from Guatemala with a wife, a child and a grandmother. He brought his family over in the middle of the night without paying a smuggler. The mother and child were apprehended and returned to Mexico.

There is little or no support from either government, so aid is organized by locals who live on both sides of the river. Residents feed refugees by the thousands.

In January, volunteer medical staff prepare to conduct a census hoping to coax information from families, most of whom are afraid to talk for fear of losing their asylum cases, retaliation or both. There are stories and rumors of kidnappings and assaults. A doctor inside a makeshift pharmacy says she sees the cuts and bruises, and she hears the stories. Families living in tents complain that immigration judges seem disengaged, do not appear to understand the paperwork presented in court. 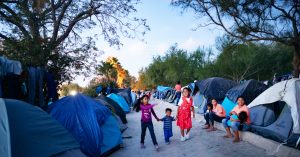 The asylum seekers have organized themselves on social media and advocate for humane public policy. Some run restaurants in front of tents with tables and seats made of wood, chopped from the trees. Food boils in pots on clay ovens. Crews do maintenance and sanitation work, build sinks and showers. Volunteers and residents organize schools.

But there is always the sense that the camp is not welcome at the bridge. Authorities on one occasion used machetes to destroy the tents of Mexican asylum seekers ushered into the United States in the middle of the night under an alleged agreement between CBP and local officials. In the winter, children walk around in flip flops in 40-degree weather, and tents fill with water and blow over in the wind.

The Gulf Cartel’s presence is not discussed but is always felt. Photos occasionally surface of cartel members, armed with military-grade rifles, handing out food, supplies and treats to the poor. Recently the local faction allegedly bribed taxi drivers to park their cabs on the international bridges, in protest of the governor of the state of Tamaulipas ordering a federal drug task into the city. Public buses are placed in the middle of the highways leading out of Matamoros. Residents are warned of a potential “large-scale” conflict and told to shut down businesses and stay inside. Someone sets a Coca-Cola truck on fire in the center of town. The asylum seekers on the levee have nowhere to go.

Across the river in a small shopping district on the north side of Brownsville is a former Walmart, one of the facilities in which the world witnessed children being held in cages. Locals who work at the center tend to keep quiet about their place of employment. Money means survival. There is a Southwest Key facility in downtown Brownsville where unaccompanied minors are held in Office of Refugee Resettlement custody. Only once, I saw a teenage boy pressing his face against the wrought-iron fence.

In April a friend tells me about a historic Catholic chapel along the river, an hour up the border. She says this of the land:

Erin Sheridan was a Spring 2018 Indypendent intern. Since then, she has covered housing displacement and human rights and worked for the past year as a staff reporter for the Brownsville Herald.