Demonstrators and police faced off Tuesday outside the New York City Police Benevolent Association’s headquarters in Lower Manhattan as part of a “Strike The PBA” event.  The event — which featured songs, dancing, drummers, and speeches — called for the PBA to be kicked out from the larger labor movement due to its support of officers who have killed New Yorkers and its endorsement of President Donald Trump.

“We have a campaign that must begin now on a new level … it comes out of our objection to a fascist president,” said Reverend Billy Talen of the Church of Stop Shopping, the main group organizing the event. “Nothing has cultivated the culture of murder in the name of law enforcement more than the policemen’s benevolent association.”

Savitri D., director of the Church of Stop Shopping, agreed and criticized the legitimacy of the PBA’s place in labor.

“This is not a union,” they said. “This is organized crime.”

For two hours, 70 protesters — decked out in colorful costumes and accompanied by a giant “Baby Trump” balloon — marched and chanted slogans while an equal number of police watched from the margins outside of their union headquarters at 125 Broad Street near the Staten Island Ferry.

“We have the swaying hips and the colors and the drums … and our friends [the police] are lurking in the shadows over there,” said Reverend Billy. “Look at them over there! What are [they] afraid of? No one over here has committed any violence, can [they] say the same?”

In addition to the Church of Stop Shopping, attendees represented a coalition of several different groups such as Rise and Resist, the NYC Democratic Socialists of America, and NYC Veterans for Peace. 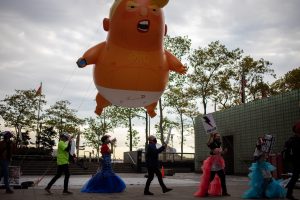 The diversity of the attendees was also represented in the varied demands presented by speakers. Some called for the complete dissolution of the NYPD, others simply for the PBA to disband, while others still argued that reforming the police was preferable. In a play on words, one protester referred to the union as the Police Malevolent Association to cheers and laughter.

However, a throughline among all participants was a deep-seated frustration with the NYPD who many said they felt like operated with impunity and hostility toward many of the communities it purports to serve.

“I have been fired for being late to work,” said Natalia — an activist with the DSA’s Defund the NYPD Campaign. “[Yet] the NYPD can still keep their job even if they murder someone in cold blood.”

Organizers said that they hoped the event would attract more attention to the PBA’s role in defending police misconduct and raise the political cost of doing business with the union, whose endorsement was once coveted by local politicians but is now much more controversial. And although the performers’ colorful clothes and the sound of drums reverberating off nearby buildings did succeed in attract attention from passersby, their reactions were mixed.

One man — who gave his name as Michael and said that he worked in the building next to where the protest took place — came out a few times to snap photos and grinned as he listen to the chants.

“I enjoyed this, you know, it’s freedom of speech,” he said. “Its both sides [though], both sides need to calm it down.”

Coming at the end of a summer of a mass movement against police brutality in American history, the gathering on Tuesday found itself sandwiched between relevant events. Participants said that both the killing of Walter Wallace Jr. in Philadelphia on Monday afternoon and the rapidly advancing general election on November 3 colored their feelings about striking the PBA.

For Jay W. Walker, an organizer with Rise and Resist, the moment contained a mix of feelings.

“I’m feeling cautiously optimistic … I’m in this hopeful place that people fighting on the side of light and love are going to win over the forces of hate and darkness,” said Walker. “[But the recent killing of Walter Wallace] informs today. It gives a fresh wound to the scarred body of the body politic … it’s just another in a long litany of horrific abuses against communities of color by police forces all over this country.”

More NYPD Coverage in The Indypendent

The NYPD Has Its Own Scandinavian Welfare State by John Tarleton

The City Hall Occupiers in Their Own Words by Amba Guerguerian

Youth-Led Protest Calls for Defunding the NYPD by Kiara Thomas

A New Era of Surveillance for the NYPD by Katya Schwenk