The Indypendent
Menu
A Free Paper for Free People
New York City students protesting in 2019 against the police presence at their school.Photo: Urban youth Collective.

Public schools are navigating the return to in-person instruction this fall and there is no doubt that the safety of students, parents and school staff has been compromised. COVID cases are already surging, leading to school closures in Brooklyn and Queens and we recently saw the first confirmed COVID case of a student attending in-person classes at a public special education school in Brooklyn. As members of the education community, the topic of safety has been on the forefront of our minds for the past several months. It is easy to believe that this is the first time in years that the safety of students has been put at risk, but this is not the case — the practice of taking funds away from schools and directing them into the hands of police has made our schools an unsafe place to be for a very long time.

On July 1, without the knowledge of many parents, the city implemented a budget cut of nearly $2.7 billion to the Department of Education over the next five years. The Mayor, together with the City Council, issued a hiring freeze on educators and social workers, cut over $700 million from the DOE for 2021 alone and left no budget for an opening strategy that would meet basic safety precautions. In the months before the finalization of the budget, students, parents, educators and school staff urged city government to support them in meeting the extraordinary needs of the public health crisis – to which they were met with the aforementioned cuts. Comparatively, the NYPD budget was left mostly unchanged, with the City going as far as increasing NYPD headcount in schools.

The decision to fund police over public schools is not new or unique. For decades, the NYPD budget has steadily increased while both municipal and state governments have siphoned money away from public school classrooms. This defunding has made New York City one of the most unequal school systems in the country, with the most underserved schools serving Black and Latinx communities. The infrastructure of NYC’s public education system is so underfunded that fifty percent of school buildings surveyed in 2019 were flagged as having insufficient systems for air ventilation, a fact that compounds the belief of many school workers that reopening “safely” is impossible. Defunding has also produced stark racial disparities in college readiness among high school graduates. A 2019 report from GraduateNYC recorded college readiness rates of only 20 percent and 23 percent among Black and Latinx graduates compared to rates of 53 percent and 65 percent among White and Asian graduates. Graduation rates, too, have declined across non-White student populations. The City Comptroller reports that college readiness rates declined in about 16 percent of schools between 2011 and 2015, with the lowest levels of college readiness clustered in school districts in the Bronx and Brooklyn.

Despite this data, the majority of education cuts in the recent 2021 Capital Budget were to Equity and Excellence for All programs which are critical to improving college enrollment among the most underserved student populations. The Equity and Excellence Program initiative started in 2015 with the intention of ensuring that all NYC students have access to high quality 3-k, pre-k, algebra, computer science and programs to advance college readiness. “Equity and Excellence” faces a cut of a staggering $216 million. Why is this happening? Because New York City government would rather police Black and Latinx students than provide for their safety and education.

Policing is the absolute antithesis to education. All of the excessive policing in schools that we are witnessing is exactly what teaches our youth, especially our underserved youth of color, to feel small. It is what discourages our young people from stepping into their power, from being comfortable in any area of their lives whether it be at school, work or in their neighborhoods. Policing makes us shrink ourselves down and force ourselves into a system that strips us of our dignity. Within this disparity, students are returning to school with new metal detectors, new police, new systems of policing, but no new teachers, no new guidance counselors, no new infrastructure to protect their safety, no PPE, barely a decent reopening plan — so what does the city really believe safety is?

City Council’s idea of safety looks like policing and surveillance. However, for the students, education workers and grassroots activists of the movement for education justice, safety looks like divesting from police and investing in education. We want education equality and schools without poor ventilation systems that make students and staff sick. We want schools where police are replaced by counselors and healing-centered approaches to conflict-resolution. We want small class sizes and curriculums that reflect diverse scholarship. We want more positions for Black and Brown educators and staff that reflect our communities. These demands work to create a more culturally responsive school environment so that students feel safe in their schools and can thrive academically. 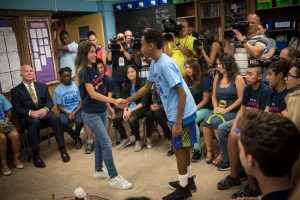 COVID has allowed us to watch the current system crumble, for everybody, in real time. Now, instead of only serving the privileged, it serves nobody, leaving the City government’s definition of safety turning on its head. The norms of the system no longer apply. The SAT and ACT, which were so heavily emphasized as our golden ticket to college, are now largely optional for even the upper-echelon schools like Barnard, Columbia and Harvard.  How can anyone determine admission through grades in the midst of a pandemic, recession and civil unrest? The simple notion that any youth, especially youth of color, who are disproportionately affected by COVID-19 and systemic failures, can function as “normal” is a thoughtless, disrespectful belief. The Department of Education and our city leaders have only provided empty statements to do better by their students of color — which begs quite a personal question to me: If Black, Brown and Latinx lives mattered so much to our leaders, as they have been saying since the end of May, then why have they been facilitating our demise?

Nawal Abdelqader is a youth community organizer for the YA-YA Network. To read more about the policy demands of the police-free schools movement click here.