The Indypendent
Menu
A Free Paper for Free People
Hundreds of New Yorkers from the Protect The Results coalition marched down 5th Avenue on November 4th demanding that all the votes be counted in the presidential race between Joe Biden and Donald Trump.Photo: Sue Brisk.

Protesters gathered at the New York Public Library building on Wednesday afternoon to demand that all votes cast in Tuesday’s presidential election be counted. The demonstration — one of dozens held across the country — was billed as a rebuke of President Trump’s attempts to halt vote tabulations in key states.

“Donald Trump last night in his speech made it very clear by declaring victory that he is going to try shenanigans … to not count every vote,” said Jay W. Walker — an organizer with Rise and Resist. “This is something that folks have been prepared for because we know how Donald Trump operates. We’ve been preparing for this for over a month now.” 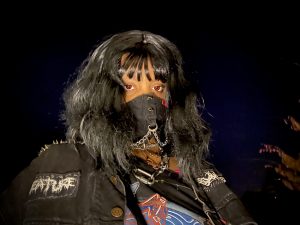 Kai, 20, a first-time voter, was among the protesters calling for everyone’s vote to be counted. Photo: Sue Brisk.

The initial gathering on the steps of the public library’s 5th Avenue entrance brought together a number of disparate voices and at times, resembled dueling rallies with multiple simultaneous speakers.

“You can’t win [anymore] in New York as a Democrat running like a Republican-lite,” she said.

People’s reasons for attending Wednesday’s action were just as diverse as the speakers present.

For Condi — a politically active Joe Biden voter — the potential of four more years of Trump’s attacks on environmental regulations prompted her to take to the streets.

“I really think that if Trump gets four years, the planet is over and everything good about the earth is over,” she said. “I’m very, very scared of four more years of Trump.”

As demonstrators began to march, their numbers were swelled by late arrivals as well as contingents from the Democratic Socialists of America, the Communist Party USA, and New York City Communities for Change.

One marcher, Tony — an Iraq War veteran — said that he felt that there were also a lot of veterans in the crowd, although he conceded that they might not be sporting any sort of identification. Trump’s attacks on the military had, he believed, galvanized some veterans against the Republican incumbent and driven them toward Biden.

“Believe it or not, we got a lot of veterans here,” he said. “Trump [doesn’t speak to us as veterans]. He called us losers [and] any other president that I know of that said anything bad about veterans,  they don’t say  F*** us. This cat, I don’t know what’s wrong with him.”

In preparation for potential post-election violence, several businesses downtown had boarded their windows. These precautions seemed to contrast sharply with the peaceful atmosphere of the march, which itself began to resemble a New York parade. Passersby and construction workers watched from the sidewalks — some voicing their support for the marchers, others their indifference.

One man who asked to remain anonymous argued that the march was a symbol of a functioning American democracy.

“It’s what Americans are supposed to be able to do,” he said.

“I think it’s very good — people have the freedom to go to the streets [to] tell [the government] what they think,” she said.

Yet, while most bystanders seemed to approve of the demonstrators, this view was not universal. One woman, Samantha, questioned the political affiliation of the participants and said that she was worried about potential political violence.

“I am hoping [they] don’t try to burn my apartment building down like they did a couple weeks ago,” she said. “They look peaceful right now, but I’m wondering if they’re going to start rioting once they get to my area.”

Despite having a distinctively anti-Trump flavor, the protest also didn’t pull any punches when it came to Biden. Many participants and bystanders described a lack of enthusiasm for the Democratic candidate.

One woman, Dana, said that although she supported the marchers, she hadn’t voted on Tuesday because she did not feel like her vote mattered or that either candidate would affect the issue she cared most about: racial justice.

“Either way you put it, we are going to be fucked up — point blank,” she said. “I didn’t really feel the need for my vote [but] if there was somebody worth me voting for — somebody I thought was going to make some changes — I would have been the first one on the line.”

The marchers marched down Fifth Avenue to Washington Square Park where some of them held a die-in. A second march left Washington Square and was surrounded and attacked by the police. According to the NYPD, there were at least 58 arrests.