Celebrations erupted in Washington Square Park Friday evening as it became more apparent that Vice-President Biden would win the presidency. Hundreds of excited Biden supporters — as well as large groups of people simply hoping to enjoy the warm evening air — descended on the park around 7 p.m. as it was announced that Biden had taken a growing lead in several battleground states.

“We have to celebrate,” said Roland — an immigrant from the former Soviet Union. “Because the goodness of this country won … it shows the world that America is still America and that nothing and no one will turn it into a fascist state.”

Revellers danced and mingled around the park with many expressing a sense of cautious happiness that there might finally be something to celebrate after a long year.

“People just want to be happy,” said Marcelo, one of the festivities’ participants. “We’re tired of being scared … I think this just represents that people just want to come out because we’ve been suffering through this year.”

The celebrations, however, quickly became hectic. A large crowd began dancing around a mobile DJ booth that blocked Washington Square South and at one point during the night a naked man ran through the park’s fountain shouting, “I am Nevada!” (one of the last states to be counting election results). Despite these chaotic instances, tensions with police remained low and marked a significant deescalation following several days of NYPD officers arresting protesters.

These arrests were on several participants’ minds as the crowd began to march away from Washington Square Park. For a group of college students who participated in the march, the blame for any recent violence lay squarely with the police.

“We’re lucky the police were peaceful,” said one student — who requested anonymity. “We were always peaceful. These pigs are always out here trying to hurt us.”

As the crowd marched uptown, they retained their celebratory mood. People danced the Electric Slide as the march reached Madison Square Park around 9:40 p.m. before dispersing soon after.

However, police — in hard helmets and armed with batons — did attempt to forcibly clear out Washington Square Park shortly after midnight. They announced that the park was closed and began to shove several people before arresting two others.

They moved in and immediately started pushing on people. At least two arrests. pic.twitter.com/R7BsVAK9vC

Uptown a different kind of rally played out. Around twenty protesters gathered at Carl Schurz Park on 86th Street and East End Avenue for a nightly Black Lives Matter vigil, community forum, and march to the mayor’s residence at Gracie Mansion. The group behind the event — Upper East Side For Black Lives — has been holding nightly meetings in the park every day for the last 153 days and said that regardless of the election’s result they would continue to rally. 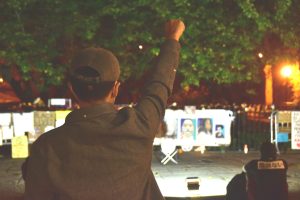 “We are out here fighting for Black lives against police brutality,” said Saundrea I. Coleman — an organizer with Upper East Side for Black Lives. “Either way [regardless of who wins] you want to hold elected officials accountable … so it doesn’t matter who’s in office [we will continue].”

As they marched, the small crowd blocked off East End Avenue for two blocks before turning onto the promenade overlooking the East River and then doubling back towards Gracie Mansion.

Passersby would sometimes honk or raise their fists in support as the group marched past, but for the most part their march attracted little attention from the few people nearby.

But for participants, it was important to be out protesting even if they were increasingly happy with the election results. Some argued that while happiness was warranted, they would not be happy until real change was delivered.

“We got a lot of work,” said John High, on of the attendees at the vigil. “It doesn’t stop [with the election] … We’ve always had the wrong people at the table. What we want, we want now.”