Post-election day vote counting in key swing states has brought Joe Biden to the cusp of victory. President Trump has responded with baseless allegations of voter fraud and a slew of lawsuits. Hundreds of his furious supporters have demonstrated outside vote counting centers demanding the vote counting stop or continue, depending on whether Trump is ahead or behind.

The Protect The Results coalition responded Wednesday with local protests held in dozens of cities across the country including here in New York City where hundreds gathered outside the 42nd Street Library before marching down 5th Avenue.. Here’s what they had to say about the elections and the need to see the vote count through all the way to the end. 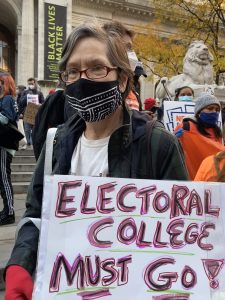 I’m heartbroken about the fact that our country is so deeply racist and fascist leaning. And I had no illusions about this. I expected the results to be very, very messy. With Trump running against a very weak candidate who is just not Trump, it’s a recipe for a failure.

I believe that massive street protests are important in getting the mainline Democrats to do anything and also the Republicans to do anything. People have to be in the streets demanding justice. 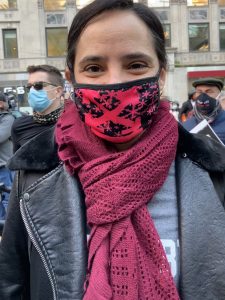 I cannot vote because I don’t yet have citizenship. I came because, though I don’t support Biden, I think it’s fair for the Biden supporters to demand that every single vote has to be counted. It’s basic democracy. This is a continuation of the Black Lives Matter movement, the struggle against the pandemic. And we have to fight together. I’m not a Democrat, but I’m here for the democratic rights of the people.

But, really I feel like there’s no democracy in America. The system is totally broken. This election was a demonstration of that. The fact that the current president is threatening to smash the popular vote is an attack against every single democratic right in this country.

That the popular vote here does not decide an election is insane to me. We have to think about, how are we going to change the electoral system in this country? Because it’s totally undemocratic. The Electoral College is fucking insane. 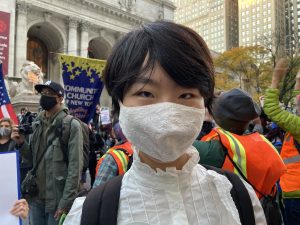 I am here just to make sure every vote counts. I’m not even a citizen of this country, but this is really important to me. Also, I live around here and I wanted to see whether the vibe was peaceful or people getting agitated.

A big part of democracy is raising the floor, protecting the most vulnerable people, including people who can’t vote, like me. So I think that’s why it’s important for me to advocate for all votes to count, because that’s protecting me as well. 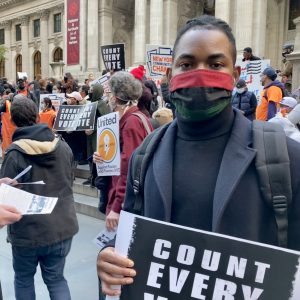 Apart from being out today, I’m also going to be donating to the legal funds that are supporting the ballot count efforts in different states. The Biden campaign is also organizing their own legal defense fund to make sure that every vote is counted, so they’re prepared in case the Trump administration tries to pursue some sort of legal action to suppress the counting of ballots.

The United States is very unique in that we have a lot of elected officials who go out of their way to prevent people from exercising their rights to vote. It shows you the lack of concern for real people on the ground and their feelings and their attitudes towards what’s going on in our country. The masses are very upset about what’s going on. Everybody feels unheard.

And this is a reason why our politics in general are becoming so polarizing, because people are so frustrated by a political system that’s not really listening to them and serving their interests. And voter suppression is probably the biggest aspect of that. It’s so important that everybody in this country gets to exercise their right to vote. Everybody gets to make their voice heard and that we get the change that we really want. We need gun control. We need legalization of marijuana. There’s overwhelming support in our country for these things. And it’s just a travesty that we have a few elected officials who are preventing this from happening for all of us. 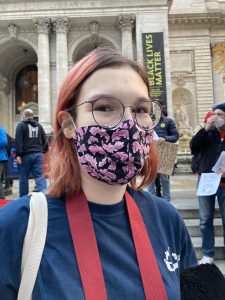 I’m just, really nervous we might have to deal with four more years. I don’t really know if our country can survive it.

The polls seem to say that Biden is winning. But I feel like there is so much hate mobilized in this country. And so people are really going to listen when Trump says “No, I’ve won.” They’re going to mobilize and try to give him the presidency. And so I hope that there are enough people on our side with the facts, with the numbers that will stop him from doing that. 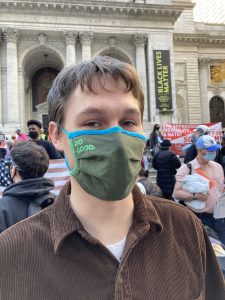 Joseph Fisher / From Colorado, moved to NY in August

This is actually the second protest I have been to since I’ve been in New York. I haven’t been like super-active in this arena. I just got nervous about the virus, all that stuff. But today I was just like, I can’t be inside. I can’t just wait. I have to do something. Say something.

I’ve been super frustrated watching voter suppression and I’m super privileged that I’ve been able to vote in every election that I possibly can. So many people’s voices aren’t being heard, especially in this election. 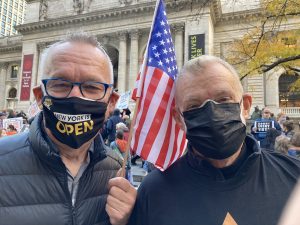 Trump is basically trying to steal the election. It’s obvious. I watched his speech last night and even though I knew it already, I was both amazed and horrified that a president could say something like that.

We’ve actually been involved with a group for four years  with a group called Rise and Resist for four years. So we’ve been very actively protesting. I was very active in the campaign, as was he, everything from writing voters to calling to. So, I mean, the next step is to basically not allow him to do this. And I mean that I’ll have to be determined on a day to day basis, I think.

We’re disappointed that the margin was not greater yesterday, but we’re hoping that Biden will pull through and we want to make sure every vote is counted. 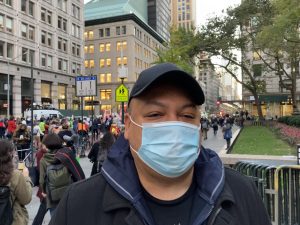 I’m angry and upset with Donald Trump, and knew that there were going to be some shenanigans going on with the election, so I wanted to come out. It’s a slap in the face to our democracy and Trump has shown over his four years in office that he’s a fascist and authoritarian. I want him out and I think the more people that come out and raise their voice, the better.

I’m really frustrated with what I see going on with politics in general. Everyone’s been affected by the stimulus in some way, and obviously COVID-19, I think it’s amoral that the Congress on both sides of the aisle have not been able to negotiate extending unemployment benefits, giving money to small business owners. It’s awful. They are leaving people – hanging people out to dry. There’s a lot of frustration and anger like mine that just wants to get out there and be around people that are like minded.

For more, see Blueprint for a Stolen Election, the cover story from our November print edition.