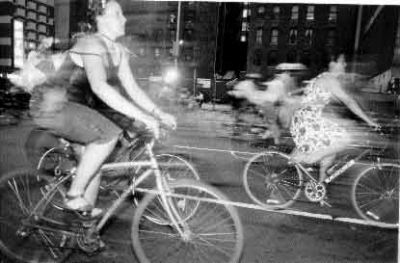 In 2003, I was hit by two cars. In a span of five months from January to June, I learned a lot about the impact of Motor City steel.

According to Transportation Alternatives, a New York City-based group that advocates on behalf of cyclists and pedestrians, an estimated 1.5 million New Yorkers have been hit by a car, and 30,000 killed, as of 1999. Each day, approximately 35 pedestrians are struck by autos in NYC. Since 1999, the rate of bicycle fatalities has nearly doubled.

But I wasn’t thinking about cars on the morning of Jan. 8. Descending from my long train ride, I was thinking about getting breakfast at the bagel place across the street.

As I walked in the crosswalk, a woman in a white convertible sideswiped me. As she turned, she stopped. But she crushed my foot with her tire.

The second instance was a classic case of rushing not to be late – I didn’t want to miss my friend’s literary reading. I had been hanging out with some bold biker friends lately. The first time I rode with them, I trailed lights behind. But a few Critical Mass rides embolden you – an evening utopia of simple, effective transportation. But that high doesn’t work without the masses.

I was very much alone on that dark Friday night when a van plowed into me.

Part of me just flew away when my body sailed through the air, flipped on the hood and drew cracked spider webs across the van’s windshield. If I hadn’t been wearing a helmet, I might be dead.

The guy who hit me flew out of his van and started bellowing, “Who is going to pay for this?”

All he had to deal with was a broken windshield. For me, no dollar amount could compensate for that long bumpy ambulance ride, feeling every Brooklyn pothole while tied tight to a stretcher. Nor can money replace my twisted spine, or my knee with its strange lumps and ongoing pain. Nor the fractures to my toes from the first accident.

I have spent hundreds of hours in physical therapy exercising my extremities, listening to smooth jazz as my Irish doctor alternates ice and heat. I know that no matter how many times I curl my toes or flex my back, I will develop premature arthritis.

The insurance companies certainly don’t care about your pain and suffering. After a few months of treatment, it’s time for your “independent examination.” Under state no-fault law, the insurance company of whomever hit you foots your doctor’s bills – but only until it’s “medically necessary.”

My first medical examiner did nothing more than ask me to curl my toes. I did my best. He grunted and went to my chart. “Case closed,” he stamped. My physical therapy days were done.

No sum can make up for the feeling of being a victim of a licensed and socially condoned ineptitude on the part of drivers, and of an insurance industry that protects that ineptitude.

I’m not alone in this of course. New York has the highest number of pedestrian and cyclist deaths and injuries in the U.S. I have friends with broken collar bones, mild concussions, and steel bars in their legs.

Not to say that all drivers are rabid lunatics – and not to say it’s all their fault. Despite constituting 48 percent of traffic deaths, pedestrians received only 5 percent of all traffic safety dollars for 2000-2004, according to Transportation Alternatives. For every motorist death, $1,505,813 is allocated in annual safety dollars. Per pedestrian: $64,977. Per cyclist? Nothing.

And yet, alternative modes of transportation continue to survive and thrive. Subway ridership hit a 50-year high last year. More bikers rode to work over the East River bridges this year than ever. And the exuberant cries of Critical Mass are swelling.

But I don’t see the Department of Transportation – or Critical Mass – each time I hop on my bike or navigate a busy cross-walk. I see the faces of those who hit me. I see their cars and the permanent imprints they’ve left on my skin, my bones, and my psyche.