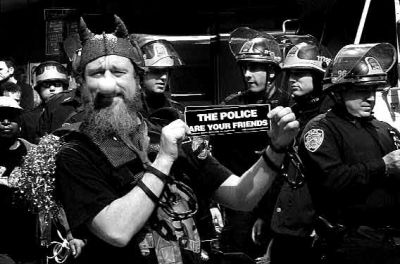 I MOCKED THE LAW AND THE LAW WON: Police look on impassively as street demonstrator sarcastically reminds populace of the truth.

“A few bad apples” is the official refrain every time police misconduct emerges. Yet every few years a big-city scandal seems to erupt involving dozens of cops, a whole division or an elite unit. In New York City it was the killing of Amadou Diallo that exposed the thuggish tactics of the Street Crimes Unit. The New Orleans police department became known as the most corrupt department nation in the 1990s. The Chicago department has been accused of engaging in systematic torture of suspects for decades.

Even the FBI was caught in a 1997 scandal when its crime lab was said to have doctored evidence in hundreds if not thousands of cases. And most, recently, the Houston department has been embroiled in a similar flap over its crime lab involving contaminated evidence and sloppy science, prompting the local district attorney to review DNA evidence in more than 1,300 cases dating back to 1988.

Human Rights Watch examined 14 of the biggest cities around the nation. It concluded “police brutality is persistent in all of these cities; that systems to deal with abuse have had similar failings in all the cities; and that, in each city examined, complainants face enormous barriers in seeking administrative punishment or criminal prosecution of officers who have committed human rights violations.” As for efforts to clean house, the report said: “meaningful reforms have fallen short.”

Police abuse experts also emphasize that the public scandals are just that: public. Given official complicity, the “Blue Wall” of silence, laws shielding cops from prosecution and even investigation, no one knows how deep the problem goes. One thing is known, that cops killed more than 2,000 people during the 1990s (the evidence has been compiled by the Stolen Lives Project at stolenlives.org.), and they are commemorated every Oct. 22 on a day of remembrance and action against police brutality.

Atlanta: This department’s poor handling of civilian complaints came to light after a shoot-out during a reported robbery in a motorcycle shop in December 1995 that left a customer dead. It eventually was revealed that police deliberately ignored numerous witnesses who saw Officer Waine Pinckney shooting customer Jerry Jackson “as he lay prone and unarmed on the sidewalk outside the store.”

Human Rights Watch observes that among many in Atlanta “there is a perception that the internal affairs unit is not interested in pursuing complaints against police officers,” and as a result many victims of police abuse “do not file formal complaints.”

Chicago: Amnesty International released a report in 1990 on the use of torture by Chicago’s police department. One case involved Andrew Wilson, who was accused, and later found guilty, of shooting and killing two officers on Feb. 9, 1982. Wilson was questioned on Feb. 14 at the South Side Area 2 station. According to Human Rights Watch, “he claimed that officers supervised by Commander Jon Burge tortured and brutalized him during an interrogation that lasted for seventeen hours. He claimed electric shocks were administered to his head and genitals and that police cranked a ‘black box’ to produce electric currents after clips were attached to parts of his body.”

A subsequent investigation by The People’s Law Office “identified sixty-five suspects who were tortured by Burge or other officers and detectives between 1972 and 1991 in Areas 2 and 3.”

An internal police investigation concluded that physical abuse was “systematic” and “included planned torture.” As for higher-ups: “Particular command members were aware of the systematic abuse and perpetuated it either by actively participating in same or failing to take any action to bring it to an end.”

New Orleans: From 1993 to 1996 at least 50 cops in the Big Easy were arrested for felonies ranging from murder to rape and robbery. In 1997 the department instituted controversial “quality of life” tactics popularized by the Giuliani administration. The New Orleans department’s own statistics found a 27 percent rise in civilian complaints of aggressive policing from the previous year.

New York City: Formed in 1992 after a series of scandals, the Mollen Commission hearings featured former officer Bernard “The Mechanic” Cawley. He told the Commission: “We’d just beat people in general… to show who was in charge,” and admitted to some 400 beatings himself involving the use of lead-lined gloves, a flashlight and nightstick. The Mollen Commission was preceded by two other inquiries that uncovered systematic abuse and corruption in the NYPD, the Knapp Commission in 1972 and the Curran Commission in 1987. Mollen revealed widespread police perjury, resulting in more than 100 overturned convictions. In the past year, the NYPD has once again come under scrutiny for a series of botched “no-knock” raids where cops have stormed into the wrong apartments, leading to the deaths of at least two innocent New Yorkers.

Los Angeles: The Ramparts scandal exploded into the open in March 1998 when LAPD Officer Rafael Perez fell under suspicion for stealing six pounds of cocaine from the division’s evidence room. After a failed prosecution, Perez cut a deal with prosecutors and began to sing. He declared, according to PBS’ Frontline, “that bogus arrests, perjured testimony and the planting of ‘drop guns’ on unarmed civilians were commonplace,” and eventually implicated about 70 officers in misconduct, including unlawful shootings. As a result, nearly 100 convictions were overturned and 140 civil suits filed that the city estimated would cost $125 million to settle. In addition, Los Angeles signed a consent decree in November 2000 that calls for a federal judge to monitor and oversee reforms in the department for five years.