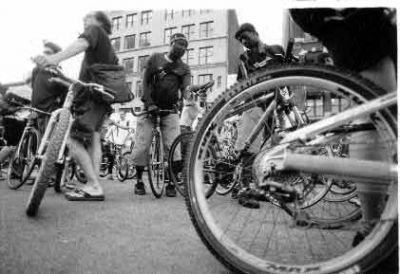 A man in his early forties, salt overtaking the pepper in his hair, abruptly maneuvers his mountain bike directly in front of a shiny BMW turning out onto Sixth Ave. The car halts with a defiant fist and a mouthful of obscenities emerging from the driver-side window. Peter, a 41-year-old journalist, holds his ground as numerous other bikers gravitate towards the BMW’s front bumper like iron filings to a magnet. “They [referring to the cars] might injure other bicyclists,” he says as his impromptu roadblock clears the path for hundreds of bikes to pass.

This is a common sight in Critical Mass, an international event where bicyclists gather in cities around the world to spontaneously cycle through typically car-congested streets. The seminal ride took place in San Francisco with eighty riders in September 1992 as an experiment in re-creating the use of public space. “We rode in the street and used the streets as a place to be, and socialize, and celebrate rather than just a place to pass through on your way to someplace,” says Joel Pomerantz, one of the original San Francisco riders.

Over a decade later, Critical Mass is a regular phenomenon that occurs on the last Friday of each month in 325 cities across the globe. To participate, one only needs to show up with a bicycle. As a result of this simple prerequisite, Critical Mass has drawn a myriad of races and ages, many of whom never cross paths during their daily lives. When this collective mass of people converges, an interesting transformation occurs; rather than bikers feeling isolated and vulnerable in urban traffic, they become a new kind of traffic. Abrasive horns are replaced by bells, noisy engines by the sound of rolling gears, city streets become significantly quieter, less disruptive, and suddenly, more human.

A Critical Mass ride’s overall success is directly tied to every rider bringing their own motivation and ideas to the celebration. “Biking in a city already gives you a greater sense of freedom…you are not in a little box, you are not underground, you’re right there, you got wind blowing in your face,” says 26-year old Matthew Roth. He built a sit-down style bike out of donated parts and rigged up a sound system with his i-pod and a car stereo amplifier. Some riders, such as Roth, customize their bikes as a form of expressing themselves. A small contingent rode on five-foot high, giraffe-like bicycles, where two frames are welded on top of each other and the only brake is a heavy foot on the back tire.

In New York City, Critical Mass has blown up from 200-300 participants last year to an estimate of over 1,200 people this past July, which is largely attributed to New York serving as host of BikeSummer 2003, a massive bike-orientated event that travels to different American cities every year. Due to the wide array of sponsorships, from bicycle clubs to environmental groups, BikeSummer 2003 was a huge success. Critical Mass was featured at the front and tail end of this 29-day extravaganza, which resulted in the NYC ride gaining tremendous exposure and momentum.

Each Critical Mass is its own entity, unique to each time and place, spurring onlookers as it snakes through city grids around the world. In this past summer’s NYC rides, reactions varied. An old lady with her thick, square spectacles feebly motioned her hand to signal the stream of bikers to get out of her way while a car service driver being supportive of the concept said, but “this is a Friday, why you can’t do this on a Monday or Tuesday?” Office workers cheered, one man jumped angrily out of his car with a club in hand, threatening bikers to move, and another driver solicitously listened to a female biker explain Critical Mass as she stymied the flow of motorized traffic. Critical Mass’s most powerful function may simply be opening a dialogue where one may have never taken place.

Finding a comprehensive definition of Critical Mass proves a difficult task. Co-founder Chris Carlsson says, “It remains an event that is more about happening, than getting anywhere. It is essentially goal-less.” However, each person still brings their own emotions, agendas, and energy to the ride. For some, this is an opportunity to voice their political opinions, from cutting down pollution to protesting the war; while for others it is merely the chance to bicycle around NYC without feeling encumbered by daily traffic. There are bikers who believe in something inexplicably spiritual about riding together en masse: the overwhelming feeling of solidarity. Simultaneously, there are those who verbally attack luxury car drivers for their lifestyle choice, using Critical Mass as an outlet of aggression and angst. When these cyclists collectively funnel into the streets, their notions are forced to react to one another, resulting in thousands of unpredictable exchanges between both participants and onlookers. Critical Mass not only re-creates the use of public space, but also can re-create the space between people, disarming each other through surprise, collapsing the distance between perspectives. 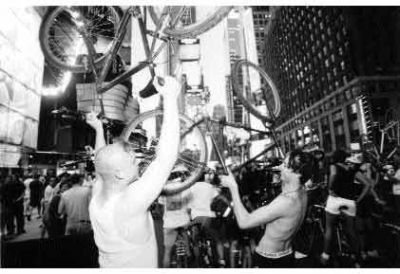