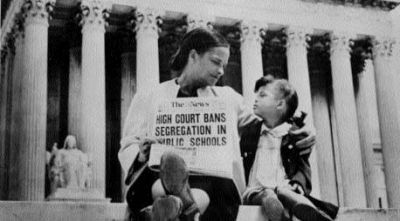 Fifty years ago, Brown v. Board of Education became one of the linchpins of a social revolution that ended Jim Crow. In many ways it was more successful at ending segregation in public life than it was in changing our schools.

Seldom has the Supreme Court issued an opinion with such profound implications for the direction of our country, and seldom has a court order been so persistently evaded by a combination of determined opposition and eroding judicial support. While over these 50 years Brown has been critiqued from as many different directions as the geometric facets of a snowflake, today it remains a cornerstone of our legal culture, but one whose relevance for the next decade is in serious doubt.

A Story Of Unredeemed Promise

It’s not surprising that, despite Brown’s order to the district courts to end segregation in our schools, resistance to the new order was tenacious, ingenious and often violent.  While opposition was expected in the South and resulted in the Supreme Court modifying its decision in Brown II with the language for desegregation to proceed only with “all deliberate speed,” by the time the Court shifted its attention from South to North the reaction was often just as resolute.  Whether the opponents rallied under the banner of “preserving neighborhood schools” or maintaining “quality education” or “parental choice,” the results were the same.  Whites were reluctant to go to school with blacks and would back up that opposition with lawsuits, legislative proposals, foot dragging of every sort by the courts, and as a last resort, fleeing integrated school districts for the predominantly white suburbs.

Studies show that today, more than 70 percent of the nation’s black students now attend predominantly minority schools.  Another dramatic and largely ignored effect of resegregation has been on Latino students.  In 1968 only a little more than 20 percent of Latino students were enrolled in intensely segregated schools, but by 1998 it jumped to 75.6 percent.

This resegregation is occurring at a time when our nation’s public school system has never been more diverse. While whites make up only 60 percent of the children in the nation’s public schools, most white students have little contact with students of color. As metropolitan school districts have become overwhelmingly black and brown, they are now surrounded by suburban schools that are overwhelmingly white, according to a study by Gary Orfield and John T. Yun of the Harvard Center for Civil Rights.

Today the Court has declared that segregation that is not the direct result of intentional conduct by public officials is beyond the reach of the Brown mandate. This means that discrimination in housing, employment, home insurance, bank redlining, allocation of transportation funds, all of which have created this modern phenomenon known as the urban ghetto, will not affect the court’s narrow view of what constitutes unlawful school segregation.

In Brown’s aftermath, our metropolitan school districts have not only remained segregated, they have also become concentrations of urban poverty. Today almost 29 percent of blacks live below the federal poverty threshold and 33 percent live in neighborhoods of concentrated poverty.  Latino students on average attend schools where 44 percent of the students are poor.

We have known for some time that poor neighborhoods often correlate with substandard schooling. Schools with predominately students of color are on average twice as large as white schools, have a 15 percent larger class size, maintain a lower quality and remedial curriculum and attract less qualified teachers. We now have recent studies showing that these same neighborhoods also have an alarming increase in chronic health problems. In a recent New York Times article, researchers revealed that in many poor urban communities, even young people are becoming afflicted with chronic diseases and dying at rates similar to those of a Third World country.

Linking this to the disparity in health care failed to explain all the varieties of deteriorating health occurring in poor urban communities. Some scientists now believe that we have created a combination of social and environmental conditions in poor communities as stark as if a line had been drawn around them.

On one side of the line are middle class residents with the normal societal distribution of illnesses. But on the other are the poor with a dramatic prevalence of heart disease, high blood pressure, kidney failure, diabetes and other illnesses that seem to be tied in some way to increased prolonged exposure to stress. Added to these reports on concentrated poverty and health are other studies that point toward institutional racism creating this harm, including its impact on school-age children.

Racial discrimination or racist events in the lives of African Americans have now been isolated as a special debilitating health factor. Reports have begun to measure the impact of racism as a specific stress factor that impacts physical and emotional health.  Stress is not simply how we feel or react to events; there is a clear biochemical reaction.  Prolonged exposure to stress literally begins to wear our bodies down. The prolonged, grinding daily impact of institutional racism as a special form of stress may now be a major factor explaining this dramatic deterioration in the health of people of color, according to authors David Williams, Michael Spencer, and James Jackson in their study “Race, Stress and Physical Health.”

What remains to be determined is whether the unmistakable pattern of institutional racism experienced by children of color in our ghetto school districts can be linked to the host of illnesses they are beginning to manifest even at an early age. If it can, then the new quest for equal educational opportunity may be based on the right of our children to be free from the institutional racism of imposed educational isolation.

While Brown began with a focus on issues of self-image in black children 50 years ago, now there is a clear relationship between race, poverty and poorly performing inner-city school districts well beyond the psychological factors. These communities also suffer numerous forms of stress, especially institutional racism that created these closed zones of poverty. This is structural racism, not formal legal discrimination but racism across institutions. And we now better understand the link between that form of racism and the clear measurable physical harm that it causes. In 1954 we called that harm the denial of equal protection under the law. At Brown’s next anniversary the struggle for equality just might be targeted at educational racism, our national public health crisis.

Victor Goode is a professor at City University of New York Law School. This article is excerpted from the original which appears at colorlines.com.