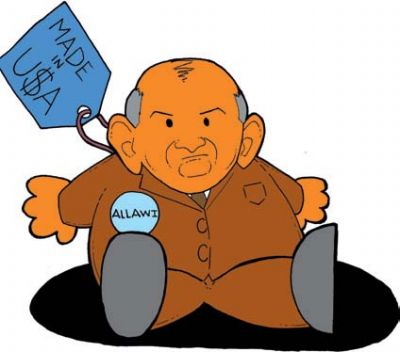 Having opened the gates of hell in Iraq, the Bush Administration is diving right in. White House and Pentagon officials say they plan to reconquer rebel towns in the “Sunni Triangle” following the U.S. election.

The timing is integral to the Bush-Cheney campaign strategy. The White House is planning to besiege Iraqi cities after the presidential vote so as not to have its message of an “improving Iraq” marred by images of massive civilian and military casualties.

Dexter Filkins wrote in the New York Times Sept. 19, “A senior American commander said the military intended to take back Fallujah and other rebel areas … as early as November or December, the deadline the Americans have given themselves for restoring Iraqi government control across the country.”

The deadline is to allow time to organize Iraqi elections in January for a transitional national assembly. Iraq’s elections, and similar ones in Afghanistan slated for Oct. 9, are central to promoting Bush’s campaign message: Iraq is part of the war on terror, everything is improving there, increasing attacks are a sign of the insurgents’ desperation, and we are winning .

In Afghanistan, however, more than 30 election workers have been killed, the 18 presidential candidates can’t campaign outside of Kabul because of a lack of security (President Harmid Karzai was forced to abandon his only campaign rally to date after a rocket narrowly missed his helicopter in the town of Gardez), and anti-U.S. forces are intimidating voter educators. Says one provincial election coordinator, “We have no newspapers, no local radio, so we depend on our teams of civic educators. And they are scared.”

Karzai is favored heavily to win whatever quasielection ensues, allowing Bush to make a surprise visit to Kabul in October to congratulate the Afghan president on winning re-election. Another sign of progress.

To prepare for Iraq’s elections, the Pentagon plans to soften up the Sunni Arab electorate with bombing (Fallujah is already being bombed daily). Former Bill Clinton adviser Sidney Blumenthal spoke with an ex-Marine Corps commandant who predicts that the Bush administration will “flatten” Fallujah “after the first Tuesday in November.” In The Guardian on Sept. 16, Blumenthal quotes retired Gen. Joseph Hoare, who explains, “U.S. military forces would prevail, casualties would be high, there would be inconclusive results with respect to the bad guys, their leadership would escape, and civilians would be caught in the middle.”

The model may very well be the Iraqi city of Tal Afar. Saying they were flushing out “foreign terrorists,” U.S. forces encircled the city in early September, turned off electricity and water for days, and bombed residential areas. At least 55 people were killed, many of them civilians, according to the city hospital. A humanitarian crisis ensued as 150,000 people – most of Tal Afar – fled the bombardment.

Yet the U.S. attack is scheduled to begin at the same time voter registration commences in 600 offices throughout Iraq for an estimated 12 million potential voters. The Times reports that registration will start Nov. 1 and last for six weeks, “requiring thousands of police officers and possibly troops to protect them.” The aim is to restore “Iraqi government control,” but Iraq’s security forces exist only on paper. During the siege of Tal Afar, according to the Washington Post, more than 500 Iraqi police fled or joined the resistance. Only 83 took part in the assault, receiving a one-month bonus of $200 each from a U.S. Army colonel.

With the resistance targeting collaborators, finding thousands of Iraqi civilians to staff the registration offices will be almost impossible. At least 45 Iraqi translators have been killed in Baghdad alone since the beginning of 2004. No one is safe, from drivers to clothes washers to carpenters. Iraq’s own election commission has adopted a “deliberate low profile” out of fear, according to a U.N. report, thus hampering public outreach.

The United Nations is supposed to provide key support, but it “has been unable to field more than a skeleton staff in Baghdad out of fears for the staff members’ safety,” according to the Baltimore Sun. Also skipping town is the British Army. The London Observer states, “The main British combat force in Iraq, about 5,000-strong, will be reduced by around a third by the end of October,” just as the planned U.S. assault is about to begin.

U.S. forces and their Iraqi allies are already spinning a limited election as a legitimate one. Prime Minister Ayad Allawi has said that towns such as Fallujah could be bypassed in the vote. The Bush Administration is suggesting that limiting the vote to 18 cities may be sufficient. Filkins states in the Times, “At a minimum, the American commander said, local conditions would have to be secure for voting to take place in the country’s 18 provincial capitals for the election to be considered legitimate.”

The Association of Muslim Scholars, a body of clerics representing 3,000 Sunni mosques in Iraq, has come out against the election. One leader said, “As long as we are under military occupation, honest elections are impossible.”

Iraq’s elections are intimately connected to the U.S. election. Allawi recently visited the U.S. to promote the Bush campaign message. Echoing his benefactors, Allawi told ABC News that the intensity of resistance attacks, which totaled 2,700 in August and wounded some 1,100 GIs, shows that insurgents are making a “last stand, so they are putting a very severe fight on Iraq. We are winning.”

When Bush and Allawi say the war has made America safer, they are right, in a perverse sense. Middle East fanatics no longer need to try penetrating fortress America in the hopes of killing infidels when more than 150,000 Americans are available for target practice in Iraq.

The insurgency is mostly homegrown, created by the occupation itself and dire economic circumstances, and motivated by nationalism and religion. But the Iraq war is also becoming a pan-Arab and Muslim battle, fed by satellite television images of Iraqis blown apart, incinerated and gunned down during the last 18 months. Colin Freeman, a freelance reporter in Iraq, says the country has become a “magnet for extremists and terrorists, not just from the Middle East but as far away as central Africa.”

Nir Rosen, one of the few Western journalists who has ventured into rebel-held Fallujah, reported in July on video discs for sale that feature, “Young foreign fighters from Saudi Arabia and other countries… giving testimonies before going out on suicide operations.”

Last year, the Pentagon put the number of insurgents in Iraq at 5,000, never changing the number even as it issued press releases claiming to have killed hundreds and arrested thousands of rebels. Now it has upped the figure to 20,000. But one military analyst puts the number of Sunni insurgents alone at 100,000.

There is increasing coordination between the Iraqi resistance and internationalists. As the resistance has shifted from hit-and-run tactics of improvised explosive devices and mortar attacks to standing and fighting in complex ambushes, suicide bombers are now being used against U.S. military convoys, not just stationary targets.

These attacks are filmed, the footage then used in popular homemade videos that serve as recruiting devices for the resistance throughout the region. Rosen sampled the Fallujah cinema, which “depicted various operations conducted by the resistance, primarily against U.S. military targets, as well as various crimes of the occupation, destroyed homes, abusing prisoners, and a lot of bloody dead people accompanied by mournful chanting Islamic music.”

Come January, there will be plenty of new recruiting videos if the Pentagon has its way. Even if Iraq’s elections occur, many Iraqis will likely dismiss them as illegitimate, intensifying the resistance. A second Bush Administration promises years of grinding and spreading warfare in the Middle East. Saudi Arabia has its own simmering rebellion, and the neocons in power want to bomb Syria or Iran next.

More ominous, in these 21st century conflicts, the resistance eventually takes the war to the occupying country, as Israelis and Russians can attest. Republicans would probably welcome another horrific attack on U.S. soil. It is all they need to eliminate civil liberties and social services, and fully impose their authoritarian and reactionary agenda.