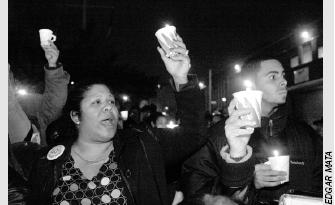 Hundreds of demonstrators assembled at the Grand Street Waterfront Park in Williamsburg on Nov. 18 to rally for affordable housing in the North Brooklyn area. The demonstration was held both in response to massive displacement of long-term residents of the area due to an influx of wealthier tenants from Manhattan, and also to the city’s proposed rezoning of the industrial waterfront area of Williamsburg-Greenpoint. Demanding that no less than 40 percent of housing resulting from the planned rezoning be affordable to long-term residents, demonstrators marched from the rally and fanned out all along the waterfront for a candlelight vigil.