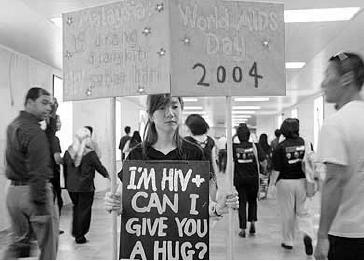 (below, left to right): An Indian HIV-positive female sex worker stands before a large banner featuring a large red ribbon, the internationally-known symbol of AIDS prevention, as she takes part in a silent march, in Madras:

A man dressed as a condom hands out leaflets on a street in Hong Kong on World Aids Day. The condom man was from a local group called “International Action” and was protesting about the lack of quality sex education in local schools in Hong Kong;

People lay on the ground as they participate in a rally to mark World AIDS Day in Washington, DC.