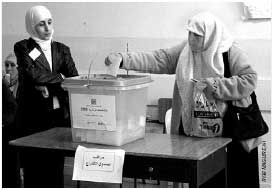 Once again, the media and the international peace process industry have declared that it is an “historic day” for the Palestinian people. The occasion this time is the election of Mahmoud Abbas as head of the Palestinian Authority in the occupied territories. Yet most of these Palestinian people, for whom this day has been declared historic, do not live in the occupied territories; the majority of Palestinians live in diaspora or as refugees outside their homeland, a direct result of the ethnic cleansing which created Israel in 1947-48, and of the occupation of the remainder of Palestine in 1967.

For Palestinians in the diaspora, such historic days feel like everyone is having a party that is supposed to be in your honor, except that no one invited you, or perhaps it is like watching a television movie of your life that bears little resemblance to reality. The feeling I have now is exactly what I felt on that other big historic day, Sept. 13, 1993, when the Oslo Accords were signed in Washington by a beaming Yasir Arafat and the recalcitrant Israeli prime minister Yitzhak Rabin, under the beatific gaze of President Bill Clinton. I feel a mixture of exasperation, hopelessness and determination.

For days now, I have done hours of talk radio about the elections, trying to explain as best as I can why replacing Yasser Arafat with Mahmoud Abbas will not lead to peace, why Palestinians aren’t ecstatic, how the Israeli occupation makes democracy impossible. But for the most part, the script has been written and Palestinians are only called upon to read their lines. So the TV and newspapers are full of happy Palestinian voters who debate only whether Abu Mazen (Mahmoud Abbas) or Mustafa Barghouti is right for them. Herds of international observers are on hand to certify that a few irregularities notwithstanding, this was a model election of which Palestinians can be proud.

Senator John Sununu, who was part of the U.S. observer delegation read from the official script: “It’s a democratic election in the Arab world, and that in itself is somewhat historic,” the New York Times quoted him as saying. Sununu added that the Palestinian leadership will now have “a new level of credibility to talk to the Israelis and impose reform and reorganization of the security forces, so there’s a reason to be optimistic.”

In the ghost-written screenplay that the Palestinians are being forced to act out, the election is “good news.” This means that any information that interferes with this agreed narrative – that we are at the cusp of a new era of peace, democracy and reform – has to be carefully filtered out.

In order to maintain this fiction, other crucial facts must be routinely screened from public view. While the peace process scriptwriters insist that Mahmoud Abbas can bring peace where Arafat failed, the Israelis at least know better.

So in the long-running Palestine soap opera, Abbas, the understudy who has been hired to replace the deceased lead actor Arafat, is being offered the choice of two roles by the Israeli-American scriptwriters. He can play the obedient native administrator of a defeated people who gets to wear a suit and call himself president of a fictional state, or he can don Arafat’s kaffiyeh and assume the role of the Palestinians’ unreformed “terrorist” leader.

As with in all soap operas, repetitiveness and increasingly absurd plot twists eventually wear out even the most faithful audience. And when this episode is over, the Palestinian people will still be there, steadfastly, patiently, determined to regain their usurped rights and see justice done, come what may.

For the full report: electronicintifada.org