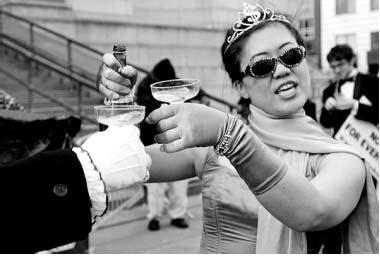 Is there room for street-level theater in the fight against Social Security privatization? Billionaires for Bush are going to try it on Jan. 20 – Bush Reinauguration Day – when they “auction off” Social Security. Time: 10 a.m. Place: the Franklin D. Roosevelt Monument, Ohio Drive SW between the Lincoln and Jefferson memorials, Washington, D.C.

Privatization has been a live conservative cause for 10 years. But activists fighting to preserve the traditional program have concentrated on lobbying Congress; writing research reports, books, and op-eds; and confronting privatizers at public forums and on the campaign trail. The Billionaires think some brazen satire is really needed.

“We’re reframers,” says “Ivan Tital,” chapter leader of the DC Billionaires. “Democrats lose debates because the Republicans spend a lot of time getting their message right and getting it out first. We’re going to counter that.” For instance, the term “privatize” tests too well in surveys, so the Billionaires talk instead about “corporatizing” the program in their mock campaign – “champagne,” actually – for the Bush plan, which kicks off with the Jan. 20 “auction.”

At the Billionaires’ national convergence in Washington the two days after the inaugural, one order of business will be to plan a long-term national mobilization around Social Security. Possibilities include more street action, aiming messages at Democratic “wobblies” in Congress who the Republicans might pressure to support the President, and even producing ads, direct mail, or a phone bank “champagne” in favor of corporatized Social Security. “We want to make headlines, forcing the story to be about the other side’s weaknesses,” says “Ivan Tital.”

To get the word out, he says the Billionaires are hoping to partner with a union or nonprofit that’s already working against the Republican agenda. —E.L.