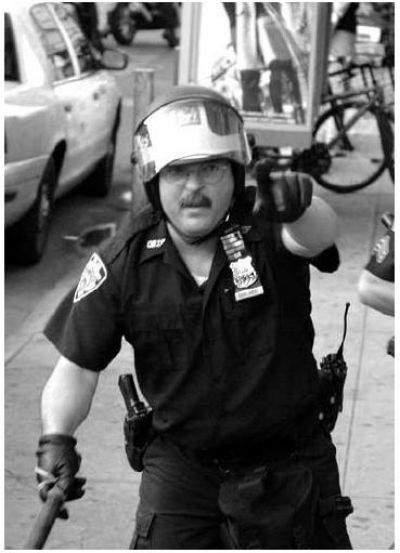 A NYPD officer during the RNC. The NYPD made multiple massive arrests that don’t stand up in court. PHOTO: STANLEY W. ROGOUSKI

In the first jury trial stemming from the mass arrests at the 2004 Republican National Convention in New York City, video and photographic evidence have shown some police testimony to be fabrications.

Judge Gerald Harris granted a motion to dismiss all charges against Dennis Kyne on Dec. 16, 2004, after the defendant’s attorneys produced evidence contradicting statements that police officer Matthew Wohl made under oath.

Kyne was among several people arrested at the New York City Public Library on Aug. 31 during the RNC. Kyne originally faced a total of seven charges, including riot in the second degree, resisting arrest, and obstructing governmental administration. The riot charge was dropped before trial.

The motion to dismiss came not from the defense attorneys, but from New York County District Attorney Robert Morgenthau. Morgenthau’s office brought the motion for dismissal after Wohl testified and the defense played a videotape for the prosecutors. Sources now say that the district attorney’s office has launched an official investigation into the matter.

During the trial, Wohl asserted that he was present at the library as part of a mobile response team during the RNC. Wohl claimed he had seen Kyne yelling in a “boisterous” manner. On Sept. 1, Wohl also signed an accusatory instrument alleging that Kyne had shouted: “Look what they are doing. The government is taking away our rights. They lied to you; they lied to me.” The document also asserted that Kyne yelled in a “violent and tumultuous manner.”

Wohl testified that he personally arrested Kyne and that Kyne was “screaming, yelling, and moving around” during the arrest. Wohl claimed that Kyne dropped to the ground and that four officers (including Wohl) had to pick him up and carry him while Kyne “squirmed and screamed.” Asked explicitly how Kyne had resisted arrest, Wohl stated that Kyne’s “mouth, heart, and eyes” moved while he lunged around.

But videotapes and photographs of the events showed Kyne walking away from the library until two other officers grabbed him, forced him onto his knees, then applied plastic cuffs. None of the officers in the videotape or photographs is Wohl. Another officer in a white shirt then approaches and tells the arresting officers to charge Kyne with “Dis con [disorderly conduct] and resisting.” During this process, Kyne is saying, “I’m not resisting.” None of the events described by Officer Wohl are recorded; it appears that Wohl was not present and did not participate in the arrest.

Wohl also testified that he arrested four other people at the library, but in several of those cases the defendants insist Wohl was not the arresting officer. The evidence proving Wohl’s testimony was false in Kyne’s case also raises questions about the legitimacy of the other cases involving Wohl. It is currently unclear how many total arrests Wohl is credited with during the RNC.

Kyne’s attorneys expressed concern that Wohl’s testimony may be part of a larger pattern. Attorneys Lewis Oliver and Gideon Oliver mentioned the possibility that police had used massive sweeps to round up large groups of people during the RNC, and then relied on officers like Wohl (who were not necessarily actually involved in the arrests) to provide testimony intended to legitimize the arrests. Wohl testified under oath that in preparation for the RNC he and other NYPD officers received extensive, convention-specific training throughout the year.

To obtain videotape and photographic evidence, Kyne’s attorneys searched the large body of evidence collected by the National Lawyers Guild, which is involved in several lawsuits stemming from the arrests and detentions during the RNC. A Florida photographer snapped several images of the events at the library, and a videographer recorded the entirety of Kyne’s arrest.

Sources familiar with the case have confirmed that the DA’s office is investigating Wohl’s role in the Kyne case and in the other arrests at the library on Aug. 31. Cherry Hunter, spokesperson for the Manhattan District Attorney’s Office, said that she could not comment on the existence of any such ongoing investigation. Hunter also could not comment on whether there are any plans to pursue perjury charges against Wohl. At this time no charges have been filed.