I wanted to work as a professional dom when I moved to New York a few years ago. So I found an ad in the paper, answered it, and went in for an interview. They asked me if I could do wrestling sessions. I’d do anything, I didn’t really care, and so they started promoting me right away as a star wrestler. I had no wrestling training whatsoever. I’d had previous experience with self-defense and martial arts, but they’re a lot different from actually wrestling someone. I applied what I knew about basic body mechanics, and I ended up doing really well. 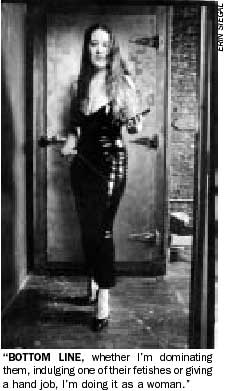 At my dungeon, there was fantasy wrestling, semi-competitive and competitive wrestling. Fantasy is just putting people in holds, and they don’t fight back at all. They think of some kind of fantasy, like I’m some jealous ex-girlfriend whose been cheated on, enacting my revenge, or I was a prisoner who lured a guard into my cell and assaulted him once he was inside. The person is fetishizing your muscles and your strength. Some of them role play Superwoman fantasies – superheroes, Catwoman, roles like that. A lot of the men I saw had the simple fantasy of me, a woman, just being indomitable, Amazonian almost. I felt really comfortable playing that role. This was my entrance into life as a dominatrix. I had wanted to do work that was life-affirming and fun, and where I made money. I was either going to do dom work or peepshow work, and in post-Giuliani New York there weren’t many peepshows still around.

Much of the time it had nothing to do with role-playing, it was more muscle worship, just me being this really strong, overpowering woman. They want to be punched, struck, and of course they want ball-busting, which is basically getting kneed in the groin, repeatedly.

Then there’s semi-competitive wrestling, where they’re actually allowed to wrestle back, but they let you win. In competitive wrestling, you actually wrestle each other. That always had a very different vibe to me – the whole energy was very masculine. It always reminded me of my older brothers, because it’s like you’re testing, tussling. It was kind of humiliating for me to do competitive wrestling sessions. I don’t do them anymore. Most of the time I won, but when I didn’t, I didn’t like it at all.

Most of the men I see are white, middle class types – but not exclusively. Different people tend to attract different kinds of customers. My big thing was being a female supremacist, a genuine article, like you couldn’t get any more female supremacist than me. If they wanted a genuinely dominant lady, that’s me. That was my angle. I went from being a lesbian separatist to doing sex work. It was all about gender and performance, it was just fascinating. Bottom line, whether I’m dominating them, indulging one of their fetishes or giving a hand job, I’m doing it as a woman, and they’re perceiving it as a man. There are all these aspects of virility, power, and prestige, and no one else knows about it. In his psyche, that’s what’s going on for him. He’s paying you to create this space for masculinity within his own self. It’s fascinating to me.

What happened with working as a dom is that it was all very underground until the Internet came along. Now, it’s much more socially acceptable, and doms have to do more hands-on work and things they maybe aren’t as comfortable doing just to make the same amount of money as before. The whole industry has become a lot more competitive. All of a sudden, people who thought they were the only ones in the world with a bizarre fetish realize that there are lots of other people out there too, and plenty of people who will play with you. Before, clients had the illusion that they were the only sick bastards in the universe who had this fantasy and needed to find the one woman who’d indulge them, and pay her lots of money. And now, there’s much more of a market with more girls who will indulge them for less money.