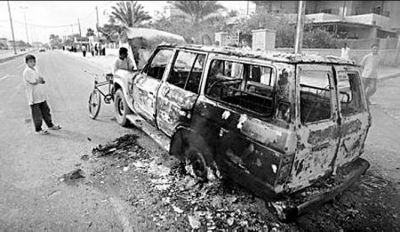 ROAD RAGE: An uncounted number of Iraqis have been killed at poorly identified U.S. checkpoints throughout the country. This is the aftermath of a typical encounter after the vehicle allegedly “failed to stop.”

While much media attention has been focused on the torture at Abu Ghraib, two other strings of questionable killings by U.S. soldiers have been largely ignored by the American media and not a single soldier has faced any disciplinary action for the deaths. Since the beginning of the invasion in March 2003, the U.S. military has killed more than a dozen journalists in Iraq – more than the Iraqi resistance has. There have also been scores of civilians killed – including women, children and families – at US military checkpoints across the country. Yet not a single soldier has been charged or disciplined in any of these cases, and the internal investigations have become a conveyor belt for exonerations.

The recent killing of an Italian intelligence official and the wounding of an Italian journalist by U.S. forces in Baghdad highlights how out of control the climate of impunity has become. It should serve as a wake-up call to the dangerous reality faced daily by thousands of Iraqis and by unembedded journalists.

On March 4, the car taking newly released hostage Giuliana Sgrena, a veteran war correspondent for Il Manifesto, was heading to the Baghdad airport. “We thought we were finally safe, because the area where we were was under the control of the United States,” recalls Sgrena. “But then suddenly we found ourselves under an immense amount of bullets, something terrible, without any warning, and we realized that nearby there was an American tank which was shooting at us.”

Sgrena was wounded in the attack. Nicola Calipari, the Italian secret service official escorting her, was shot dead. And he wasn’t just any agent. Calipari was the international operations chief of Italy’s military intelligence service. In a vivid account in Il Manifesto, Sgrena wrote, “I heard [Calipari’s] last breath as he died on top of me.” The other Italian agent in the car was forced to kneel in the road until U.S. troops could identify him.

The U.S. has characterized the shooting as an “horrific accident” and has promised a full investigation. But the administration and the military have also laid blame on the Italians, saying they failed to slow down at a U.S. checkpoint after repeated warnings. Further, they say the Italians did not provide adequate information on Calipari’s mission or their travel route.

The Italian government, a close ally of the Bush Administration, disputes this. According to Italy’s Foreign Minister, Calipari arrived in Baghdad that Friday, after making contact with the kidnappers. Calipari and a fellow agent checked in with U.S. authorities at the airport, as well as the forces patrolling the area. The agents had been given security badges by the U.S. to allow them to travel freely in the country. After picking up Sgrena from the abandoned vehicle where her kidnappers left her, they drove slowly to the airport, keeping the car lights on to help identify themselves at U.S. checkpoints. News of Sgrena’s release was already on the Reuters newswire and on al Jazeera. The mood in the car was one of celebration – until the vehicle came under intense gunfire.

The checkpoint where Calipari was killed had been set up for the trip of U.S. Ambassador John Negroponte to a dinner that night with Gen. George Casey, commander of U.S. forces in Iraq. To provide security, U.S. soldiers established “mobile checkpoints” – clusters of Humvees armed with .50-caliber machine guns on top. It was one of these details that opened fire on the Italians’ vehicle.

Shootings like this happen almost everyday in Iraq. The Sgrena case happens to be receiving media attention because of who was killed. But it indicates the degree to which Iraqis are subject to violence by U.S. forces. Their deaths and injuries go uncounted at numerous checkpoints. The occupation has been rife with these questionable checkpoint shootings, explained away by the military with variations of the same – mantra “failed to slow down,” “failed to stop” or “failed to respond to signals.” The Pentagon has not admitted culpability in any such deaths.

Nor has the U.S. punished a single soldier responsible for killing journalists in Iraq. “We have had three deaths, and they were all non-embedded, non-coalition nationals and they were all at the hands of the U.S. military, and the reaction of the U.S. authorities in each case was that they were somehow justified,” says David Schlesinger, Reuters‘ global managing editor. “What is the U.S.’s position on non-embeds? Are non-embedded journalists fair game?” One of the BBC’s top news anchors, Nik Gowing, said recently that he was “speak[ing] for a large number of news organizations, many of whom are not really talking publicly about this at the moment,” when he made this statement about the dangers facing reporters in Iraq: “The trouble is that a lot of the military – particularly the American…military – do not want us there. And they make it very uncomfortable for us to work. And I think that this…is leading to security forces in some instances feeling it is legitimate to target us with deadly force and with impunity.”

While some killings of journalists are classified by the military as “ongoing investigation[s],” most have been labeled self-defense or mistakes. Some are even classified as “justified.”

There is a common thread in many cases: the journalists, mostly Arabs, were reporting on places or incidents that the military may not have wanted the world to see — military vehicles in flames, helicopters shot down, fierce resistance against the “liberation” forces or civilian deaths.

The military has refused to adequately investigate these killings and put an end to the climate of impunity. It is time to conduct a full investigation into the military’s treatment of journalists and other noncombatants in Iraq with a focus on the killing of Iraqi civilians and unembedded journalists. Every one of the checkpoint killings in Iraq should be heavily scrutinized. The soldiers involved should be interviewed by independent investigators, and witnesses should be deposed. Killers must be held accountable, especially those in uniform.