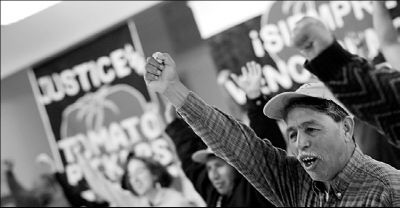 WE WIN: The coalition of Immokalee workers and its supporters celebrate a March 8 announcement that fast food giant Taco Bell had agreed to their demands for a pay increase. PHOTO: JACQUES-JEAN TIZIOU/JJTIZIOU.NET

The Coalition of Immokalee Workers (CIW) had planned to cap off their 2005 labor rights Taco Bell Truth Tour with a conference on global justice and a mass convergence in Louisville, Kentucky at the headquarters of Yum! Brands, the fastfood chain’s parent company. However on March 8, Taco Bell and workers negotiated a precedent-setting agreement on labor conditions that turned the protest into a party and the conference into a discussion of what the coalition’s next steps should be.

Aboard the bus back to Florida, coalition spokesperson Lucas Benitez told The Indypendent, “For those who pick tomatoes for Taco Bell, it is an immediate economic change. In a larger sense, it is a hopeful change for all workers, because we’ve committed to seeking out others to help improve conditions for all farmworkers. We will continue working with Taco Bell to motivate others in the fast-food industry to follow Taco Bell’s leadership.”

The agreement has been hailed as having wide-ranging implications not only for the fast-food industry but for grassroots organizing in general also. It was reached amid intense pressure built up over several years, culminating in the week-long sojourn. The road trip tour kicked off on February 28 in Immokalee, Florida, and finished in Louisville on March 5. They also parked the bus in Atlanta, Montgomery, Nashville, Memphis, Cincinnati, Cleveland, Chicago, and stopped in other cities on a nine-state tour.

Taco Bell has agreed to pay the penny-perpound surcharge on picked tomatoes demanded by the farmworkers, and to work with the CIW to raise working conditions throughout the supply chain and across the industry as a whole. In return, the Immokalee workers ended their four-year national boycott of Taco Bell, which gained wide-ranging support from churches, unions, and universities across the country, as well as high-profile endorsements, ranging from actors Martin Sheen and Susan Sarandon to former President Jimmy Carter and AFLCIO head John Sweeney.

Adding a penny per pound of tomatoes picked may not seem like much, but it adds up. The approximately 1,000 workers employed by Taco Bell’s tomato suppliers, who now make 40-45 cents for each 32-pound bucket they harvest, will earn at least 72 cents for that quantity-a 60 to 80 percent increase, which means approximately $20 more per day for the farmworkers. Currently, these workers earn about $7,500 a year, without health insurance or paid vacations. According to Benitez, this agreement “would mean almost reaching the poverty level.”

The one-cent-per-pound “pass-through” funded by Yum! Brands, the parent company of Taco Bell, will be funneled directly to the workers through a small number of tomato suppliers. As reported by the Tallahassee Democrat, Yum! spokesman Jonathan Blum said the company will eat the added cost and that it will not be passed on to Taco Bell’s customers. He also stated that Taco Bell would only work with suppliers that comply with the agreement, which does not pertain to Yum’s other fast-food chains, KFC, Pizza Hut, Long John Silver’s and A&W All-American Food Restaurants.

In addition to the pay increase, the agreement also includes a code of conduct for Taco Bell’s suppliers. The code explicitly bans indentured labor – transporting workers to Florida and then forcing them to work off that cost – which, while already illegal, does occur. Yum! Brands has pledged its commitment to monitoring its suppliers for compliance with this standard and with all other existing labor laws. The agreement also sets up a process by which workers can file complaints about payment or treatment. Grievances will be jointly investigated by the workers coalition and management at Yum! Brands. The company also agreed to help the coalition establish a strategy to lobby the Florida Legislature for laws requiring better working conditions throughout the industry.