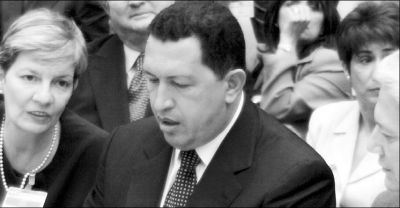 In recent months, Venezuelan President Hugo Chavez has begun to explicitly advocate for socialism, marking a significant development for both the Bolivarian Revolution in that country and for the broader international movement.

There is no doubt that the U.S. government understands the significance of an oil-rich country with a radical, anti-imperialist government, which has received repeated, indisputable democratic mandates, advocating for socialism. Simply put, the government in Caracas poses the gravest “threat of a good example” since the Cuban Revolution of 1959. As if taunting Uncle Sam for its historic failure to destroy and isolate Cuba completely, Chavez now flaunts his close friendship with Fidel Castro, inviting thousands of Cuban doctors to Venezuela, and sending oil at preferential prices to the energy-starved Caribbean island.

Little surprise that, with a newly emboldened government and a demoralized opposition, there have been repeated warnings of plots to assassinate Chavez. He addressed the situation with a threat of his own, announcing on his Alo Presidente radio show that “the Venezuelan people will stop even one drop of oil from going to the U.S. if there is any attempt made on my life.”

While flexing oil muscle in an effort to dissuade U.S. efforts to eliminate him, Chavez remained on the offensive: “I am convinced, and I think that this conviction will be for the rest of my life, that the path to a new, better and possible world, is not capitalism, the path is socialism.”

The global movement for social justice must take seriously the continuing threats against the Bolivarian process in Venezuela. But more than just defending Venezuela’s right to self-determination, though, progressives should also take up the challenge to “reinvent” socialism.

The movement against corporate globalization has, rather proudly, avoided projecting any specific solutions to the ills of capitalism, eschewing the left’s classic “meta-narrative,” that capitalism would inevitably be replaced by socialism and communism on a world scale. Political pluralism became a watchword for the World Social Forum and its leading convenors; certainly this could be understood as a healthy and understandable reaction to the evils perpetrated in the name of socialism throughout the 20th century.

But while Kampuchea’s killing fields, the Soviet Union’s gulags, and the repugnant bureaucratic privileges and internecine murders sullied the image of socialism, so too has social democracy – from the chauvinist betrayal marked by support for the carnage of World War I right up to Tony Blair’s imperial adventure in Iraq.

This record of failure has left the right triumphant. Buoyed by the fall of the Berlin Wall and “actually existing socialism,” the right has been on the offensive over the past 15 years, aggressively implementing neo-liberal “reforms” globally, either through the WTO and economic blackmail, or through cruise missiles and “regime change.” So the Bolivarian Revolution, together with other vibrant social movements in Latin America and global resistance to war and occupation in the Middle East, represents a welcome and overdue challenge to Empire.

At this year’s World Social Forum in Porto Alegre, Chavez was unquestionably the most popular figure, his presence revealing deepseated resentment of the moderate approach and collaboration that Brazil’s Lula is taking with IMF dictates.

Chavez, in fact, had to intervene to quell a packed stadium’s chants of “Chavez si, Lula no!” Before that same crowd, the Venezuelan leader made his most overt ideological statement to date: “We must reclaim socialism as a thesis, a project and a path, but a new type of socialism, a humanist one, which puts humans and not machines or the state ahead of everything. That’s the debate we must promote around the world, and the WSF is a good place to do it.”

Let’s hope this call is heeded, and that the debate begins in earnest. Defeating U.S. imperialism and developing viable alternatives to neo-liberalism depends on us meeting this key challenge for the 21st century.

Adapted from an article that originally appeared in sevenoaksmag.com.