A 30-foot tripod erected in front of the Forest Service’s regional headquarters brought mid-day traffic in downtown Portland to a halt on March 30. The apparatus suspended a pod 20 feet above Second Avenue bearing an activist named “Pax,” and a banner reading, “Burned Forests Are Alive–Stop Biscuit Logging.” This direct action by Stumptown Earth First! was the latest confrontation in an intense few weeks that have seen 49 arrests in the two-year battle to save the trees of southern Oregon’s Siskiyou National Forest. 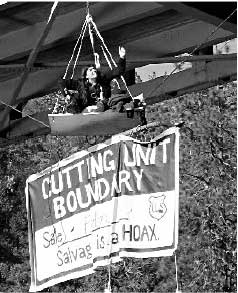 During the Biscuit Fire of 2002 approximately 500,000 acres of the Wild Siskiyou River area burned to varying degrees. Though Forest Service scientists stated that the fire was beneficial to the overall health of the forest, the Bush administration responded with the so-called “Biscuit Fire Recovery Project,” a plan to cut down 20,000 acres of trees – the largest single logging project in Forest Service history. This includes approximately 9,000 acres of late-successional reserve (LSR), or old-growth trees previously safeguarded by the 1994 Northwest Forest Plan. The project is based on two premises: that it’s simply a salvage operation to cut down dead trees, and that removing the burned trees will help prevent future fires. Activists contend that fires are a necessary part of the life cycle of a forest, that many trees are burned but not dead, that even dead trees serve important functions, and that logging will make fires more likely, by removing relatively fire-proof older trees and leaving easily combustible branches and younger trees behind.

As Laura, a member of Wild Siskiyou Action, told The Indypendent, using “salvage” as an excuse, this project is the first to threaten the inventoried roadless areas, land that had been protected by the Roadless Rule enacted during the final months of the Clinton administration. In order to “salvage” the trees within the 13 square miles of roadless areas included in the Biscuit timber sale, the Forest Service must build access roads within the area. As a result the area will no longer be roadless and, by definition, no longer protected by the Roadless Rule.

Two lawsuits questioning the legality of this timber sale are underway. The first, filed by the Siskiyou Project, the Sierra Club and others, argues that the project violates the National Forest Plan and the Roadless Rule. The second, brought by the Cascadia Wildland Project, National Forest Protection Alliance, Native Forest Network, and Klamath Forest Alliance, charges that logging protocols have been violated and pertains to the entire Biscuit region, not just the old-growth areas. The Ninth Circuit Court of Appeals denied a request for a temporary restraining order on March 25; the plaintiffs are now seeking a preliminary injunction to halt logging until the trial begins.

In the meantime, logging continues. John West of the Silver Creek Timber Company said he hoped to have half the trees on the ground before the end of March. Since the Fiddler Mountain timber sale began on March 7, activists affiliated with Wild Siskiyou Action, the Oxygen Collective and other groups have staged numerous rallies, roadblocks and tree sits that have blocked logging trucks for several hours at a time. As Laura of Wild Siskiyou Action explained, these disruptions make the timber sale substantially more expensive for the Forest Service and the logging companies. She claims that some loggers are already refusing to work in areas where there have been protests.

To reinforce their own skills and to bring in new faces and ideas, Wild Siskiyou Action held a skillshare camp from April 1-8. The camp featured workshops on non-violent philosophy and direct action, rope climbing, road blockades and more, and culminated in a direct action.

And they are already looking beyond the Fiddler Mountain sale. “Beyond Fiddler, there are five other LSR timber sales that could be logged,” Laura explained. “I was just out on the coast, hiking those sales, and there hasn’t been any activity yet, but we’re keeping an eye on that. If they start going into those other sales, we’re going to be there.”