What turns senior citizens into irate foul-mouthed spectators and brings armies of homeless folks out from shelters? A Rent Guidelines Board vote to raise rents, of course. Tenants and homeless advocates maintained the tradition of theatrical RGB meetings at a May 3 preliminary vote on the rent increases for 2005-06. A rowdy crowd of about 200 people held signs and shouted slogans as the board passed Chairman Marvin Markus’s proposed range of rent increases of between 2 and 4.5 percent for a one-year lease renewal and from 4 to 7 percent for two years.

The vote was 5 – 4, with the board’s Bloomberg-picked public members all supporting the preliminary guidelines and both the landlord and tenant representatives voting no. At Cooper Union on June 21, the RGB will set the final guidelines, affecting millions of tenants in the city’s rent-stabilized apartments who renew their leases in the year beginning Oct. 1.

Markus plowed through a blizzard of obscenities and chants of “rent freeze now” with rapid monotone legalese. He only stopped to bang his gavel and reprimand the most surly of protesters, including a middle-aged man with a stringy Afro clad in a fine suit who urged tenants to storm the stage where the board held court. When the man failed to start a march in one aisle, he raced over to another, lurching into rows of indignant tenants to rouse them into militant action. One person was arrested and charged with disorderly conduct after he refused to sit down. 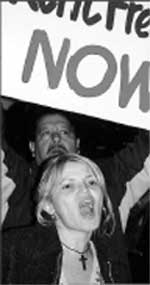 After Markus spoke, RGB landlord representative Harold Lubell pleaded the case that landlords’ expenses were rising and they need hefty rent increases. “Let’s try to listen to some of those facts, it’s for your benefit and the board’s benefit,” said Lubell. “We’re not a welfare agency!”

“Don’t speak to us like we’re animals!” Lisa Burriss, an observer, shouted back.

In the midst of the racket, a young child crawled into the aisle pursuing an errant matchbox car. His mother scooped him up and sat him in her lap as an older man a couple rows down belted to the board, “Show us your tax returns, you goddamn crooks.”

As the shouting reached a crescendo, both Lubell and Markus approached tenant representative Adriene Holder and emphatically poked their fingers at her in an apparent plea for her to control her constituency. Lubell’s proposal, for increases of 6 and 9 percent and a revival of the “poor tax” surcharge on low-rent apartments, was voted down 7-2.

The two tenant representatives, Holder and David Pagan, proposed a two-year rent freeze and jeers turned to cheers. “This year, it needs to be about tenants and affordability. Enough is enough,” said Holder, noting that one-third of New York City renters pay at least half their income for housing. As usual, it was summarily voted down 7-2 as well.

“It’s terrible, we’re just going through the same thing as last year and nothing has changed,” said Madelin Camporeate, a member of Tenants and Neighbors.

Markus, whom tenants often call “Marvin Markup,” then proposed a “compromise,” a range of possible increases stretching from somewhat less to slightly more than last year’s guidelines of 3.5 and 6.5 percent. The board approved it without debate and then took a recess.

The crowd calmed itself by milling around and socializing in the lobby. Older Jewish women in brightly colored hats that read “stronger rent laws now” mixed easily with younger African-Americans and homeless people.

“Excuse the nasal piece,” said longtime East Side Tenants’ Coalition activist Dawn Sullivan, who breathes with the aid of an oxygen tank. “We have so many people who can’t keep up with these increases. Even people in the arts can’t come here anymore.”

As the crowd left the building, a group of gender-bending drag queens was throwing a party and photo exhibition in another lobby. “Give me a five, honey,” fandango attendee Giorgio Handman, clad in a fedora and suspenders, called to the tenants who spilled into the space.

Both landlord representatives sheepishly wandered into the lobby to take the elevator. A younger black tenant began to dance and moaned “so hot, hot” as two leggy drag queens in boots with mini-handcuffs for laces passed by.

Bennett Baumer is an organizer with Met Council on Housing.