Representatives from three Iraqi labor groups conducted a U.S. tour in June discussing the occupation, insurgency and the state of workers’ rights and organizing in Iraq. Sponsored by U.S. Labor Against the War, the tour has sparked debate throughout the left internationally on how to resist the occupation. The three Iraqi unions all oppose the American-led military occupation – but differ on how to end it.

When U.S. forces invaded Iraq, bringing down Saddam Hussein’s government, Iraqi unionists devised a plan to fan out throughout the country and organize workers. The Iraqi Federation of Trade Unions (IFTU) formed out of these initial efforts. The Trade Union Federation is the largest of its kind and represents workers in sectors including construction, oil, longshore, transportation and mechanics. In December 2003, U.S. troops raided the IFTU’s offices and arrested eight union leaders, eventually releasing them without charge. 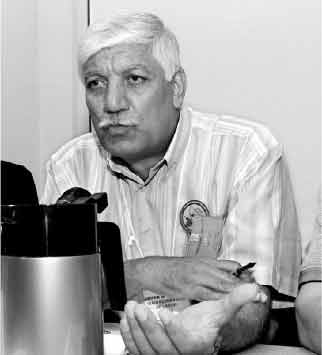 “We [IFTU] consider the U.S. and British troops occupiers,” said Adnan Al Saffar in Arabic. Saffar, executive officer of the Union of Mechanics, Printing and Metal Workers, gave a talk at Cornell University in New York City on June 17. “Our demands are the withdrawal of foreign forces in Iraq.”

During the early days of the occupation, American officials swept away many Hussein-era laws barring privatization and preventing the flight of capital, but they kept in place labor codes that outlawed strikes and independent labor organizing.

However, many leftists are critical of the Trade Union Federation. It is closely aligned with the Iraqi Communist Party, which served as part of the U.S.-installed Iraqi Governing Council; its successor, the interim regime of Prime Minister Iyad Allawi; and the current government. Allawi in particular drew the enmity of many Iraqis because he endorsed the devastating U.S. attacks on Fallujah, Najaf and Baghdad. As a result, many international leftists and Iraqis see the IFTU as collaborators. This accusation was probably a factor in the Jan. 4 assassination of the federation leader Hadi Saleh, which the union blames on the insurgency.

Little is known about the insurgency, but it is believed to include members of the former ruling Baathist party. Upon coming to power in the 1960s, the Baathists assassinated many communists based on information supplied by the CIA. Another trade union leader, Ali Hassan Abd of the General Union of Oil and Gas Workers, was assassinated on February 18. The Oil and Gas Workers also say insurgents were behind the killing.

The Federation of Workers Councils and Unions in Iraq (FWCUI), aligned with the Workers Communist Party of Iraq, doesn’t hesitate in labeling its unionist rivals as collaborators. “Today the ICP and the IFTU again are acting as tools to subject the interests of the working class to the interests of the USA, the puppet government, political Islam, ultra-nationalists and employers,” wrote Aso Jabar, international officer of the Workers Councils, in his union newsletter. Jabar’s union also opposes the insurgency.

The Federation of Workers Councils came from organizing unemployed Iraqis. In militant protest, they pressured the U.S. occupation authority and successive Iraqi governments for benefits. There is also tension between the two federations as to who will inherit the resources, such as office space and computers, of the former official Baathist union.

“I think the workers councils are worried [old resources] will all be given to the IFTU,” said David Bacon, a labor journalist who visited Iraq in May. However, Bacon added “without any question,” the IFTU is a much larger union.

The third union on the tour is the Oil and Gas Workers, which represents workers in southern Iraq. Oil workers threatened to strike in January 2004 and won wage increases. They have also closed a refinery operated by Halliburton because the company was importing lower-paid foreign workers. All three labor unions oppose the privatization of Iraq’s oil sector and economy. Al Saffar said Iraqi unions would draw a “red line in front of privatization and we will prevent this from happening no matter what sacrifices we take.”

The Oil and Gas Workers call for a withdrawal of American troops and for U.N. peacekeepers to secure the country, a scenario few consider possible. While each union backs the right to resist, none back the armed resistance, which they term reactionary.

“The workers should fight for both ending the occupation and curbing the influence of the local reactionary groups including those within the Iraqi armed resistance,” said Jalal Mohamad of the Federation of Workers Councils. “If this force is the armed resistance without progressive forces, the future will be bleak and gloomy. Iraq will end in civil war and in the hands of various reactionary militias. This fact is denied by the Western left.”