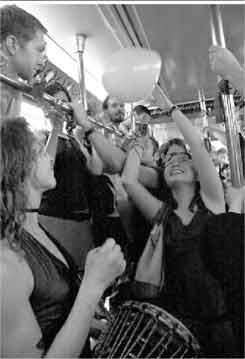 Freelance urban reclamation continues. The night of June 9, partiers train-jacked the uptown 1 train in carnival protest of the MTA’s recent elimination of the 9 train. Starting at South Street Ferry, artists with ActionDirection.org transformed a 1 train into a 9 train, covering the MTA’s house ads and corporate propaganda with fresh roses and “one more time for the 9” logos. Proving that the best parties are free, the uptown Broadway local was transformed into a rail-mounted guerilla party.

According to the Straphangers Campaign, the replacement of the 9 train by the 1 train along the nearly 15 miles of its route will add at least five minutes to the commute of Bronx residents. But on the night of June 9, that meant five more minutes of revelry.

Organizer Gideon Levy led chants and encouraged everyone to boogie down. Riders flirted and drank as beads of sweat rolled down their faces. Dance music emanated from a boom box and partygoers were swinging from the poles.

As the train moved northward, the party grew with each stop. Over 200 people were packed into the last two subway cars as they emerged from the tunnels and the lights of Manhattan were seen from the elevated tracks. Riders socialized into the Bronx and then moved on to party in Van Cortlandt Park into the small hours of the night. Kim Frankel, who just moved to NYC last week, said “It was the best party I’ve ever been to.”