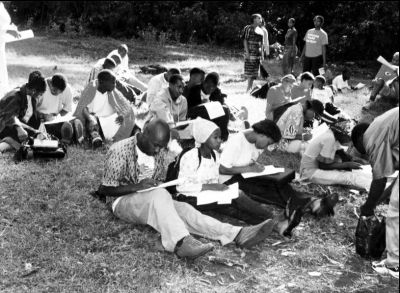 ARUSHA, Tanzania – Mruma is managing director of Chawakua, one of Tanzania’s oldest grassroots HIV/AIDS organizations.  Despite their numerous accomplishments, the dedicated staff has been working without salaries for the past three months. “We have even been three years without a donor,” Mruma laments.

Until three months ago, the 13-year-old organization had been funded by African Youth Alliance, which in turn received funding from the Gates Foundation. The program’s limited five-year contract allowed Chawakua to continue their activities of peer outreach, education and prevention, such as a hip-hop and dance competition combined with sexual health workshops and forums.

“While we look for another donor, we can lose our staff. They will go to look for salaries to help their families and then, we will get funding again and we start all over to train them. We really lose time that way,” says Mruma. Losing a donor just when the organization was beginning to flourish is nothing new for Chawakua, a scenario that has been repeating itself since its inception in 1992.

Donors come and go, often changing their funding policies in capricious manners. One funder chose to work in another region of Tanzania. “They told us they would find another donor for us, so we waited for six months. Then, they were told to leave the country and we were left with six months debt for the office rent. The landlord came and took our things,” Mruma explains.

FUNDING YOUTH-EDUCATION INSTEAD OF TREATMENT

Chawakua initially focused on communitybased treatment of HIV/AIDS. But donor money had not funded the continuation of such work, and was instead earmarked for youth education. Staff agreed to take 10 percent of their salaries and give it to support those infected or affected, by funding such services as antibiotics, vitamins, food and clothing. “We cannot turn these people away or the community will lose trust in us,” says Mruma.

Down the street from Chawakua the staff members of the nascent UVIWA (Partnership for the Youth and Women of Arumeru) are living proof of Chawakua’s effectiveness. UVIWA grew out of Chawakua to bring peer education to the outlying villages around Arusha. It was not long ago that Simon Gervas was on the receiving end of their services. When the 26-year-old found he was HIV negative he decided to use the experience not only to change his own life, but to also educate others, beginning with his friends in a soccer league.

Like Chawakua, UVIWA is also operating without a donor, subsisting on the funding of a sole individual. UVIWA reaches approximately 2,500 youth per year with a staff of five and an office too small to seat them all at once.

“We keep going because we really live as part of the issues. [Larger NGOs] can write very good proposals and get benefits for their organization, but then they lose focus of the real thing they are there to do” says Gervas, who now works as an HIV/AIDS educator in rural parts of the country.

Still, the volunteers and employees of such grassroots organizations insist there is a better way to connect the donor community with the fledgling community NGOs.

“Donors give instructions and say, ‘You should do this.’ But I think the best thing is to sit together and discuss so that the donor can get other ideas and start to really know the issues. It is even better for their money if decisions are made cooperatively,” says Asha Hassan, another peer educator at UVIWA.

In a climate of constant financial instability, organizations are looking for more sustainable sources of funding. “NGOs need to develop greater self-sufficiency, to look into diversifying funding sources. This way, they’re not forced to give up their own strategies, goals and objectives,” says a staffer at a U.S.-based AIDS organization.  She cites the example of Thailand’s “Cabbages and Condoms,” a popular resort and restaurant.

Senator Mechai Viravaidya, 1997 recipient of the United Nations Population Award, established the restaurant to fund AIDS education projects undertaken by the Population and Community Development Association. However, she recognizes that not every small NGO has the capital or business know-how to start a profitable enterprise. “The problem is, these are activists and health workers, not business people,” says Vivravaidya.

Chawakua and UVIWA find ways to continue their work because it is needed.  That may mean working without salary or cutting programming, but they persevere, writing proposals in hopes that donor money works its way through the chains of bureaucracy to their day-to-day work on the ground, though that can also create a new set of struggles. How long will the donor stay? What activities and visions will be sacrificed for financial support?

“We don’t have money, so when a donor says, I will give you money but you have to do this, this and this, what can we do? We will agree,” says Gervas.