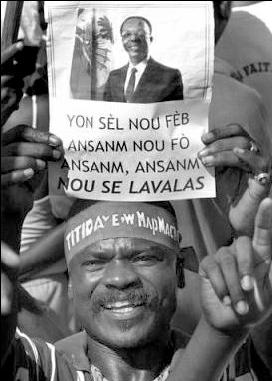 When U.N. troops kill residents of the Haitian slum Cité Soleil, friends and family often place photographs of exiled President Jean-Bertrand Aristide on their bodies. The photographs silently insist that there is a method to the madness raging in Port-au-Prince.  Poor Haitians are being slaughtered not for being “violent,” as we so often hear, but for being militant; for daring to demand the return of their elected president.

It was only 10 years ago that President Clinton celebrated Aristide’s return to power as “the triumph of freedom over fear.” So what changed? Corruption? Violence? Fraud?  Aristide is certainly no saint. But even if the worst of the allegations are true, they pale next to the rap sheets of the convicted killers, drug smugglers and arms traders who ousted Aristide and continue to enjoy free rein, with full support from the Bush Administration and the United Nations. Turning Haiti over to this underworld gang out of concern for Aristide’s lack of “good governance” is like escaping an annoying date by accepting a lift home from Charles Manson.

A few weeks ago I visited Aristide in Pretoria, South Africa, where he lives in forced exile. I asked him what was really behind his dramatic falling-out with Washington. He offered an explanation rarely heard in discussions of Haitian politics – actually, he offered three: “privatization, privatization and privatization.” The dispute dates back to a series of meetings in early 1994, a pivotal moment in Haiti’s history that Aristide has rarely discussed.  Haitians were living under the barbaric rule of Raoul Cédras, who overthrew Aristide in a 1991 US-backed coup. Aristide was in Washington and despite popular calls for his return, there was no way he could face down the junta without military backup. Increasingly embarrassed by Cédras’s abuses, the Clinton Administration offered Aristide a deal: U.S.  troops would take him back to Haiti – but only after he agreed to a sweeping economic program with the stated goal to “substantially transform the nature of the Haitian state.”

Aristide agreed to pay the debts accumulated under the kleptocratic Duvalier dictatorships, slash the civil service, open up Haiti to “free trade” and cut import tariffs on rice and corn in half. It was a lousy deal but, Aristide says, he had little choice. “I was out of my country and my country was the poorest in the Western hemisphere, so what kind of power did I have at that time?”

But Washington’s negotiators made one demand that Aristide could not accept: the immediate sell-off of Haiti’s state-owned enterprises, including phones and electricity.  Aristide argued that unregulated privatization would transform state monopolies into private oligarchies, increasing the riches of Haiti’s elite and stripping the poor of their national wealth. He says the proposal simply didn’t add up: “Being honest means saying two plus two equals four. They wanted us to sing two plus two equals five.”

Aristide proposed a compromise. Rather than sell off the firms outright, he would “democratize” them. He defined this as writing antitrust legislation, insuring that proceeds from the sales were redistributed to the poor and allowing workers to become shareholders.  Washington backed down, and the final text of the agreement – accepted by the United States and by a meeting of donor nations in Paris – called for the “democratization” of state companies.

But when Aristide began to implement the plan, it turned out that the financiers in Washington thought his democratization talk was just public relations. When Aristide announced that no sales could take place until Parliament had approved the new laws, Washington cried foul. Aristide says he realized then that what was being attempted was an “economic coup.” “The hidden agenda was to tie my hands once I was back and make me give for nothing all the state public enterprises.” He threatened to arrest anyone who went ahead with privatizations. “Washington was very angry at me. They said I didn’t respect my word, when they were the ones who didn’t respect our common economic policy.”

Aristide’s relationship with Washington has been deteriorating ever since: While more than $500 million in promised loans and aid were cut off, starving his government, USAID poured millions into the coffers of opposition groups, culminating ultimately in the February 2004 armed coup.

And the war continues. On June 23 Roger Noriega, assistant secretary of state for Western Hemisphere affairs, called on U.N. troops to take a more “proactive role” in going after armed pro-Aristide gangs. In practice, this has meant a wave of Falluja-like collective punishment inflicted on neighborhoods known for supporting Aristide. On July 6, for instance, 300 U.N. troops stormed Cité Soleil, blocking off exits and firing from armored vehicles. The U.N. admits that five were killed, but residents put the number of dead at no fewer than 20.  Reuters correspondent Joseph Guyler Delva says he “saw seven bodies in one house alone, including two babies and one older woman in her 60s.” Ali Besnaci, head of Médecins Sans Frontières in Haiti, confirmed that on the day of the siege 27 people came to the MSF clinic with gunshot wounds, three-quarters of them women and children.

Yet despite these attacks, Haitians are still on the streets – rejecting the planned sham elections, opposing privatization and holding up photographs of their president. And just as Washington’s experts could not fathom the possibility that Aristide would reject their advice a decade ago, today they cannot accept that his poor supporters could be acting of their own accord – surely Aristide must be controlling them through some mysterious voodoo arts. “We believe that his people are receiving instructions directly from his voice and indirectly through his acolytes that communicate with him personally in South Africa,” Noriega said.

To be published in an August issue of The Nation.