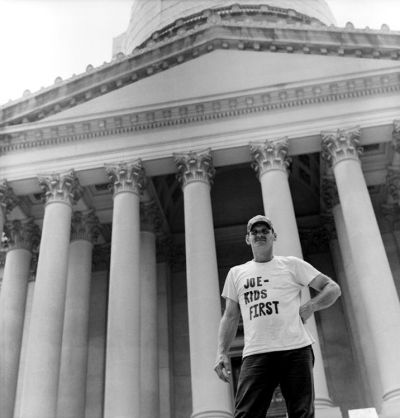 CHARLESTON, West Virginia—Tired of being ignored by a rapacious coal company and indifferent politicians, Ed Wiley of Rock Creek, West Virginia began a hunger strike on July 5. It was barely past lunchtime when he got what he wanted: a face-to-face meeting in the state capitol with Gov. Joe Manchin.

“I do believe we’ve opened up quite a can of worms,” says Wiley, who came to press his demand that the students of Marsh Fork Elementary be moved to safety from its current site, which Massey Energy has made toxic.

“You will see some changes in West Virginia, and I believe you’ll see some people shifted around,” adds Wiley, 47, whose 10- year-old granddaughter attends Marsh Fork Elementary, which lies directly beneath an earthen dam holding 2.8 billion gallons of coal sludge. Wiley refused to leave until Manchin spoke on the steps of the capitol. The governor promised television cameras that he would make sure the Marsh Fork students were safe. His impromptu press conference with Wiley came four days after the West Virginia Department of Environmental Protection (DEP) approved a permit for Massey Energy to expand its coal operations in Sundial.

Wiley’s hunger strike was the latest challenge to the state’s political establishment, which traditionally has had a cozy relationship with the coal industry. 16 people were arrested on May 31 at a protest outside of Massey Energy’s coal preparation plant in Sundial, West Virginia. Four more people were arrested at a June 30 protest at Massey headquarters in Richmond, Virginia.

Perhaps no one’s attitude toward the coal industry has changed more than Wiley’s. Six years ago he was helping Massey build roads, slurry lines and sludge ponds – the infrastructure of the devastating practice of mountaintop removal. “I was blinded by the $13.50 an hour I never had,” he says.

“I was blinded by the medical card I never had. I didn’t realize that I was setting up something that could one day kill my granddaughter. They’re putting a price on their own children’s head. Anybody who tells me these [dams] are not supposed to leak – that’s bullcrap. That is a lie.”

In Sundial, locals like Wiley and out-oftown activists are demanding not only that the children be moved to a safe school but that Massey shut down its preparation plant, coal silo, 1,849-acre mountaintop removal site as well as the 2.8 billion-gallon coal sludge dam.

“Massey wants it all. They are a cruel people. They don’t care what they do to you,” says Jackie Browning, of nearby Horse Creek. “They make this place so ugly.”

“THE GOVERNOR IS DRAGGING HIS FEET”

Two days after his meeting with the governor, Wiley and his supporters met with the heads of all the relevant state regulatory agencies to discuss the Massey plant’s harmful impact on the health of the community.

The newly attentive group of government officials also toured a proposed new site for Marsh Fork Elementary students. Wiley and his supporters gave Manchin five days to respond to their demands before returning to their campaign of nonviolent civil disobedience. Wiley’s initial hopefulness waned. “I’m about tired of waiting on them. The governor is dragging his feet,” Wiley told The Indypendent on July 15, after not hearing from Manchin’s office for a week.

Hours later, the governor’s office announced that the permit for Massey to construct a second silo at the site had been revoked. Manchin’s made his decision following a meeting with activists including Jack Spadaro, a whistle-blowing mining engineer. Spadaro dug up information to prove that both the existing and the proposed silos were illegally close to the school – within the 300-foot buffer zone guarding schools from mining operations. Massey had begun construction on the foundation for the silo in April, three months before the DEP granted a permit. “The governor is an ex-coal operator,” Spadaro said. “He’s not an environmentalist. Because it involved children, he had to get involved.”