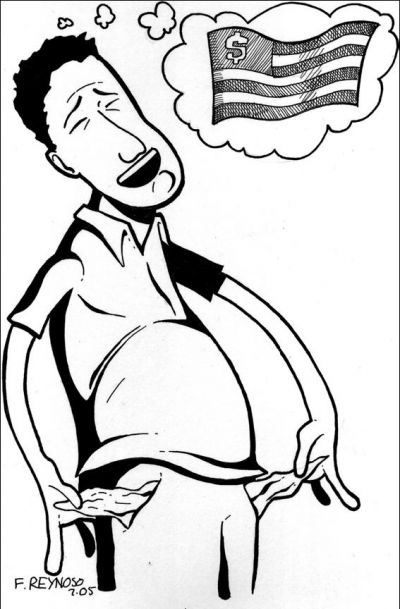 Michael is the type of person one would expect to vote in his selfinterest. Now in his early sixties, he lives in a modest house with his wife and two daughters and works a minimum wage job at a manufacturing plant, which he took in a 1990s recession after years of self-employment. Despite appearances, however, he identifies with the rich. “You may think I’ve given up, but I haven’t,” Michael says. “I am going to be rich someday.” Without concrete plans to propel him to riches, Michael nonetheless shares a dream held by many Americans. The “get rich someday” dream is cited by many as the reason Americans lend their political support to the wealthy, voting against their own economic self-interest.

The nation’s top 0.1 percent, some 145,000 taxpayers with an average income of $3 million a year, is amassing wealth at an unprecedented rate according to a recent study by the New York Times. Since 1980, they more than doubled their share of national income to 7.4 percent – the highest level since the 1920s.

The number of those with $1 to $5 million in net worth increased by 123 percent from 1983 to 2001, while those with between $5 and $10 million increased 304 percent. The super rich, with over $10 million, increased by 409 percent to 338,400. With his hourly wage paying his bills, Michael can only dream of reaching these sums. While some get rich in the technology industry where Michael works, with the top ten Silicon Valley CEOs alone taking home $578 million combined in 2004, they cannot compete with the nation’s truly rich.

HALF THE WORLD’S BILLIONAIRES

Nationwide, billionaires are richer and more numerous for the second year in a row, according to Forbes magazine’s 2005 survey. The Forbes 400 list of the richest Americans starts at $750 million, of which 78 percent were billionaires in 2004. In the past year, 69 more became billionaires, giving this country almost half of the world’s billionaires. In 2004, the combined net worth of the nation’s wealthiest was $1 trillion, an increase of $45 billion in one year.

Workers fared differently, however. Wages for most Americans didn’t improve from 1979 to 1998 and the median male wage in 2000 was below the 1979 level, notwithstanding productivity increases of 44.5 percent. Despite the 1990s’ income gains, the Financial Times reported in May that wages are falling faster than at any time in the last 14 years. Meanwhile hidden unemployment soars in this “jobless recovery.”

Borrowing is what leads to identification with the rich, say economists Fabrizio Perri of New York University and Dirk Krueger of Goethe University in Frankfurt, Germany. They trace the credit surge to the widening income gap between rich and poor from 1970 to 2000. Simply put, people feel richer because they consume more. From 1990 to 2003, median income only rose 6.5 percent, yet spending jumped 30 percent and debt increased 80 percent. Despite longer hours and lower pay, Americans mimic the wealthy by going ever deeper in debt to consume more. Since 2001, they cashed out $480 billion in home equity, 2.5 times more than they cashed out from 1993 to 2000.

Michael J. Graetz and Ian Shapiro, authors of Death by a Thousand Cuts, point out that most Americans, like Michael, misperceive their position. A 2000 Time/CNN poll found that 39 percent of Americans believe they are in the wealthiest one percent, or soon will be. They even supported Bush’s abolition of the inheritance tax, which only applies to the richest two percent of American families.

After Bush’s tax cuts, the 400 top taxpayers now pay at the same rate as those making $50,000 to $75,000 and many of the largest corporations pay no tax at all. Unlike the average wage earner, these people know their interests: 72 percent of the Forbes richest 400 who contributed to the 2004 campaign gave money to Bush.

Easily convincing Americans to lower taxes further, they are creating a new aristocracy.