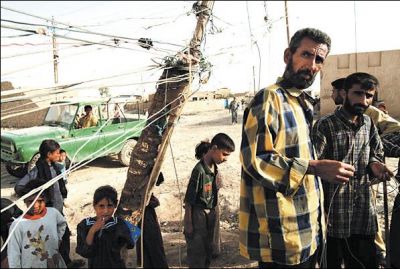 KARBALA, Iraq, June 4 – It should have been little more than an hour’s drive south from Baghdad. But it took an hour just to exit the checkpoints.

Along the road, a smashed car remained after colliding with a military vehicle. Iraqis complain that tanks sometimes drive over the tops of cars, crushing passengers.

Outside the city, progress was frustrated by a mile-long convoy of armored personnel carriers, tanks, humvees, and supply trucks waiting for deployment. Hundreds of civilian autos were forced off the four-lane highway onto a narrow dirt road bisected by railroad tracks. Traffic stalled, zigzagged and backtracked.

From the chaos and dust, a train sped by and sent vehicles squealing; then, relief that it wasn’t a car bomb.  The trip took nearly five hours.

Kenneth Booth, voiced support for United States democracy, human rights and “winning hearts and minds.” The soldiers offered an example. After a night house raid, troops would return to the neighborhood in the morning and distribute toys.

Despite this limitation, the military had begun five water and electrical projects, as well as schools and a nursing home. Maj. Booth felt that it was now “up to the Iraqis,” and that those who demanded more assistance were being unreasonable.  “They think every problem is a U.S.  problem,” he said.

In the country for nine months, Maj. Helmers was asked why he thought the U.S. had invaded Iraq.  “There are many reasons,” he said, “but mostly Saddam himself was a weapon of mass destruction. He killed Kurds and Shiites. He was working on other WMDs. We may still find them.”

He added that part of the 155th’s mission was “explosive ordnance disposal.”

Experts contend that one WMD –depleted uranium – is easy to find.  But American authorities have refused to clean it up or acknowledge its harmful effects. Conventional weapons also pose a danger. Live munitions have been piled along streets, unmarked due to a shortage of yellow plastic “caution” tape.

During a visit to the Karbala office of Iraqi Human Rights Watch, employee Hussein Al Abrahemy placed a cluster bomb on his desk. He claimed that citizens had unsuccessfully requested many times that the U.S. military retrieve these WMDs. However, cluster bombs were still being found throughout the city.

Children thought the yellow devices were toys. So on April 3, a committee headed by Ali Hamza of the Muslim Peacemakers Team decided to dispose of the ordnance themselves.

Attempting to clear a school yard of explosives, Hamza was killed.  The Army promised compensation, but the family has received nothing.  Responding to U.S. inaction, the Community of Victims’ Kin was founded, demanding that five percent of Iraq’s oil revenue be allotted to war victims’ families.

Maj. Booth’s statements about democracy and human rights have similarly been challenged. Ali Nassir of the Iraqi Council for Solidarity and Peace commented that the U.S.  Army “didn’t bring democracy.”

It may not have brought equality either. On the way out of Camp Lima Base were two latrines. One was marked, “IRAQIS ONLY,” the other, “NO IRAQIS – AMERICANS ONLY.”