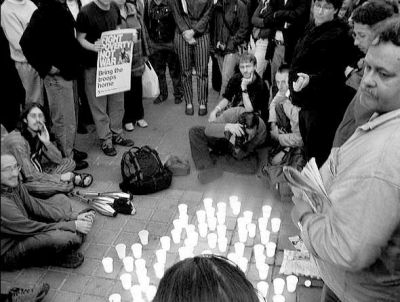 EDINBURGH MEMORIAL: Protests against the G8 turned to mourning as news of the London bombings spread.

During the last phase of the Troubles, the IRA targeted mainland Britain: it came close to blowing up Margaret Thatcher and her cabinet in Brighton. Some years later a missile was fired at No 10. London’s financial quarter was also targeted. There was no secret as to the identity of the organization that carried out the hits or its demands. And all this happened despite the various Prevention of Terrorism Acts passed by the Commons.

The bombers who targeted London were anonymous. It is assumed that those who carried out these attacks are linked to al-Qaida. We simply do not know. Al-Qaida is not the only terrorist group in existence.  It has rivals within the Muslim diaspora. But it is safe to assume that the cause of these bombs is the unstinting support given by “New Labour” and its prime minister to the U.S. wars in Afghanistan and Iraq.

One of the arguments deployed by Ken Livingstone, the mayor of London, when he appealed to Tony Blair not to support the war in Iraq was prescient: “An assault on Iraq will inflame world opinion and jeopardize security and peace everywhere. London, as one of the major world cities, has a great deal to lose from war and a lot to gain from peace, international cooperation and global stability.”

Most Londoners (as the rest of the country) were opposed to the Iraq war. Tragically, they have suffered the blow and paid the price for the re-election of Blair and a continuation of the war.

Ever since 9/11, I have been arguing that the “war against terror” is immoral and counterproductive. It sanctions the use of state terror – bombing raids, torture, countless civilian deaths in Afghanistan and Iraq – against Islamo-anarchists whose numbers are small, but whose reach is deadly. The solution then, as now, is political, not military.  The British ruling elite understood this perfectly well in the case of Ireland. Security measures, anti-terror laws rushed through parliament, identity cards, a curtailment of civil liberties, will not solve the problem. If anything, they will push young Muslims in the direction of mindless violence.

The real solution lies in immediately ending the occupation of Iraq, Afghanistan and Palestine. Just because these three wars are reported sporadically and mean little to the everyday lives of most Europeans does not mean the anger and bitterness they arouse in the Muslim world and its diaspora is insignificant. As long as western politicians wage their wars and their colleagues in the Muslim world watch in silence, young people will be attracted to the groups who carry out random acts of revenge.

At the beginning of the G8, Blair suggested that “poverty was the cause of terrorism.” It is not so. The principal cause of this violence is the violence being inflicted on the people of the Muslim world. And unless this is recognized, the horrors will continue.

Originally published in the UK Guardian.