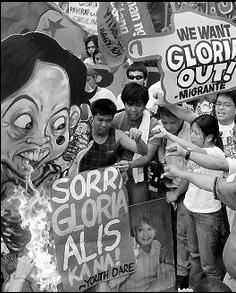 BURNING EFFIGIES are a staple of popular protest in the Philippines. Tens of thousands have demanded Arroyo’s resignation in the “Hello Garci” scandal.

On June 28, after three weeks of silence on the tape scandal, Arroyo admitted that she committed the indiscretion of talking to an election official and called it “a lapse in judgment.” “Dagdag-bawas,” a Tagalog expression for “vote padding and shaving” is virtually a given as the ruling elite pass the presidential baton from one clan to another. Never has a person outside the richest one percent been elected to the presidency, nor a person without the blessing of the U.S. government.  The U.S. is backing Arroyo emphasizing that the “rule of law” must be followed, and utterly terrified of another “People Power” upsurge of the type that has already ousted two U.S.-backed rulers.

Every day in the Philippines, tens of thousands are taking to the streets to demand that

Arroyo resign or be ousted. Pressure is growing from the mass organizations of the left, opposition political parties, organizations of professionals, business groups, and retired military and police officers.

While political insiders want to replace Arroyo with her equally reactionary vice president, grassroots organizations advocate a “Transition Council” that would include representatives of the poor and marginalized sectors. Among the tasks of the council would be to conduct an investigation into the vote-padding scandal and implement electoral reforms. Other goals include canceling the country’s onerous debts and protecting the country from the ravages of free market globalization.

These issues are indicative of Philippines’ grinding poverty, injustice and state terror.  Nearly 60 percent of the annual budget goes to pay foreign debt and the military. At the same time, the government’s central “labor policy” is to export labor, and now 10 percent of the population lives abroad. In the first half of 2005, soldiers and death squads killed more than 35 activists in various provinces. In November 2004, seven striking farm workers were shot down by soldiers on a picket line at the Hacienda Luisita plantation in central Luzon.

Arroyo is seen as joined at the hip with the U.S. administration. Hers was the first government leader in Asia to join Bush’s “war on terror” crusade, hosting up to 5,000 U.S.  troops for “joint training exercises.”

The Filipino people are not only fighting with picket lines and demonstrations.

In a recent statement, the CPP said: “For the Filipino people, the crisis besetting the Arroyo regime is a good thing. It opens the possibility of advancing their most urgent demands. More importantly, it provides the conditions for pushing forward the people’s war closer to final victory.”