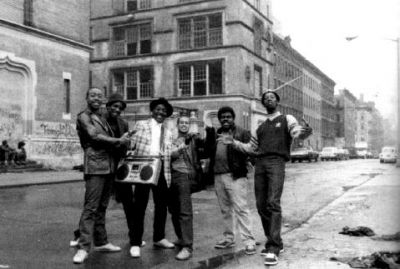 Jeff Chang has the good sense to understand that political movements move forward by looking backwards. Perhaps that’s why Can’t Stop, Won’t Stop feels like an intervention as much as a history of rap music. By insisting that “generations are fictions” Chang is challenging the new school not to accept the boundaries set by pop culture and sociologists. “Whom does it include?” Chang writes of the hiphop generation: “Anyone who is down. When does it end? When the next generation tells us it’s over.”

This is a bold statement that cuts to the heart of the current orthodoxy of “keeping it real.” For Chang, hiphop has always been a balancing act, a particularly African-American art form that has borrowed heavily from world culture; a music that can move the crowd and recreate community, at the same time priding itself on fragmentation over staccato beats. “Hip-hop generation brings together time and race, place and polyculturalism, hot beats and hybridity,” Chang writes in his opening salvo; for him hip-hop is the soundtrack of globalization. Then it’s no wonder that he locates hip-hop’s start at the beginning of the neoliberal period of the mid-1970s. Then, the empire struck back at popular movements through austerity measures on Third World countries and urban budget cuts at home. The flight of jobs to the suburbs, along with a disappearing social safety net, turned large sections of American cities into bantustans. From Los

Angeles to the South Bronx, a new generation faced a crack epidemic, AIDS and massive unemployment.

But nature abhors a vacuum; Chang documents the growth of street organizations as political vehicles, from the earlier alliances of Bronx street gangs and the Young Lords to the early peace treaties between Blood and Crips after the 1992 Los Angeles rebellion. These examples of politics from below (even outside the purview of the traditional left) give hip-hop its early urgency and hopes that it would create a new revolutionary movement. Still, a critical tension remains between art and politics.

Media critic Bill Stephney put it best: “Woe be it unto a community that has to rely on rappers for political leadership,” he said. “Now that our community leaders cannot take up their responsibility, you’re gonna leave it up to an 18-year old with mad flow?”

Today, most political rappers have understood Stephney’s challenge and have aligned themselves with or created political movements. M-1 of dead prez was the former president of the New York City Chapter of International People’s Democratic Uhuru Movement; Boots Riley of The Coup was a founder of the Young Comrads, while Mos Def and Talib Kweli continue working with Black August, a hip-hop concert series sponsored by the Malcolm X Grassroots Movement.

But perhaps the power of hip-hop lies not only in political organizing but also in the ability to capture hearts and minds. Hiphop was most real when it didn’t have to take itself so seriously; when the idea of performance was intertwined with a political agenda. Groups like Public Enemy and Boogie Down Productions moved the crowd not only through music, but through visuals as well. Taking advantage of the new medium of video, they modeled the self defense strategy of the Black Panthers and Malcolm X. I still remember my heart racing seeing KRS-One peering out a window, holding an Uzi, in veneration of Malcolm X on the cover of My Philosophy.

Back then, though, hip-hop was the plaything of street rebels and art students. Now it’s a multibillion-dollar industry where image is everything. Voices of dissent are marginalized; Wild Pitch Records paid close to half a million dollars to suppress The Coup’s Genocide and Juice album and dead prez have been declared persona non grata in almost all NYC nightclubs. The political mission of this hip-hop generation is twofold: power not only on the streets, but on the airwaves as well.  Chang points to the work of the Third Eye Movement in the Bay Area over Prop 21, as well as the Hip-Hop Political Convention on the East Coast as examples of folks freeing minds, with asses following.

Still, will this generation fulfill its mission or betray it? In reading Can’t Stop, Chang doesn’t have the ultimate blueprint. As a music journalist he has written a beautiful, accessible map, but avoids the tough task of bringing it all together into a political statement.  However, one wonders if it’ll take a book to bring about a new chapter of hip-hop history or the very people reading this newspaper. Or, to paraphrase Mos Def: hip-hop isn’t a giant in the mountain side, hip-hop is us.

This review will appear in the forthcoming issue of Left-Turn Magazine.