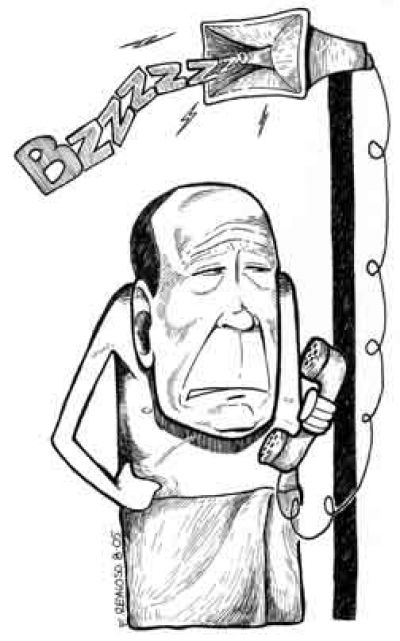 And then Brad [then-Pataki chief of staff Brad Race] calls me up and says, ‘You really can’t call these people like that’… I said, ‘Brad, does Barbara DeBuono work for us or do we work for her?’ … ‘Joe Mondello can’t get a goddam job, and it still hasn’t been done yet.’ It’s utter bullshit.”

Mrs. Pataki, complaining that she doesn’t get as many photo opportunities as Donna Giuliani, is heard to say, “It’s not that I’m not photogenic.”

The tapes were made in 1996 or 1997 and leaked to the Post anonymously. The Post called the tapes “explosive.” Missing the scoop, the New York Times yawned, and said “no shocking revelations.”

For a governor who has railed against the Fourth Amendment’s bar on unwarranted taping as a “technicality,” it’s lovely to hear him call for a federal investigation of these intercepted conversations.

The law in the state of New York and in most jurisdictions (pre-Patriot Act) makes it illegal to tape a conversation without a court-issued warrant unless one party consents to the recording.

Even where there is no cause to suspect criminal activity, we are all vulnerable to the trust we place in our friends. Not an ideal state of law, but it is well settled. (All involved in the recent releases deny giving consent or being the recorder.)

George Pataki has for years advocated for much less restrictive laws on intercepting communications. And 9/11 gave him the opportunity to pass much of his pro-prosecution agenda, rushed into law with great fanfare on September 17, 2001. (By comparison, Congress took three weeks to swallow the Patriot Act.)

But Pataki and his Attorney General Eliot Spitzer didn’t get everything they wanted. The strange duo renewed their cry for more enforcement powers later in 2001, headlining their November 1 press release, “Measures to Help Law Enforcement Fight Evil Scourge.”
Within the release, the governor says, “The citizens of New York cannot afford to bestow on defendants accused of terrorist acts the windfall of the exclusionary rule if a police officer makes an honest mistake in the recovery of evidence.”

What the governor is referring to is an exception to the Fourth Amendment’s exclusionary rule. The exclusionary rule prohibits the use of evidence in criminal prosecutions if it has been illegally obtained. The United State’s Supreme Court has permitted illegally obtained evidence to come into court when the police had a “good faith” belief that they were acting lawfully in intercepting the evidence.

But New York’s Court of Appeals, the state’s highest court, interprets the state constitution as providing more privacy protection than the Fourth Amendment. In People v. Bigelow (1985), the Court of Appeals rejected the so-called “good faith” exception, reasoning that in accepting the officer’s platitudes, “a positive incentive is provided to other [officers] to engage in similar lawless acts in the future.” The Court of Appeals recognized that allowing law enforcement officers to claim their intentions were honest, even though they violated the defendant’s rights, would completely destroy the exclusionary rule.

Somewhere along the line, our governor must have come into contact with the law, because he was careful to characterize the release of the tapes as “unethical and potentially illegal.” He knows that under current state law, if any party to the conversation decided to tape it, even unbeknownst to him, it meets legal standards.

As far as ethics go, his concern seems to be only for himself, as he is willing to subject the rest of us to the “good faith” of his state troopers.

The People’s Lawyer column is a project of the National Lawyers Guild, New York City Chapter. Contact the chapter at www.nlgnyc.org or at (212) 679-6018.