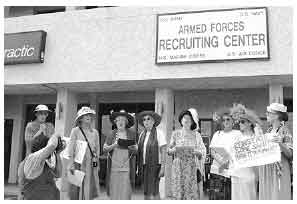 TUCSON, Arizona—Five women between the ages of 65 and 81 attempted to enlist in the U.S. Army and were arrested for criminal trespassing. Topped in Victorian hats and singing antiwar lyrics written to popular songs, the Tucson Raging Grannies surprised the world when they said they were serious about joining the Army.

“There are so many roadside bombings, and our soldiers are just targets over there,” said Ellouese Upton, 75, a recent member of the Tucson group.  Upton, like the other Grannies, feels that she has lived a long life and had the opportunity to raise a family. So she is willing to trade places with a young service man or woman in Iraq so they could come home and do the same.

The Tucson Grannies had their charges dropped in August after city attorneys felt the charges would have been difficult to prove.

The action, which was their first direct action, provided the fuel for Raging Grannies across the country to take the antiwar movement a step further. On Sept. 7, the Raging Grannies of Maine attempted to enlist in the Southern Portland Military Recruiting Office while singing, “We can teach peace, that violence and wars must cease, that we want our young to come back home, that’s why we’re here today.” For many such women the antiwar movement is deeply personal.  Upton, for example, has three grandsons in the military. “I told each one of my three grandsons that I would get them to Mexico.  I don’t believe this war has anything to do with national security, and they don’t understand they are being used to secure oil.”

Counter-recruiting efforts have intensified across the country in the last several months. In Pittsburgh, six demonstrators were arrested, two were shot with tasers, and a 68-year-old woman was bitten by a dog, after a storm of people protested the recruiting center there in August. In May, four U.S. military recruiting offices in Seattle were shut down when demonstrators blocked the entrances to protest recruitment practices and to oppose the war on Iraq. In the tradition of wise women elders, the general mission of the Raging Grannies chapters is to promote global peace, justice, and social and economic equality by raising public awareness song and humor. For the last several years, these women have participated in protests against not only war, but also sweatshops, pollution, nuclear weapons, Wal-Mart and the Ford Motor Company. The Grannies say they will keep raging until the war is over, including participating in antiwar demonstrations on Sept. 24.

“We’ve been talking among ourselves, we are feeling the need to include unhappy grandpas,” said Patricia Birnie.

“There are many peace loving men, including many who are ex-military and have seen war. What about Raging Geezers and Grannies?”