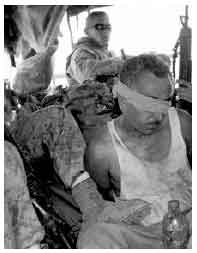 Katrina wiped more than New Orleans
off the map—it wiped coverage of the Iraq war almost completely out of the news. The single deadliest event of the occupation —the stampede on a bridge in Baghdad during a religious festival that killed almost 1,000 people on Aug. 31—was overwhelmed by the flood of hurricane coverage.  But the war, insurgency and sectarian strife continue with no end in sight. One U.S.  Army colonel told reporter Tom Lasseter that troops are locked in a stalemate with insurgents in the key province of Al Anbar.

“I don’t think of this in terms of winning,” said Col. Stephen Davis. Lasseter wrote that Davis “expects the insurgency to last for years.”

“It’s a war of attrition,” added Marine Maj.  Nicholas Visconti. “They’re not trying to win. It’s just like in Vietnam. They won a long, protracted fight that the American public did not have the stomach for.” The latest gimmick to defeat the insurgency is the constitutional process, but it’s only sharpening the sectarian lines by enshrining “federalism.” The proposed constitution allows for the Kurdish north and Shiite south to break off with the bulk of Iraq’s oil wealth, leaving Sunni Arabs (and millions of poor Shiites) in the center with little more than sand and 138,000 heavily armed U.S. troops.

The constitution is set for a national plebiscite on Oct. 15, but with weeks to go, the national assembly has yet to finalize the document, meaning it can’t be printed and distributed to the public.

Many Sunni Arabs and Shiite supporters of the popular cleric Moqtada Al-Sadr are registering to cast a no vote. Under the electoral process, if three of Iraq’s 18 provinces reject the constitution by a two-thirds majority, the document fails, the assembly is dissolved and the process starts from scratch.

At the same time, the U.S. launched its latest all-out assault, this time near the Syrian border in the city of Tal Afar. With some 200,000 residents it’s almost as large as the devastated city of Falluja. Similarly, most of the city’s residents reportedly fled in advance of the attack.

Of the residents who remained in Tal Afar, all “military-age” men were rounded up and paraded before masked informants who decided their fate: release or prison.  By using 5,000 Kurdish forces (along with nearly 4,000 GIs) in the attack on Tal Afar, the U.S. military is brazenly inflaming ethnic tensions.  Almost daily, reports are surfacing of bodies turning up and mass executions by Iraqi security forces. At the same time, bombings continue against Shiites – with one in Baghdad on Sept. 14 killing more than 75 day laborers.  The U.S. military is conducting a series of rolling assaults on Sunni regions – Tal Afar, some 90 percent Sunnis from the Turkmen ethnic group, was followed by an attack on the Sunni town of Haditha. The attacks are meant to compensate for U.S. forces stretched too thin to hold the regions they raid. But it may be part of a possible U.S. strategy.  During the run-up to national elections in January, U.S. troops combined military raids with electioneering, ensuring that Sunni Arabs would reject the elections wholesale as a rigged process.

Now, with hundreds of thousands of Sunnis being displaced or rounded-up during these assaults, it appears that the U.S. military may be trying to cleanse the voting roles in advance of the Oct. 15 referendum.  Sunni politicians have explicitly charged that the Iraqi government is deliberately rounding up members of their community to prevent them from registering. This led to the release of 1,000 detainees from the notorious Abu Ghraib prison on Aug. 27.

The Bush administration appears to be gambling that provoking a civil war may allow it to defeat the insurgency. The question is will it—and Iraq—be able to weather the coming storm?